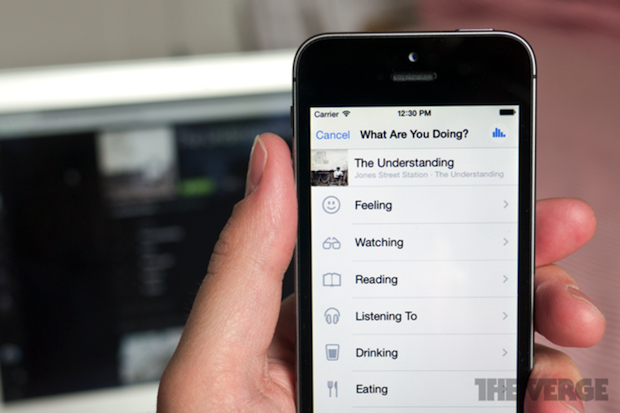 Image via The Verge

Last month, Facebook rolled out a new automatic audio tagging service a la Shazam, allowing people to use their smartphone microphones to automatically identify, tag, and share the music around them. From a musician's perspective, this is essentially a new way for fans to quickly identify your songs, share them with friends, and make purchasing tracks more seamless.

For music marketers, the ability to track what music people are listening to creates new possibilities for learning about consumers' listening habits and targeting ads. However, automatic music tagging has raised some privacy concerns for people worried that Facebook will be eavesdropping on our daily lives via our microphones. Here's what you need to know about how Facebook's music ID service is changing the way you get your songs tagged, what Facebook is listening for, and how audio fingerprinting could affect the future of music marketing.

Using the microphone in our smartphones and tablets, Facebook's app listens to our surroundings and makes a digital audio fingerprint of the music and sounds around us. This audio fingerprint is then compared to a database of registered songs and TV episodes, and if there's a match in the audio fingerprint database, Facebook gives you the option to seamlessly share the song you're listening to or the show you're watching with your friends. The post your friends see shows them the song and includes a hyperlink to preview a 30-second clip. It also includes a link to purchase the song in various music stores.

Rather than using audio finger-printing to block music piracy, Facebook is encouraging fans to identify and share the music they love.

Athough music tagging on Facebook is not new, the audio fingerprinting technology is being implemented to improve the accuracy of tags. The feature is being touted as an improvement over older, more complicated systems that attempted to identify the names of bands and songs in posts (an article by Brian Whitman of The Echo Nest explains the frequent errors made by older tagging services that often led to dead end links and false attributions).

By using a central database of songs and providing links to preview and make purchases, Facebook is trying to make it easier to share experiences rather than just status updates. The social network wants to encourage greater emotional engagement with the platform –  a feature that will be valued by advertisers striving to compile ever more detailed profiles on consumers.

In response to growing privacy concerns, especially after recently releasing information on a controversial secret Facebook study conducted on more than 700,000 users in 2012, Facebook answered several questions about privacy related to the new music tagging service. The social media service was quick to point out that the microphone is not always on, and only listens to 15 seconds at a time when people are making a post. They also state that the service does not store the audio fingerprints it records, and that enabling the microphone/using the music tagging service is optional.

People who do use the service will be contributing anonymous information to Facebook. It will document which songs you attempt to tag, regardless of whether you decline to share those tagged songs with your friends. Presumably, the data about which songs and shows people are listening to will be used to woo advertisers and could provide valuable information for record companies searching for trends in our music listening habits. Of great interest for music marketers, it is possible that such data on individual listener preferences could one day be used to target ads for specific concerts or albums to people who previously tagged music by those artists in the past.

How to get your band's music tagged on Facebook

Facebook's new audio fingerprinting based technology relies on data from Audible Magic, the same service used by Vimeo and MTV, among others. To make sure your band's music is "listenable" and available for tagging on Facebook, you will need to submit your music to Audible Magic for fingerprinting. If you have a record deal, this may have been done for you already (you can check on Audible Magic's MyRightsView platform). The first five songs are free to upload, after the freebies you can buy bundles of upload credits that end up costing between 40 cents and $1 per track. See my post on Vimeo's audio fingerprinting for more details on how to upload your songs to the Audible Magic database, as well as a look at the pros and cons of fingerprinting your music. Keep in mind that if your music is not part of the Audible Magic database, fans will not be able to use Facebook's app to find out who you are, and they will not be able to quickly share links to your music with their friends.

Jamie Davis-Ponce is a professional musician and graduate of Northeastern University's Master of Music Industry Leadership program with a concentration in entrepreneurship. She has been a music lecturer at Ithaca College, and is deeply involved in Boston-area arts and music organizations.