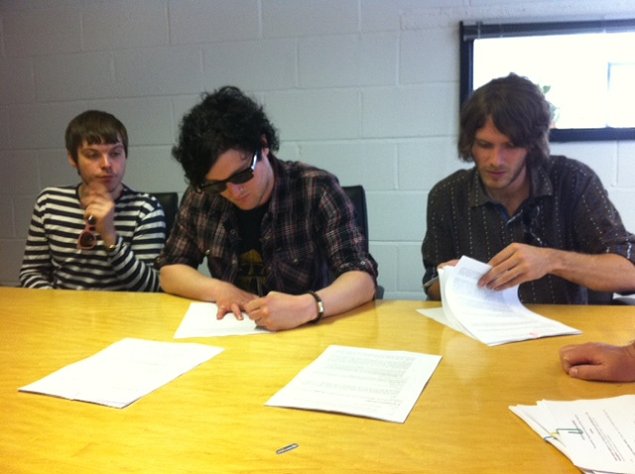 Due to the ever-changing nature of the music industry, record labels have been making quite a few changes to figure out how to stay in business. As we all know by now, record sales have been diminishing, so labels have been “forced” to find additional ways to make (and take) more from artists in order to have a shot at making a profit.

The latest trend in recording contracts is the 360 deal, in which any income that an artist may earn while under contract – not just record sales – can be collected by the label. Anything but a 360 deal of some type for a new artist today is extremely rare, because the only somewhat reliable revenue components for artists today are touring and merch – and the label needs to get some piece of that just to cover costs and make the gamble safer.

"The handful of instances that I have seen where artists were able to really bargain down the 360 elements of their label deals were where they became overnight internet sensations, or cultivated a strong following,” says entertainment attorney Ryan Lewis. “Even then, I have not seen any brand new artist in the past five years get all 360 elements eliminated from their contracts.” The key is to be flexible, adaptable, and gain enough leverage that the ball is in your court.

How do you gain leverage as a new artist?

In some cases, a 360 deal may be worthwhile – but more than likely, if it’s presented to an artist who has little leverage (a small following, little record sales, no radio play, etc.), the deal will not allow for the artist to make money, unless massive success is achieved.

Without leverage, the most common complaint I’ve heard from newly signed artists is that they’re locked into their deal with no commercial album put out in the two years they've been signed, and the label says that they have a tab to repay with interest if they want to get out… if they can get out.

The key to gaining leverage in negotiating a more reasonable record deal is to show the label that you can deliver in one or more reliable revenue streams, whether that's touring, publishing, or another revenue stream. It doesn't matter to the label – they just need to be able to bank on covering some minimum artist development burn rate. Upside isn't enough anymore unless it comes with that guarantee.

You don't have to attain Macklemore-level success to create some leverage, but you will need to build your career to the point where it makes sense for a label to do business with you. You can create quality songs, hone your craft, develop your sound, and promote your music on a small budget, so don't wait for someone to do it for you.

Which red flags should you try to negotiate out of your recording contract?

Artists must arm themselves with skilled music attorneys to negotiate certain removals or certain untouchable categories, as well as negotiate the percentages of income shared.

First of all, any label that asks you to pay up front for their services, which they will then also be taking a commission or net profits for successfully performing, is an immediate red flag that the deal isn’t legitimate. If a company really believes in you and wants to push your music, they'll do it for nothing up front.

But assuming you're dealing with a legitimate label, here’s what to keep an eye out for in the contract:

The goal is to make sure that you can control as much of the recording and creative process as possible, as any time the label mandates use of a specific producer, featured artist, recording facility, etc. (with whom they may have side deals anyway), they will be negotiating and deducting the value of those elements from your future royalties and/or advances. It's really just a matter of negotiating the age old "net profits" elements and terms, which include recording costs, various distribution costs, manufacturing costs, touring costs, marketing costs, and all other major defined terms that comprise the expense side of the "net profits" valuation.

If you have the leverage, try negotiating out "mechanical royalties" from the cost column of the "Recording Costs" definition. You definitely don't want the label deducting that as a "cost" in determining the ultimate value of the royalty they pay you.

3. Require your written approval for costs

In terms of controlling costs unknowingly charged to your future royalties by the label, try to negotiate out the label’s ability to step up and pay for various costs without your written approval. The relevant language will usually be found in a clause defining "Deficiency Payment" and/or "Additional Payment." Do not allow the label to have carte blanche in determining what they can and cannot charge for things that you "need," unless they get written approval from you first.

Don't get locked into a multi-album deal, although they will turn it into a seemingly worthwhile option where you can renegotiate (certain terms, within certain limits) after album one. While the flexibility to renegotiate better terms for subsequent albums is ideal, you’ll want to come into the negotiation knowing specifically what you need from the label to be able to blow up, and get firm commitments from them that they will give you that within a prescribed time period.

At some point in your music career, you may exhaust your resources and arrive at a point where you’re either going to sink or swim. You may decide that you need to make a jump to reach a wider audience, and you’ll probably have to aim for a smaller slice of a bigger pie to achieve that. A label isn't always the enemy, and there are countless examples of bands that have thrived on labels. That being said, the advice I always give to artists is to not sit back and wait for a label. Don't count on them to save you – save yourself and make them come to you. That's where things really shape up nicely for an artist. So stop being lazy, stop being scared, stop saying, "Tomorrow we'll write our best songs," and do it today. Learn, listen, be open, and believe in yourself. The rest will fall into place if you want it badly enough. A 360 deal can't stop a 360 believing artist.

Ari Goldstein’s career in the music industry began when he funded the release of O.A.R's debut album, The Wanderer (1997). After successfully pursuing a career in digital music marketing and working as an MC in Ordinary Peoples for 12 years, he began managing New York band DREAMERS (members of Motive) in 2011 and has been actively working in the industry ever since. Ari is the co-founder of AK Artist Group, a creative management company based out of New York City. He works with an eclectic roster of artists, including buzzing bands Mainland, DREAMERS, The Teen Age, Silverbird, and Challenger.

Contributions to this article were made by Ryan Lewis, who has been an entertainment attorney for four years with a focus on music and film.