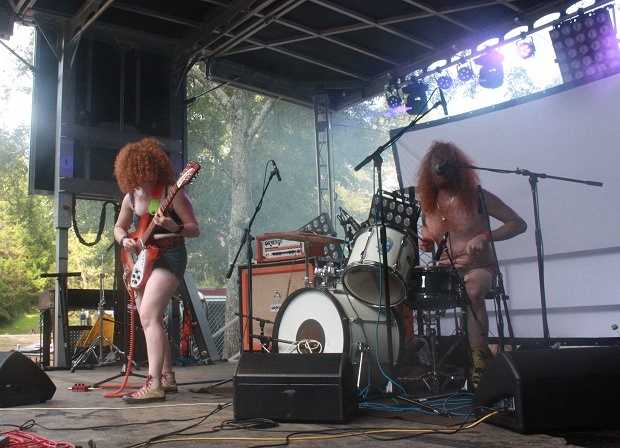 For a select few musicians, some level of stardom is achieved at some point. Or at the very least, consistent touring is an option, leaving no time for full-time work because he or she is generating enough cash from playing live to pay rent. As glamorous as a life completely devoted to the music you love may sound, here are a few things to keep in mind before diving into a full-time chase of the rock 'n' roll dream, paired with sage advice from actively touring musicians.

1. It'll start slow, and then you'll be even busier than before

First and foremost, don't expect your downtime to be filled with leisure. Career musicians have just that – a full-time career centered on their music. But hey, when you do have downtime, you'll likely have sky miles to burn after all the traveling that comes with being a full-timer. For a glimpse at one full-time musician's touring schedule, check out Alex White of White Mystery's itinerary. Being in a position to have a full-time schedule handling band business, White had to learn patience. "Before quitting the day job? Wish I knew that while the start of self-employment would be slow, it would eventually catch up," she says.

[How to Balance Your Day Job With Your Music Career]

2. There's no shame in picking up a part-time shift when you're not on tour

Quitting your day job, or at least your main stream of income, for music doesn't mean you'll never make money outside of playing shows or selling merchandise. Many musicians in consistently touring bands still pick up a shift here and there at a job when they are in their hometown. Others have the occasional DJ night that pays a set amount, and often comes with a drink and food stipend. So like other musicians, you may still work every now and then, without having to compromise tour plans or band rehearsals.

Guitarist Andrew Elstner of stoner rock giants Torche spends ample time touring the States and Europe. He also picks up shifts working the door at Atlanta venue 529 when he's home. "Have a job you can leave and come back to," Elstner explains. "Learn an industry trade: bartending, bar backing, serving, door guy, hair stylist, house painter, or amp/guitar repair.... Any independent gig, obviously. There's zillions to choose from and/or cultivate. The most classic wrong move are the bands that don't yet draw a regular, solid crowd (100 plus) that want to quit their day jobs and when they do, feel entitled to more money because of... what, your sheer commitment? It all also depends on what you want. You can have a rad band, never tour, and be happy. And I should add, the above info is stuff I wish someone had hammered into me in my late teens, early 20s."

And remember that it's more likely to replace a job, even in this economy, than it is to once again be in a position to gain further exposure for your music. "I quit my well-paying day job for the Run the Jewels tour we went on," says Colin Boddy of current Warped Tour act Baby Baby. "No regrets. I can always get another one…. In order to actually make it in this scene, you can't hold a full-time job. That's the difference. You've got to be on the road at least 150 days a year, and no [full-time] job will allow that."

3. Be prepared for it to not last forever

For various reasons, some career musicians later reenter the work force. For some, the band just doesn't work out, be it because the group splits or an individual steps away. In these instances, that stream of money dries up eventually, leaving former road warriors with a choice to make. Some return to a previous job, while others pursue higher education and an even better career than serving pizza or playing rock 'n' roll. Even if things aren't meant to last, enjoy the ride. Most bands forming in suburban garages won't get a shot at legitimate career aspirations, so appreciate being one of the lucky few that realizes the dream.

To lessen the blow, either when you stop working full-time or once touring ends, plan ahead financially. Heather Gmucs of Cleveland's Goldmines simply says, "Bankroll while you can." That’s sage advice, as money disappears faster when there’s no way to replace what’s been spent.

Leaving work may never seem 100 percent rational, unless your band breaks overnight. So ultimately, the decision is about priorities and not financial stability. "In the end," says Erica Qualy of Memphis-based project Fredd Velvet, "realizing our passions is worth more than a nine-to-five paycheck."