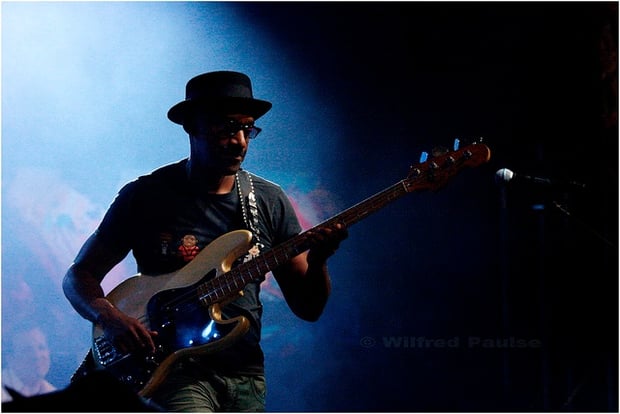 A peculiar type of stoicism is expected of most bassists. The best bassists are unflappable even when the rest of the band is faltering. A lost singer can listen for the low end to get back in the groove, and an overly experimental guitar solo can be grounded by a steady bassist. While everyone in a band loves a good bassline, you're unlikely to hear anything about your playing unless it's bad. In fact, a bassist is often expected to be able to craft perfect lines for a new song with little more than a demonstration of the chords on guitar. That kind of dependability does not come easily despite what the more treble-minded musicians may think. However, with these tips, you can exceed the high expectations of your bandmates. (Just don't expect much gratitude for it... though if you're the kind who cannot bear to live without recognition, chances are you're not bold enough to play bass.)

I want to clarify up front that these tips aren't intended as a substitute for writing out a musically correct part for your instrument. However, in my experience as a bassist, I've been forced to come up with a bassline on the fly very often, and what I've outlined below will get you sounding closer to a completed bassline when you're hammering out a song with your band.

1. Lock in with the drummer

The most important thing when playing bass is to be in time with the drummer. Even playing the right notes comes second to this. This video features Flea and Chad Smith of RHCP improvising together. Of course, their coordination is near superhuman and they had some time to plan ahead, but they demonstrate a good connection between drummer and bassist.

At the end of the video, Smith shows how he uses the kick drum to match the accents on Flea's bassline. If you're improvising a riff, you should try to match your notes as closely as possible with your drummer's kick. This will create a solid rhythm for your band to play over (so if the rest of the band is out of time with you and the drummer, they can't blame anyone but themselves).

The second most important thing to do after getting into a rhythm is to play the right notes, which brings us to the next point.

2. Focus on roots and fifths

Pick out root notes as soon as possible. Even the most repugnant band members are likely to tell you what the root notes are, or preferably give you a chord chart – though I've learned not to count on that "luxury."

Some great bass riffs rely almost solely on the chords' roots and octaves. Especially with jazz and metal songs that may feature minor seventh chords with a flatted fifth (m7b5), you can never go wrong by sticking to the roots and octaves, regardless of what the chords are.

However, you're probably going to want to embellish at least a little bit when you can. Once you have the roots of the progression down, you can play the natural fifth of each root note over any major or minor chords. It's possible, but highly unlikely in most songs, for the natural fifth to be a wrong note.

3. Choose between major and minor modes

With a little practice and ear training, you should be able to pick out whether the chords you're playing over are major or minor. I'm sure many of our readers are already able to do this without thinking about it. Using these two modes can help you make an improvised bassline truly interesting. Using the Ionian mode for major chords and the Aeolian mode for minor chords is a safe bet in most forms of music. I tend to rely on the patterns below.

A trick I developed (though I doubt I'm the first to use it) is to use my second finger on the root note of any major chord and my first finger on the root of any minor chord. This puts the modes I want to riff on easily within reach. Of course, these fingerings are not going to work over absolutely every chord progression, but when you're forced to improvise, you may not have time to ID all the chords you're playing over perfectly. If you practice shifting between these modes over chords, you'll be able to get the sound of a completed walking bassline over almost any song, or you can always just keep it simple and stick to roots and fifths. Try to get the modes below into your hands for one position access to all of a chord's tones. 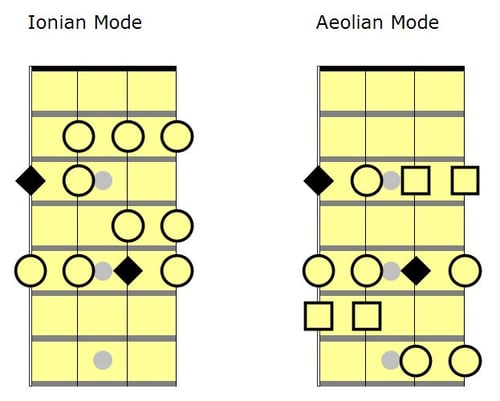 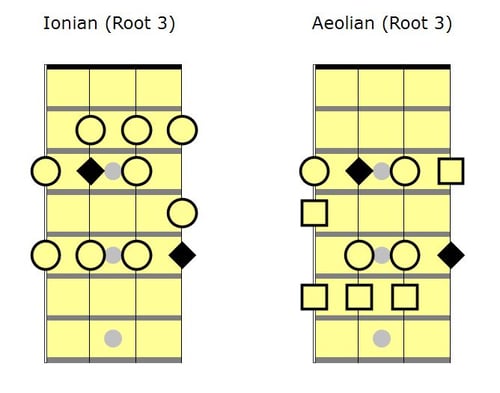 The method I laid out should work for any key in the circle of fifths, but assumes the song you're playing over is composed primarily of major chords and minor chords. If you tend to lean on your ear for your riffs like I do, this can be a good fallback technique to help extract a bassline from a jam session or for when nobody bothers to tell you anything about the song they want to try.

The ability to improvise basslines will make you a desirable band member and songwriting collaborator. Keep these simple tips in mind the next time you're hammering out a song with your band, but don't expect to get any thanks for using them. If worse comes to worst, remember what Victor Wooten says: Most of the time, your chances of guessing a correct note are around 58%, and you're only a half step away from a note in the scale.

Matthew Wendler is a blogger and multi-instrumentalist from New Jersey. He specializes in guitar, bass guitar, and bagpipes, and is passionate about writing both professionally and for enjoyment. His personal blog can be followed on Twitter @ymiatvmi.