How to Create Dreamier Guitar Chords 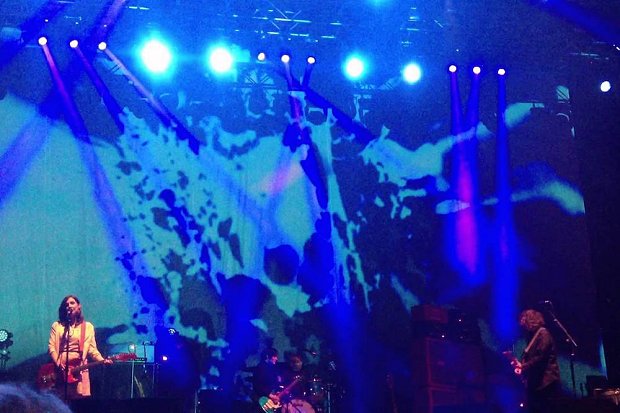 Are you planning to write a romantic love song for a special person in your life, or in love with genres like dream pop, psychedelic rock, or shoegazer music? Or are you simply getting bored of writing songs with those typical, standard-tuning barre chords on the guitar? Then here are some useful tools for you.

If you’re like me, you’ve spent thousands of dollars on both records and effects pedals in search of what it is that makes a perfect shoegaze guitar tune, well, perfect. It's been my project for a little while now to try to map those dreamy, romantic chords on the guitar and teach people to play them. No delay, no reverb, no other effects needed, just a guitar and a tuner! Here are a few super easy chords that will bring that heavenly, open-air feeling into your bedroom.

Standard tuning defines the string pitches as E, A, D, G, B, and E (starting from the low E to the high E). If you don't feel ready to use "foreign" tunings yet, standard tuning still works perfectly to play some dreamy chords.

But first, what makes a chord sound dreamy?

To start, I like to try to add sevenths to my major chords and play around with those. A major seventh is basically a chord that uses a major third and a major seventh (for reference, a major third is the relationship between the root and the second note of the chord, and the major seventh is the relationship between the root and the fourth note of the chord). This really helps to open up the chord so it doesn't feel so complete; instead, it feels like the foggy memory of a dream, one that you can't quite remember how it ended.

Here are a few major chords with added sevenths. A similar thing happens with major 9th and 13th chords. 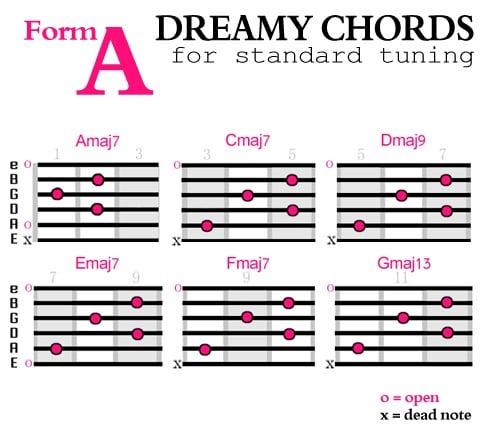 If you play these chords in succession, it's a pretty easy example of a dreamy major seventh chord pattern you can use all over your guitar neck, and you don't need to switch the fingering too much. We'll call it "Form A" because it's a mix between a power and an Amaj7 chord pattern. The first two fingers (the pointer and the ring finger) fret a power chord from the A string on. Make sure that you always mute the low E string and leave the high E string open. You can use this pattern in six different fret positions, and in all these positions, "Form A" sounds full, harmonic, and dreamy.

Now, as you move up the fretboard, add your pointer finger onto the E string one fret behind the D and G strings, your pinky goes on the A string with your middle and ring fingers dropping onto the D and G strings. To add more shiny brilliance to your guitar sound, leave the last two strings (B, E) in every fret position open.

When you progress through the "Form E" chord positions now, it sounds like every chord flows into the other seamlessly. 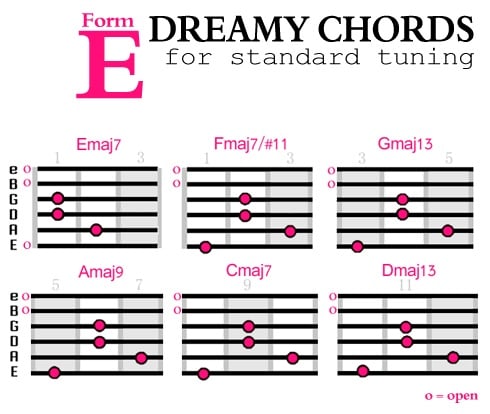 These are just two easy examples. Try to figure out some more and get creative! That's fun!

Lastly, I want to present one of my favorite open tunings along with another simple chord pattern which is also adaptable over your whole neck. I haven't found a name for this tuning and finger pattern on the internet or elsewhere, so I named it myself! Let's call it "Open Dream Chords," because it's a bit like an open D tuning combined with an emotive finger pattern that sounds very, very beautiful. Everyone should try this.

See below for the fingerings of each chord. As you move up the fretboard, lay your pointer down on the top two strings. Now add the ring and pinky fingers two fret positions further on the D and G strings and strum all six strings together. Choose any fret position and experiment with what sounds cool together. You can hear chords unlike any chord in the standard tuning. These chords sound fuller, more romantic, and almost epicly dreamy. 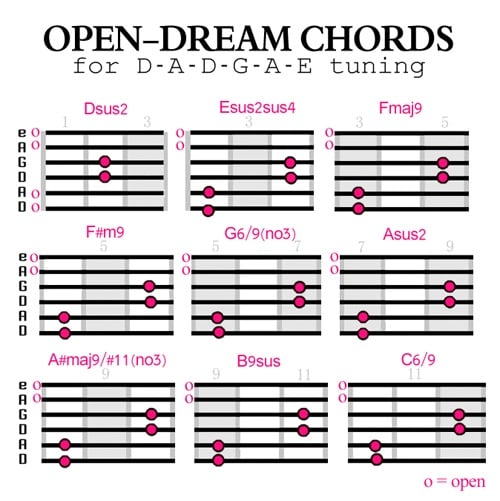 These examples are just a tiny fraction of the possibilities a guitar has to create a dreamy atmosphere like shoegazing pioneers My Bloody Valentine or Slowdive. You've got the tools now, congrats! I really hope that you're going to experiment with them, refine them, and create some beautiful-sounding, shoegaze guitar music of your own!

Kenneth Estrada y Santiago is a songwriter, musician, and design artist, based in Berlin, Germany. He currently sings and plays bass in his band Downhill Willows, is CEO of the Berlin indie production company Pitchbox, and writes for the Berlin Shoegazer blog. Keep up with the latest from Kenneth on Facebook and SoundCloud.