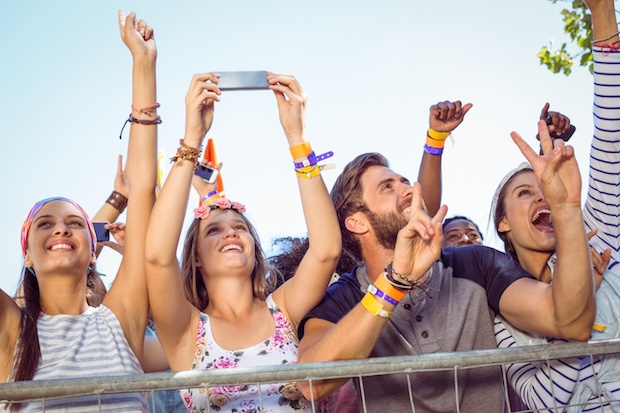 While the term "fan" may be a bit vague at times, "superfan" is not. Superfans might not be as plentiful as those who simply like some of your music, but they're worth their weight in gold. They're the ones who don’t hesitate to spend a month’s rent for a VIP experience or purchase every T-shirt in your online store. Last year, Nielsen concluded that while only 14 percent of fans in the music industry are "superfans" of an artist, they're responsible for 34 percent of music-related purchases.

In addition to spending their own hard-earned money, superfans are also your greatest advertisers. They'll promote you harder than your record label, telling all their friends whenever you have a new song and dragging them to shows. Even though a bit outdated anyway, street teams have been digitally replaced by superfans.

But, how do you make someone who doesn’t know you a fan – and the crucial part – turn that fan into a superfan? There’s no exact science, but here are a few tips that can help.

1. Make a name for your fans

Katy Perry has her Katy Kats. Lady Gaga has her Little Monsters. One Direction has their insane Directioners. Sure, all of these are extreme examples on the massively successful end of the scale, but they're some of the best examples as well. These three groups are some of the most diehard fans out there, and they've made their favorite artists both rich and famous.

Coming up with a name for your fans may sound silly and a bit juvenile, but it works. The idea has been around for a while – plenty of people named their fan clubs or street teams back in the day – and the digital version isn’t too different. Once you have a name, you can even create a special hashtag or persona around it. Lady Gaga often tags posts to her fans as #PawsUp or #LittleMonsters, and much of what Katy Perry does is cat-themed, tying it all together.

Even Billboard magazine recently held an online contest to see whose legions of superfans were the most dedicated, bringing press to not only the artists, but their groups of fans. If Billboard says it’s so, it might be time to take it seriously.

2. Make an effort to interact

Interaction is the number one way to turn someone who enjoys your music into a superfan in no time. It can also come in many forms, and there's no limit to how much you can do.

Saying hello to fans after a show can be a bit exhausting, but is, unsurprisingly, incredibly important. Many of these people are already huge fans of yours (they did come to a show, after all), but some may not be quite there yet. Chatting for a minute or two with many of the people who paid to see you is a genuine way to show you’re thankful, as well as to introduce them to who you really are as a person or group. Never skip out early after your performance, as you risk not only losing an opportunity to create more fans, but angering those who already love you.

Interaction can also be as simple as replying to people on Twitter, retweeting them, or favoriting what they’ve said. If you are seen as an accessible, real person, there’s a greater chance people are going to fall in love with you. On top of that, getting the attention of a band or a singer you really like is a good feeling, superfan or not. You really can’t go wrong here.

It doesn’t matter who you are – from the biggest superstar on the planet to a local band just getting started – the only people who keep you going are your fans. While you may create the music that brings you two together, if you didn’t have them, you’d be nowhere. Without people to appreciate and consume what you’re making, you are nothing.

Keep this in mind above all else, and everything becomes easier. Remembering how much you owe every attendee at a show or each fan who purchased a song or album will give you the energy to keep responding to them online, to stick around after a show, or to put up with the inevitable craziness that’s sure to arise with some of them.

Just as a store would say that the customer is always right, remember that in one way or another, you owe everything to your fans – and the minute you forget that, it could all go away.