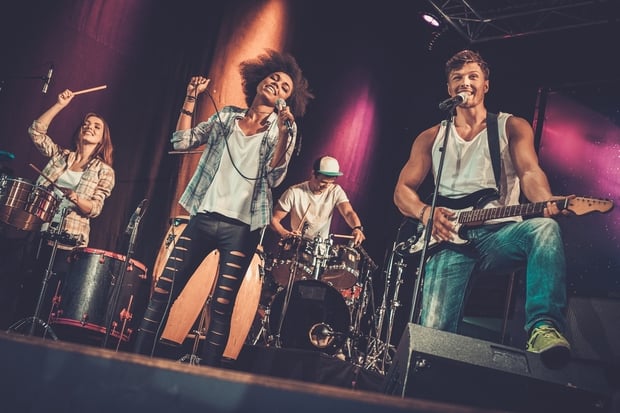 When you’re a musician, there’s a lot you need to worry about. Staying relevant on social media, booking shows, giving it your all onstage, finding ways to make a few extra bucks so you can pay the bills, and then actually creating music (of course). Now, I don’t want to add anything to your already-full plate, but there’s one more thing you should consider: becoming a company.

There are a lot of reasons why you should create an LLC (a limited liability corporation) that are essentially just related to your musical endeavors, and though this might be the first you’re hearing of such a thing, hear me out.

1. It's easier than you think

Many musicians get nervous the minute business is brought up, and I understand that hesitation. If it isn’t your specialty, delving into something like “forming a company” can be intimidating. It sounds like it will be a complicated, treacherous process, but don’t let this misconception scare you from actually doing this for yourself!

There are really only a few steps involved in officially creating a company in a legal sense, and you can read more about that here. Think about it – there are currently hundreds of thousands of LLCs in this country, and there have been millions in the past. With that many companies, it’s not probable that the government would make it incredibly difficult to create one.

The music industry, and musicians in general, aren’t known for being the most professional bunch, even though this is a business. The smartest and the best artists out there know how to be both a fun, crazy performer on stage, and a boss in the boardroom (which is just a saying – you probably don’t have to actually sit in a boardroom anytime soon).

“Looking professional” isn’t about wearing suits and having a proper resume – it’s about showing people that they need to respect you and treat you as somebody who is making a living. If anybody approaches you as a solo artist with a business proposition, it might look very different than if they approach you as a company. It starts the conversation from a very different place, and that should be to your benefit. Don’t underestimate making a professional first impression, especially if the deal you’re looking at could end up being lucrative.

Operating as an LLC offers certain legal protections, and that’s something you’ll need to think about, even if you don’t want to. Hopefully you never have to worry about this, and many musicians don’t, but it never hurts to be prepared.

Being an LLC is sort of like having insurance – it’s the thing you never need until you really need it. If someone were to sue you, the resulting lawsuit could ruin you as a person for a very long time, but it’s different when they have to sue an LLC. Companies are only responsible for so much, and even if you lose in court, it probably won’t follow you around forever. It seems silly, but that's the way the law works. (Why do you think big companies get away with so much?)

Taxes are difficult as a musician, because they can be pretty complicated when you’re self-employed and when you have money coming in from many different places. Between record and single sales, streaming revenues, concert tickets, merch sales, and so on, you may have a hard enough time tracking down where your cash came from, and that’s supposed to be the easy part of taxes. Oh, and we're talking about taxes, and taxes pretty much suck no matter what.

When you’re an LLC, there are a lot of different things you can write off on your taxes, and that benefits you quite a bit. The basic rule is the more you can write off, the better you’ll be after tax season is through. Everything from the costs to “get started” as a company (which can be loosely interpreted into things like instruments and recording equipment, potentially) to travel expenses and even the “location” of your business, which I’m willing to bet is just your apartment. These are all things that you will likely get to write off your taxes, whereas the same can’t be said if you were filing taxes as any regular old person. This is one of the biggest benefits of being an LLC, and it’s easy to see why.