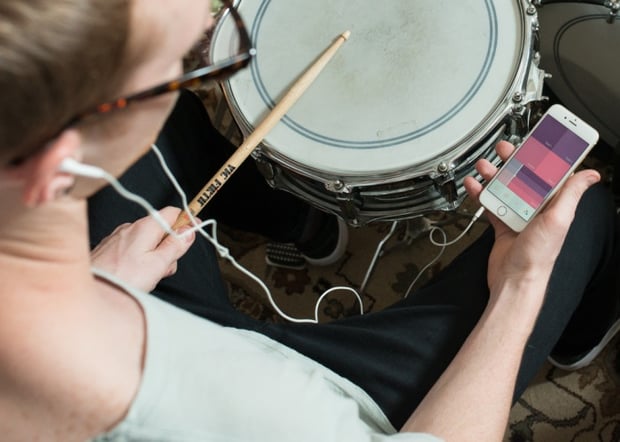 My first real passion is drums. I started playing when I was four years old and studied pretty hard through college. I was lucky enough to have some incredible mentors and teachers along the way, including guys like Mike Shapiro (Sergio Mendes, Macy Gray, Justin Timberlake), Ralph Humphry (Frank Zappa, George Duke), and Craig Thatcher (October Project, Christopher Cross). But of all the lessons and ideas I picked up, I've deduced that the single most important thing, as a rhythm player, is being able to confidently play while under pressure. With that, I'd like to tell you about the infamous "RLS."

"RLS" (not to be confused with Restless Leg Syndrome), stands for "Red Light Syndrome," and is defined accurately by Urban Dictionary as, "Where a person has musical talent, but once they are being recorded, they fall to pieces. Symptoms of Red Light Syndrome include pale skin, cold sweats and frequent mistakes."

"It took three takes on drums for him to get that, and even on the third time, he didn’t get it. I'm thinking he has Red Light Syndrome…"

It's that little red flashing light that goes on when you're in the studio and the producer hits record. You’ve practiced your whole life for this moment; you've got this. You shred your instrument, but then, all of a sudden, when the red light goes on, you’ve suddenly forgotten what a drumstick is. It happens to us all at some point. Something about the idea that whatever you play is under the microscope, every screw-up, every imperfection, all there to haunt you for the rest of eternity. The biggest bummer of all is there’s absolutely no way to practice for this situation other than actually being recorded! That is to say, the only way to practice not sucking while being recorded is to actually suck while being recorded – inevitably pissing off your bandmates, and producer, and manager, not to mention your parents who spent all that cash on drum lessons. It can be a painful rite of passage as a musician.

A few weeks ago, I was tracking a little drum idea and realized that you can totally strengthen that "Red Light muscle" by using the app Trackd to practice. At the end of the day, it's about building a strong, healthy relationship with the metronome – making sure every note you play lands exactly where you want it to, while being able to do so under the immense pressure of the red light.

Here's a few ideas to play with, so when you’re at a real session, you don’t bite the dust. I’ve put them in the context of being a drummer, but the truth is they apply to all instruments. As James Brown would wisely remind us, "Every instrument is a drum."

Turn the click on, and play directly with the beats of the click – so one-to-one tapping with each note of the metronome. Then, with the click still on, play it back and listen for notes that are offset from the click. You'll probably hear a few that are ahead or behind the click. Start noting how long you can go without any offset notes. See if you can build up to a few minutes of perfectly dead-on notes with the click. This is gonna be harder than you might think, so don't get bummed if you practice this for a week straight and still hear all kinds of notes rushing or dragging. Good things take time.

A lot of people fight the click while recording. Violently stomping your foot "in time" as if that will somehow connect you with the time better is the opposite of what you want to do. This just creates friction between you and the click. The best thing to do (and what I mean by "making friends with the click") is to just listen to it. Use your ears while you're recording. Did you know that it's impossible to listen while you're talking? Think about that for a second. Stomping your foot is kinda like talking over the click, so when you allow yourself to actually just relax and listen, you'll be on your way to a very fruitful, almost sensual relationship with that little robotic chirp sound.

Throw on the click and record a kick-drum pattern (or just pound on a table if you're not next to a kit). Only focus on the kick sound for track one. Then on track two, record a snare pattern (or snap, clap, tap, you get it). Next up on track three, put down another layer of some kind. Get creative. You might make something worth keeping!

At first, really try to lock with the sound of the click instead of the other sounds you've recorded. If you want, you can even go to the mixer and drop the volume of the previously recorded sounds so you can really only hear the click. Then, when you’re finished with all eight tracks, turn the volumes of each voice back up and listen to what you've created. If it hurts your ears, which it probably will at first, you've probably got some notes in there that aren’t completely locked in with the click. Keep trying this with all eight tracks until you get something that's undeniably danceable. Rinse and repeat at a bunch of different tempos.

These concepts are gonna be harder to get down than you might imagine. It's stuff that the pros spend a lifetime practicing, so be patient, cut yourself some slack, but stay at it! That said, if you still don't sound good after 10,000 hours, it might be time find a new hobby.

Most musicians practice with a metronome, but if you use Trackd, you're actually recording yourself while practicing! This subconsciously is building up a strong resistance to our old friend RLS and ensuring that when it comes time to throw down in a real studio, you're gonna feel right at home.

Unless you own a laptop, DAW software (like Logic or Ableton), a set of mics, cables, preamps, and an audio interface, Trackd is the easiest way to gain practice time with the Red Light. If you end up making something cool, invite me to collab on it! Find me on Trackd @aaronrays. I’m always down to listen to what you’re creating!

Aaron Ray is a musician and app king with over 50 million downloads to his name. He’s been a drummer since day one and is pretty good on the keys, too. He is a co-founder of Trackd, a multi-track recording platform for iOS that allows users to record music, then collaborate and share with musicians across the world. At Trackd, Aaron keeps the dev flowing and holds the (current) record for most collaborations in the app.