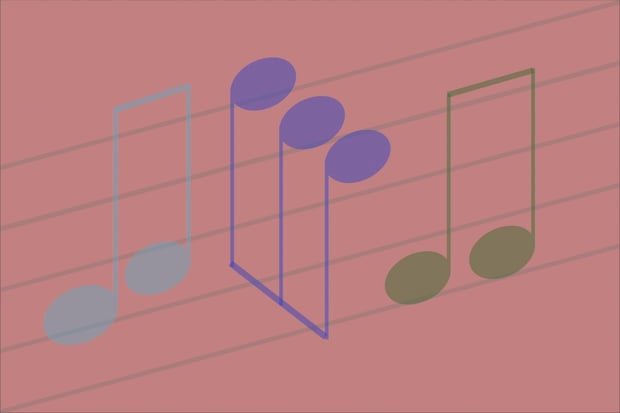 Introducing irregular time signatures into your compositional practice can be a liberating experience. Like anything else in music, nothing is hard and fast here, and there’s certainly a bit of magic involved, but here are a few tips to help you start experimenting.

First off, figure out what exactly you intend to accomplish. If you want to do some odd meter composing just to do it, great. Experiment like crazy. If you want to craft some sort of musical, mathematical riddle, I’m all for it and please send me links when you’re done because I love that sort of thing. But if you want to create something an audience will still groove to, the remaining points are things you should take into consideration.

While standard time signatures can be broken down into very symmetrical subdivisions, irregular meters often allow for several asymmetrical options. Consider the time signature 6/8. We subdivide it into two even sets of three eighth notes, or two dotted quarter notes. 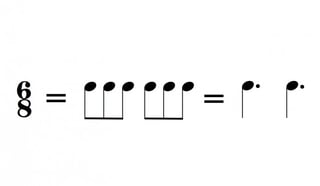 Now think about 7/8. We’ve only added one beat to the measure, but suddenly we’re faced with a few possible subdivisions. 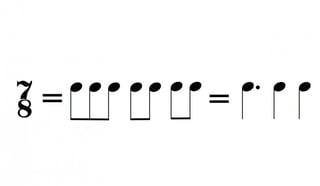 We could put that dotted quarter in the middle (giving us “one-two, one-two-three, one-two”): 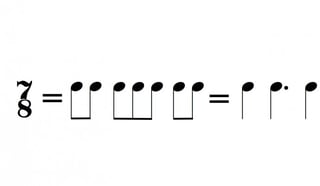 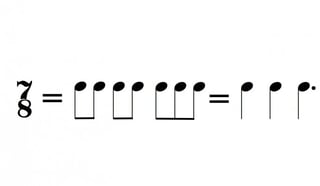 One of the simplest ways to make an audience feel at home in an irregular time signature is to really emphasize beat one. One way you can do this is by keeping sustained notes at the front of the bar, while adding a bit of motion at the end, like this: 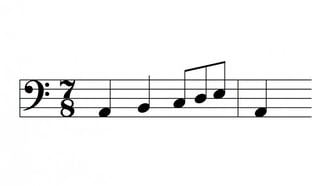 The three notes at the end of the bar sort of drop us into beat one of the next bar. They create a small sense of anticipation, making the next downbeat feel like a landing place.

You can also emphasize strong beats harmonically, by starting measures with a tonic chord.

Like in most grooves, the bass line plays a key role here. Notice how it’s essentially outlining our tonic chord, Bmin7, always landing on the root on beat one. Speaking of outlining chords…

I have friends from music school who prefer music riddled with modal interchange, chromatic melodies, and shifting time signatures. Whether consciously or subconsciously, many of them treat music like a puzzle and prefer elaborate compositions because they have the tools to make sense of them. Their ears are acclimated to this sort of thing.

However, as of late, I’ve been listening to more mainstream music, so when it comes to all those complexities, my ears are a little out of practice. If there are too many compositional surprises in a piece, my brain goes into overdrive while I listen. If I’m feeling lazy or tired, I start to tune it out, and I have found that many people share that sentiment.

To avoid writing something that sounds overly complicated, focus on one cool thing at a time. If that goes well and the piece calls for more, make alterations.

For instance, let’s assume the one cool thing is that we’re writing a piece in 11/8. Great. If we don’t want our listeners to feel overworked, we may want to start with a melody that’s a bit stagnant or full of space. Perhaps we start with a really simple, two-chord, diatonic progression. Then, if what we have feels too simple, we can always go back and alter the melody and consider some reharmonization.

Take another look at "Money." Because we’re lingering on that Bmin7, we don’t have to work to keep up with the harmony. Even though 7/4 is a fairly unfamiliar time signature, the song is easy to groove to because there’s no musical clutter (also because Pink Floyd is amazing and this is one of the greatest songs ever written).

Experimenting with irregular time signatures is a great way to shake up your personal writing style and stretch your compositional muscles. Listen to examples until irregular meters start to feel natural to you, and you’ll likely come up with some cool grooves without having to put so much thought into it. We’d love to check out some of your favorite examples of atypical time, so please add them to the comments!

Mahea Lee is a classically trained pianist and composer who has a degree from a jazz school and leads an electro-pop band. Her greatest musical passion is lyrical songwriting, but she's been known to write the occasional fugue. She graduated from Berklee College of Music, where she majored in contemporary writing and production and minored in music theory. For more Mahea, check out Soundfly's course, The Improviser's Toolkit.