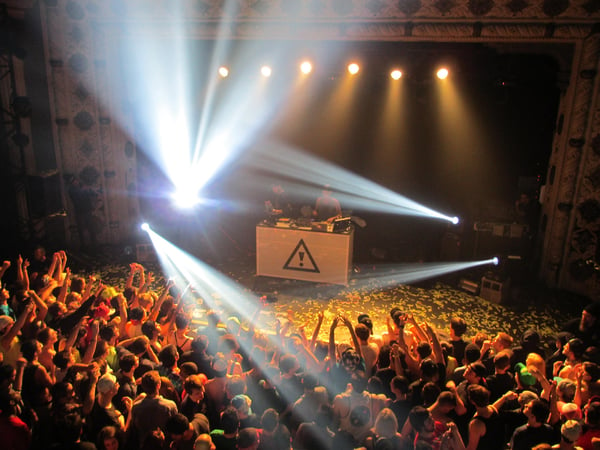 Chicago duo Flosstradamus plays to a packed crowd at the Metro in 2012. (Image via Flickr / CC BY 2.0)

In the chronicles of Chicago music, there's a steadfast commonality: this city has never shied from creating opportunities for burgeoning artists and bands. Dating back to its legendary blues history, into the '90s alt-rock movement, and now, as independent music has become incredibly inventive and surprising, Chicago has always thrived on the excitement of something new.

Yet, at the same time, the old is very much preserved and beloved. Many of the venues on this list are historically significant, running for more than 20 years and going strong. They don't simply run on the fumes of nostalgia, though. These clubs continue to be champions for fresh creativity and spearheading sounds.

Balancing a fondness for their amazing pasts while empowering the future of music isn't as easy as you'd think. And to be a newer club among the city's music stalwarts can't be easy, either. It certainly helps that the music fans of Chicago are so devoted, so on board with supporting up-and-coming bands and artists, both local and those touring through.

When Pitchfork writer Jason Diamond dubbed the Empty Bottle the last great indie rock dive bar standing, he didn't just mean within Chicago. Of all the storied venues in the US, the Empty Bottle truly does stand as one of the great. Since the '90s, the club has hosted early career shows for now-famous bands like Wilco, LCD Soundsystem, the White Stripes, the Yeah Yeah Yeahs, and Veruca Salt.

Forever a pretense-free spot, the Empty Bottle's overarching mantra, “New Music First,” remains a cornerstone of the show calendar, which is chock-full of incredible groups and artists of all genres, whether already hyped or soon to be.

Reliably great lineups in its 400-capacity room as well as in its compact Music Joint space, a record store on the second floor, and a rooftop deck with pool and other games, what more could you want from a venue? There's grub and booze too, of course.

Reggie's opened in 2007 with just the smaller room, then added the bigger space, which features a sloped floor for ideal stage-gazing from any angle, a few years later. Now, they've got pretty much all the party bases covered, and their varied calendar, which can include anything from country to jazz to prog-rock to hip-hop, widens the appeal of Reggie's even further.

Another touchstone of Chicago's indie-rock history is the Metro which, during the '80s, booked groups like the Ramones, Sonic Youth, The Bangles, Billy Idol, New Order, and Depeche Mode. In the grunge and alt-rock era that followed, Liz Phair, Veruca Salt, Nirvana, and Soundgarden played there.

The basement space below the Metro is Smart Bar, and it holds its fair share of music history trophies, too. With DJs like Frankie Knuckles and Joe Smooth regularly holding court in the '80s, it was considered the epicenter for the city's pioneering house scene. Revered industrial originators Ministry also honed their chops there.

The founder of this power couple of clubs, Joe Shanahan, began his foray into nightlife by throwing “fringe gatherings” at his loft in an effort to uplift the Chicago arts and culture. When attendance grew too large, he took over what was then a jazz and folk club, built in 1927 and formerly a Swedish community center.

The Metro's first-ever show was headlined by R.E.M., then a fledgling act; after the show, Shanahan used the little money that was leftover to treat the staff to a pizza. With an upbringing so genuine and full of ambition, it's no surprise the Metro (and Smart Bar) grew to be one of Chicago's most important and cherished elder venues.

Its capacity is on the cozier side – only about 300 folks fit inside – and that makes Beat Kitchen, open since '94, an ideal environment in which local bands can really engage with fans during sets. You'd think that number would mean mostly smaller-scale acts take the stage there, but in fact, lots of fast-emerging, buzzed-about acts as well as established, long-beloved groups touring through Chicago pack this spot to the gills on a regular basis.

Plus, a lot of the events are all ages, so the city's younger crop gets to hang, too.

June of 1994 is when Double Door opened in Wicker Park; in the same week, the Smashing Pumpkins' side project Star Children took the stage. Three years later, the Rolling Stones played a secret show. Co-owned by Sean Mulroney and the Metro's Joe Shanahan, Double Door is another spot among a special few that are like royalty of Chicago's rock 'n' roll history from the '90s onward. Deservingly, it's featured in the movie High Fidelity.

This landmark club, though, is the only one of them facing threats to its future. The Chicago Tribune recently reported that, after months of legal back-and-forth, a judge ruled Double Door must “eventually evacuate the Wicker Park space,” due to a failure to notify the property's landlord of lease renewal. It's not the first time issues between the club co-owners and landlord have come to a head, either. Their 2005 dispute was similar – and Double Door prevailed. Here's to hoping they can do it again.