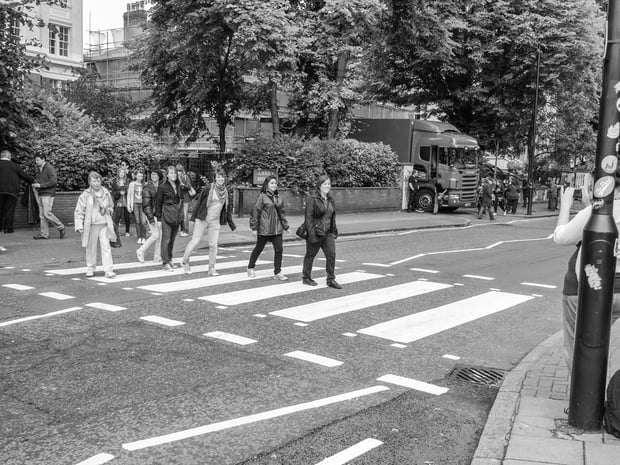 Few bands command as much respect and as much controversy as the Beatles. Whether it’s influencing the sound and style of rock 'n' roll, the fashion industry, songwriting, or just plain being a celebrity, there's little the Beatles haven't done to influence the pop music world.

That can make it difficult to remember all the interesting things the lads from Liverpool pulled off in their short time together. And with so many accomplishments across a broad spectrum of pursuits, many of the most popular stories are the ones that continue to be repeated. But what about some of their lesser known achievements? With a band as complex as the Beatles, their subtlest moments have become some of their most powerful. These five forgotten ways the Beatles changed pop music are, in retrospect, maybe just as important as their obvious achievements.

While country and western music was always popular in America, its influence in England didn't become as great until the 1950s. Sailors began importing records from America to the country, copies of which wound up in the hands of the young Beatles, greatly influencing their musical tastes. Hank Williams, the Everly Brothers, and Elvis would influence the Beatles to sing and play guitar at the same time. The Beatles' early material, especially, would feature many hallmarks of country music: large guitar chords in the standard position, alternating bass note rhythms, harmony singing, simple yet dramatic chord progressions, and plenty of acoustic guitars. Some songs more than others were especially country influenced, and Ringo Starr’s rare lead vocal parts would inevitably be on country-tinged songs and covers like Buck Owen’s "Act Naturally."

2. Adding "the" to a noun to create a band name

Truly, the Beatles' most universal influence on pop music might be the inclusion of the word "the" before a noun for constructing a band name. The convention has become almost a parody of itself, with bands having picked everything from nonsensical words to action verbs to construct band names in this method. While they weren’t the first band to construct their name this way, they made this naming convention nearly inextricable from the experience of starting a band.

Now a popular expression of creativity among musicians, the Beatles were one of the first to popularize the idea that musicians could be professionally adept at multiple instruments. While there have always been multi-instrumentalists, in the pop music realm most musicians stuck to one instrument or just sang.

The Beatles, while largely sticking to their respective instruments, could switch between guitars, bass, piano, drums, and singing, and did so while playing live or in the studio. The debates between who played what on their later studio albums are always hot, with most of the switching of instruments going uncredited. The fact that they did so at all would speak loudly to aspiring musicians, who, after the Beatles, were less likely to focus on playing just one instrument on recordings or live.

While the Beatles no doubt ushered in the heyday of hippiedom with their landmark album, Sgt. Pepper's Lonely Hearts Club Band, they just as quickly ushered it out. After visiting the epicenter of the hippie movement in San Francisco during the pivotal "Summer of Love," lead guitarist George Harrison became disenfranchised with the whole scene.

After seeing how it was largely a cover for drug abuse and cultish behavior, Harrison sought to distance himself and his band from the scene. According to interviews, Harrison spoke with his bandmates about it, and their decision to retreat to India to study with the Maharishi Yogi while writing tracks for what would become the White Album was largely influenced by this rejection of the hippie ideals. Instead of dense, swirling psychedelic productions like their last two sets of recordings, the White Album would largely feature country-inspired songs played on traditional instruments and hard-rocking guitar tracks.

Before the Beatles, there weren't so much rock groups as there were individual performers who were backed by other individual musicians. As a group, the Beatles created a sound that was ingrained with their identity as four unique individuals who would operate under one vision. Their breakup sent shockwaves through the world, as a band had barely existed like them, let alone willingly disbanded in public.

The fact that they would each remain professional musicians operating under their own names and starting their solo careers, was new for pop music, and has since become a standard trope in its mythology. Before the Beatles, bands didn’t break up, and their members didn’t go on to start highly speculated and followed solo careers. This influence would shape the way bands are perceived and the way solo artists would be treated up to this very day.

Christopher DeArcangelis is an active musician and copywriter from Chicago. He writes songs, plays guitar, and sings vocals for the rock and roll band MAMA, and is the founder of the creative agency Static Free Industries.