The 5 Most Livable Cities to Build a Music Career 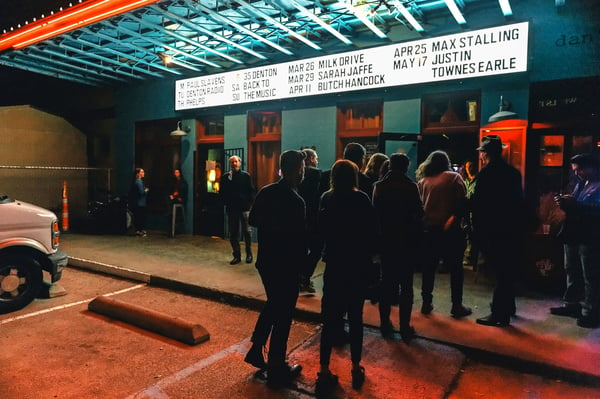 Denton, Texas. (Photo by Jonathan Silverberg via Flickr / CC BY 2.0)

What makes a city especially friendly to independent musicians looking to advance their careers? The obvious spots, like New York City or Los Angeles, aren't the easiest places make any sort of dent. Not only are they overwhelmed with folks with the same aims but also they're quite pricey, and when you're struggling to make ends meet financially, you'll ultimately lose time and energy that could be spent building your career.

The ideal cities for DIY musicians boast a balance of low-cost living and openness to independent music. Cheaper rent, a sense of community, fans and venues with a penchant for championing the underdogs – all of these things are important.

The five places we've picked offer all of that and then some. You can make music anywhere in the world, but in these environments, you'll likely have more time to focus on music making and a more supportive network to receive the art that materializes.

Sun, Stax, and Volt Records undoubtedly earned the city its reputation as a powerhouse during the pioneering years of rock and soul, but Memphis' rich music history reaches even further than that – Beale Street's legacy as a blues and jazz hub actually dates back to the early 1900s. Few American cities rival its iconic status, and these days, not many can compete with its appeal for up-and-coming musicians, either.

Memphis continues to contribute incredible additions to rock 'n' roll today, thanks in particular to Goner Records, a garage and punk staple founded in 1993 and perpetually growing in prowess with its still-thriving storefront, incredible roster of label alumni, and annual blowout festival.

Hip-hop saw a boom in Memphis in the '90s, and is mid-resurgence now with established acts like Yo Gotti, who hails from the northern side of town, at the genre's current forefront. Couple that fertile creative landscape with average rent prices falling between $700 and $800 for single bedrooms – about 14 percent lower than the national average – and you've got prime conditions for up-and-coming artists who'd rather focus on their music making than concerns about high costs of living.

If all you know of NOLA is Mardi Gras, then you're truly missing out – on a lot of things, obviously. But in this context especially you're overlooking epic opportunities for musicians. Even beyond being the birthplace of jazz (which is amazing, of course), New Orleans' music scene today has a strikingly tight DIY scene.

Clubs like Siberia, One Eyed Jacks, and the Circle Bar maintain steady programming of local independent sounds of all styles, and resources like NOLADIY.org are a boon to centralizing an up-to-date listing of both the goings-on and the promoters and bookings agents to contact to get your own band onboard.

For musicians looking to plants roots, grow their sound and hone their craft, the strength of its DIY community is truly one of New Orleans' biggest assets.

Parquet Courts, Neon Indian, and the Polyphonic Spree all count Denton, just three hours from Austin, as their music-making stomping grounds. Like a result of its new-found reputation as an indie-rock hub and its vicinity to the annual sonic smorgasborg that is SXSW, Denton is now the site of a three-day festival of local and national acts strategically held the week before the Austin avalanche.

Founded as NX35 in 2009, then later named 35 Conferette and now dubbed 35 Denton, the festival has refined its mission and significantly expanded its reach in the past couple of years. In fact, it's rumored that the 2017 edition will take place in May instead of the usual March – reaffirming the increasingly clear truth that 35 Denton, and in turn, Denton itself, stands sturdy on its own as an independent music city.

Yes, it's a college town, and football is easily its best-known export. But Athens' contributions to music are also pretty stellar: the B-52's, R.E.M., Widespread Panic, Drive-By Truckers, Neutral Milk Hotel, and more. Let's not forget its exchange with Atlanta, either. It's only about an hour's drive away, making one-off shows for bands and artists from either city exceptionally easy to swing any night of the week.

While living in the state capitol its own set of perks, as a college town, Athens offers a drastically lower cost of living – and the opportunity to make a dent in Atlanta, too.

Another spot just outside a major city known for its music scene is Eugene, less than two hours from Portland by car. Maybe you haven't heard of it, but a quick gander at the culture section of Eugene Weekly will change your perspective entirely.

Independent art is booming there, period – and the DIY music scene is continually growing. From alt-country to punk to electronic, Eugene has plenty to offer, all of it propped up by supportive venues and avid music fans.