5 States With More Than 5 Awesome Cities to Tour Through 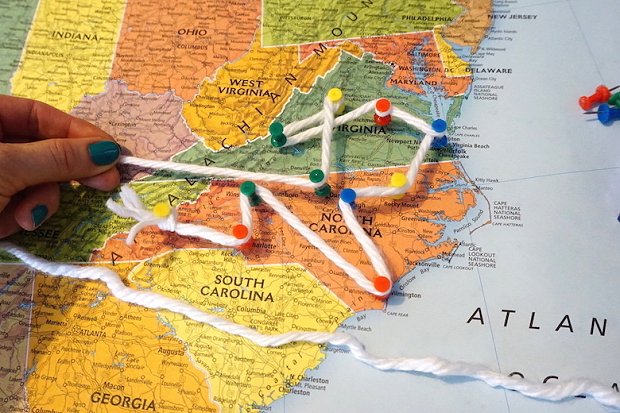 Smart touring means covering as many live markets as possible with the smallest amount of overhead. Being able to perform in cities a short distance away from each other saves your band transport costs, time, and energy. On major tours, small cities and college towns are often overlooked in states with big cultural epicenters, but for shoestring touring, these kinds of towns can be extremely valuable "anchor" gigs for your tour. Learn more about anchor cities in our video on plotting your tour.

If you can't convince your whole band to take a month off to go out on the road, or if you've never toured before, booking shorter tours around one particular area can be a great way to find new audiences, hone your sound, and practice being out on the road. Here are five states that boast five or more awesome cities to bounce around with your band! 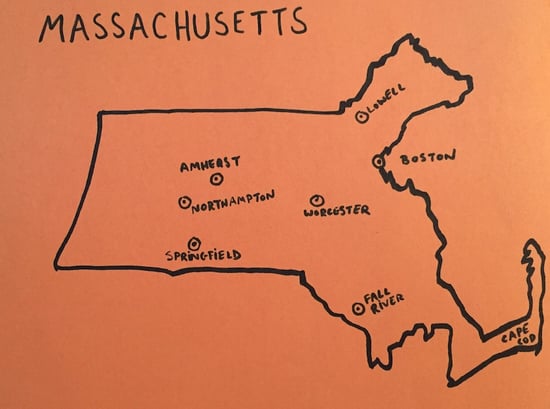 Perhaps this goes without saying, but the Cambridge/Boston area is probably the USA's most concentrated hub for incredible nightly live music. We're biased, since half of the Soundfly team has at some point called the Berklee College of Music home. But how can you argue with all the hullaballoo? It's true!

Everyone has their favorite spots to play or see bands live. Mine are the Middle East, the Lily Pad, Great Scott, the Lizard Lounge, and Paradise Rock Club. Of course, there's tons of underground stuff going on in Jamaica Plain and Allston as well.

Nonprofit arts centers like Flywheel Arts in Easthampton, Narrows Center for the Arts in Fall River, and Flying Object in Hadley make Massachusetts the most unique, community-minded arts state among the other 49.

Art galleries presenting live music are prevalent as well, like Gallery 119 in Lowell, and basically everything in Northampton. 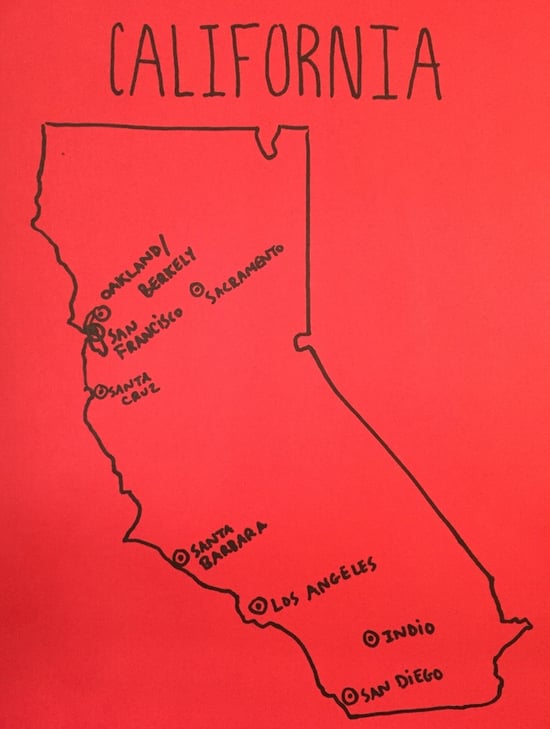 Obviously, LA and San Francisco help to make California an absolute treasure chest for boundary-pushing music of all sorts, but let's look at the rest of the state! Oakland is home to the historic Fox Theater, the New Parish, and the up-and-coming Oakland Music Festival, with more underground indie spots like Stork Club, 1-2-3-4 Go! Records, and the Au Lounge. For three of the best jazz rooms around, look no further than Yoshi’s and the Sound Room in Oakland and Kuumbwa in Santa Cruz.

Indio has become the epicenter of summer music festival culture of late, hosting Coachella, which brings acts as diverse as AC/DC and Z-trip, or Air and the Zutons, or… well, you get it. But the Palm Desert/Coachella Valley is also home to their own year-round blossoming channel of psychedelic desert rock.

Santa Barbara is very well-serviced by all-ages DIY venues, many of which can be found at the fabulous sbdiy.org. Talk about DIY though – Fresno is bursting with progressive promoters, it's almost too many!

And last but definitely not least, San Diego's string of serious live music spots include Soda Bar, the Casbah, and the Belly Up. All well worth wandering in any night of the week. 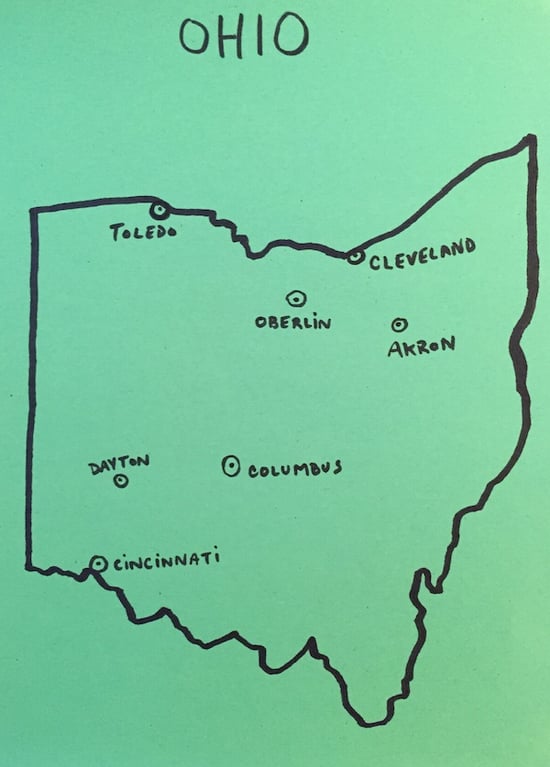 Okay, so maybe Cali and Mass were obvious candidates for awesome live music states, but Ohio is the reason this article needs to be written. Musicians touring from coast to coast could not be luckier to have this scenester oasis smack in the middle.

Columbus is perhaps the gem of Ohio with venues like Double Happiness, the Basement, Ace of Cups, and a bunch of awesome DIY promoters all helping to feed the fire of hardcore rock and loud music that burns here.

The strength of the DIY communities in places like Cleveland, Akron, and Bowling Green have been growing deeper and deeper now that young, industrious creatives are seeking out these towns' cheap rents to seek out a living. Art galleries in Toledo and Youngstown regularly host shows as well.

But in my experience, Cincinnati is where it's at! The Marburg Collective hosts great creative events, and venues like the Comet and Bogart's are classics. The mad-genius librarian Steve Kemple organizes the Experimental Music in the Library series at his local downtown branch. And Rock Paper Scissors is an intimate community-oriented art and music space. 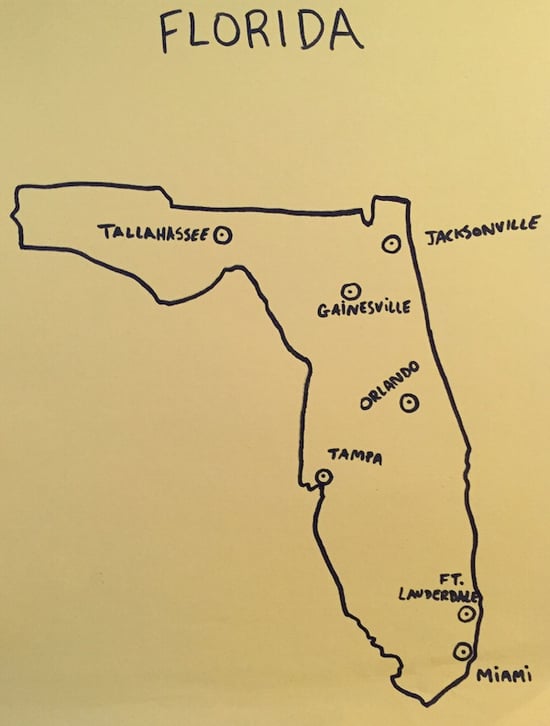 People don't typically praise Florida for its breadth of underground live music happenings, but that buck stops right here. In his article for VICE, Dante Lima goes into serious depth about all the amazing indie and punk scenes that are thriving under our very noses in Gainesville and Orlando, pointing to a very misunderstood, and frankly, uncategorizable culture of music and art. Find more about "Orlando Punk" here.

Miami has some great places to check out both local and international music, like Grand Central and the Garret, Churchill's Pub, and even some small gigs at Sweat Records.

Jacksonville's quadruple-headed monster of venues Jack Rabbits, the 1904, Burro Bar, and Underbelly always provide for an interesting night out!

Tampa and Tallahassee are not far behind, burgeoning music scenes always see a bevy of touring acts as well as tons of house shows all the time, at spots like Epic Problem, Two Devils After Dark, and the Goat House. And lastly, the Orpheum in Tampa also hosts some rad electronic, hip-hop, and alternative shows. 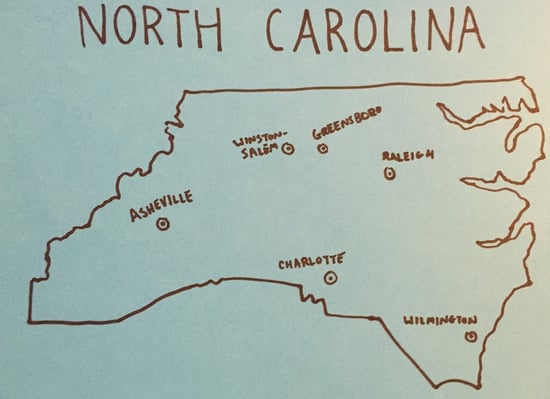 The Research Triangle of Raleigh, Durham, and Chapel Hill is a hot bed for local live music and a great place to bring your touring band through next time you're in the area! This circle of cities is one of the strongest clusters of college radio and live music spots you'll find anywhere in the country. Check out Triangle Rock for updates on shows happening in the area.

Then there's Asheville. Oh, Asheville. The hometown of the late Bob Moog and endless summer festivals as well as year-round awesome shows at the Orange Peel, Mothlight, Odditorium, and the Grey Eagle, Asheville is also home to some amazing experimental theater and opera! What?!

Other unmissable spots include Cat’s Cradle in Carrboro, 185 King Street in Brevard, the Double Door Inn in Charlotte, and Rusty Nail Saloon in Wilmington.

Get more touring tips than you can shake a stick at, and let us know what other amazing venues you've found clustered around the country in the comments below!

Jeremy Young is a music business guru and loves giving advice to young, emerging bands on how to make their tours more effective. He also plays guitar, publishes audiobooks, runs a record label, and is an artist working in sound media. He has performed and released material throughout Europe, Asia, the US, UK, and Canada, mostly with his trio Sontag Shogun.