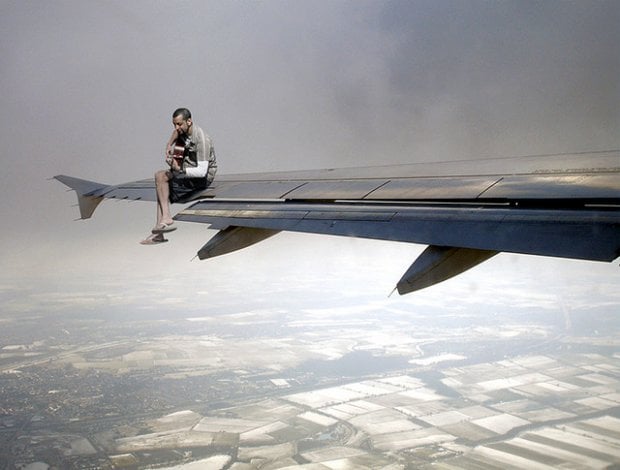 Don't get left out on the wing concerning the new rules for flying with a musical instrument. (Image via flickr.com)

Did you know the rules have changed concerning flying with musical instruments? Actually, there were no across-the-board rules before, just the whim of the airlines and their ever-changing policies. The US Dept. of Transportation changed all that in January when it announced the new rules that went into effect on March 6. Now, musicians finally have some federally mandated guidelines to go by when flying with an instrument.

You don't have to search far to find a musician who has a nightmare story about traveling with a beloved instrument. Even if you haven't experienced difficulties yourself, you probably know someone who has. Songs have even been written about the hassles of flying with a guitar. (Texas singer/songwriter James McMurtry's "Airline Agent" is one, and Dave Carroll's "United Breaks Guitars," a song he wrote after witnessing baggage handlers mishandling his $3,500 Taylor, went viral in 2009.) Most musicians avoid checking their instruments at all costs unless absolutely necessary. Now, the DOT ruling helps make the please-don't-make-me-check-my-instrument scenario more likely.

Here are the most important things to know about the new rules.

Many carriers already had most of these policies in place, but now it's a requirement for all airlines operating in the US to follow these rules. It's a good idea to peruse the six-page document yourself so that you're armed with information when you get to the airport, because the ruling actually states that "frontline customer service agents and flight crew may not always be well-versed" in policies regarding traveling with an instrument. Here's hoping all your flights are as hassle-free as possible. Happy flying!

Got the travel bug? These music festivals around the world are currently booking bands (all are either free or just $15 to apply!), and they're all providing travel stipends: