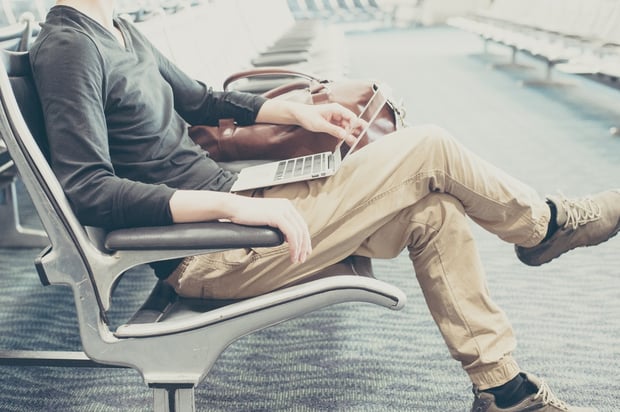 I don’t know about you, but my email drives me crazy. I have a hard enough time keeping up with the torrent of messages as it is, but when I'm traveling, it’s even worse. I've been moving around a lot the past year or two, visiting new cities and attending conferences and festivals, and whenever I do, I just can’t control my email as I normally would.

It upset me to an unhealthy level for quite some time, but I’m getting better at it. If you’re like me (in that it eats away at your soul and you desperately need some help when it comes to not letting email take over your life), here are some tips I’ve learned over the past few years that have lowered my stress levels considerably and helped me feel much better about the mess that is my inbox.

Before you even click an email, you should already have a good idea of whether it’s something you’re interested in or not. This isn’t always the case, but quite often, you’ll be able to decide without even skimming through a message, as bad as that sounds for the sender.

If you do wind up opening an email, do your absolute best to decide right then and there if this is something you’re interested in dedicating even a single second to. Sometimes a message can require a simple response; other times, the email may be the beginning of a long message chain, or perhaps it'll be something that will require you to do some actual work.

It can be difficult to choose what's important enough to agree to while you’re traveling and what isn’t. This is when it’s especially helpful to have someone working with you in a managerial context. A manager can typically take a lot of this off your plate or answer or deflect for you.

[6 Things a Band Manager Does (Or Should Do) for You]

If you’re doing this all on your own, quick thinking is great, but it takes practice. When I first began traveling a lot for work, it took me a long time to be able to pass on opportunities that I otherwise might be interested in, but which I couldn’t make work because of a full schedule. It’s even tougher as a musician, as the offers don’t pour in as frequently for some as they do for others.

Be strategic with your time, but keep in mind that if you go back and forth on deciding whether you should answer or ignore an email, you’re wasting the very little time you have, and you have nothing to show for it in the end but a possibly answered message.

While you’re looking through your email, don’t be afraid to go above and beyond when it comes to ignoring, deleting, or saying no. You shouldn’t always be so quick to decide, but when you’re on tour, there simply is no time or effort that can be spared on things that aren't essential.

The messages that you’ll miss out on may sound slightly interesting, or you’d be more inclined to respond in better form if you were at home working, but be ruthless while you’re on the road. Any offers to work with other artists, or perhaps to play other shows while you're on tour, should be met with an immediate, but polite, no.

There’s no shame in saying you’re traveling and don’t have time, but the person on the other end of the email deserves at least that... usually. If the message is any kind of spam, or even something that doesn’t exactly pertain to you, ignore it entirely. You have more important things to be spending your time on!

Creating labels in my Gmail has been a lifesaver for me, and though I don’t use them for everything, they’ve made burning through my emails when I travel that much easier. I personally label certain messages as ones relating to travel (flight info, etc.), ones that have tickets in them (for concerts, festivals, and so on), messages that are particularly timely, and so on.

I used to do my best to save all that travel or ticketing info elsewhere as a way of keeping track of things, but by simply categorizing my email, I can add a label and move on, knowing that I’ll be able to find what I need when I need to.

You can use this feature to your advantage as well, and it’s something that's helpful all the time. When you’re touring and have little time to go through what's sure to be a mountain of messages, you can prioritize emails by labeling those that can wait until you get home, such as missives from fans or requests for further into the future. This helps you tackle what really needs to be taken care of immediately, and it sets you up to get everything else done when you have the time.

4. Let them know you got the message

This is something else that took me a while to learn the importance of, but now I do my best to adhere to my new policy of at least letting people know that I have received their messages. I get a lot of emails that I can ignore or reply to immediately, but there are those that come in that require some focused reading, or perhaps some further research. I don’t want to lose these, but I also don’t want to continue to hear from those select people, wondering if I’ve received their message and what the next step is.

I've taken to telling the person I have been corresponding with that I received the message and that I'll do my best to respond to him or her in a timely manner. The exact definition of “timely” certainly is fluid, but by at least acknowledging the message, I help manage the other person’s expectations.

Oftentimes, people are simply waiting for a response, and they’ll continue to reach out until they hear something. Once they know you’ve gotten it, people are often much more forgiving with time.

Autoresponder messages can be annoying, but again, they help manage expectations, and they sometimes lessen the number of follow-up emails you’ll receive. If you never respond to an email and you don’t have an autoreply set up, other people have no idea what’s going on, and they're more inclined to email again and ask what’s up. If they see that you’re traveling, at least some of them will be willing to sit back and wait for you to be done.

If it’s an email that needs to be answered, you can feel free to get back to them immediately, but by having your email service automatically alert your colleague that you may not be replying anytime soon, you’re not expected to. In fact, whenever I respond to a message after the person has just gotten an out-of-office reply from me, they sometimes comment that they're impressed I still answered, and that wins some points.