5 Ways to Jumpstart Your Musical Creativity 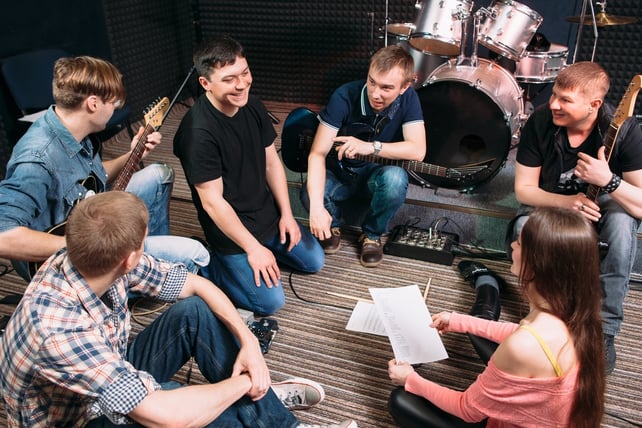 Creating music is difficult, but nobody said it was going to be easy. You need to learn to play an instrument, practice every day, and on top of that, you’re expected to share your innermost feelings and emotions, and doing so eloquently is a daunting task.

Sometimes it’s not just the beauty that isn’t immediate, it’s anything. Everybody hits snags when they’re involved in something creative, and music is notorious for catching people in spells of indecision, doubt, and pure nothingness.

If you’re having a hard time getting over the blank space in your mind, here are a few tips that can help get the ball rolling.

The hardest part sometimes can be just getting started, so one of the best pieces of advice I can offer is, well, just get started. I know that sounds like a very not-helpful comment, but it actually can be the best way to kick things off. Putting pen to paper can help get your creative juices flowing, and though it may take a while, you need to keep at it, and eventually you’ll see your words start improving, and true themes and ideas may come to life.

It can be helpful if you start with some vague ideas, words, or even a line or two you’ve had laying around that sound like they might be useful, but this tip can be applied to almost any time when the lyrics or music just aren’t coming. You may find that what you first come up with is completely terrible, or perhaps it doesn’t even make sense, but that's all part of being creative.

[Why Songwriters Should Embrace the Rewrite]

Many songwriters have a hard time not being critical of their own work, and that’s usually a good thing. What artist wants to spend time creating something that, in the end, isn’t actually all that good? I’d never suggest that a musician write terrible music and share it, but making bad things is a great way to eventually make good things. You need to stumble, fall, and completely fuck up in order to find out how to create truly wonderful tunes.

Your music will never be “perfect,” but it should be the best it can be for you – though, that’s not something you should concern yourself with at all times. If you’re having an especially difficult time working out the words or melodies of a song, try to get something down and finish it. The track doesn't need to be finalized just yet; that can come later.

Editing is important, but before that, you need to have an actual song to rework, so forget about getting it exactly right the first time and just get it done. I'm not a songwriter, but this practice has helped me when trying to get through phrasing and wording on tough articles, and I’ve heard it works well for almost anything involving writing.

Sitting in the same spot isn’t a great way to feel energized and excited about writing something, so why would you do it? To get things flowing, try doing almost anything physical, be it walking around, a few exercises, or even just changing where you’re sitting. Go to a coffee shop, stand up, lay upside down, or drive around.

It doesn't matter what works for you, or even if you aren’t sure what that is just yet. Trying things is the only way to figure that out, and none of these options will hurt your writing, that’s for sure.

Seeing that you’re a musician, you probably already listen to a lot of music. That’s great, as it likely inspires you, and there are influences of some of your favorite artists, songs, and albums in your own music. If you're finding it difficult to craft that next tune, try playing something completely different from what you're used to and letting it soak in.

If you’re a rock guy, turn on some hip-hop. Working on a pop song? Think about electronic melodies. Sample styles of music only popular in remote parts of the world, and try to hear what makes them so special. Again, even if this tip doesn’t come in handy at the moment, you won’t be hurt by exposing yourself to new music, and you never know when something will pop up later on in your songwriting endeavors.

[4 Signs You're Totally Ready to Experiment With Other Genres]

It’s tough in our increasingly connected world, but sometimes you just need to turn everything off and focus on one thing. Yes, that’s right, I said focus on one thing. If you're trying to write a song while the TV is on, you’re answering emails, and you’re browsing Twitter on your phone, you aren’t giving your art the attention it deserves.

Even if you’re not actively doing all of these things (or the million other distractions available to you at all times), you should put away your devices, turn off your internet, or remove yourself from certain locations. Do whatever it takes to ensure that you are 100 percent focused on the blank page in front of you.

Next up: 10 Quick Tips to Help You Be a More Creative Musician