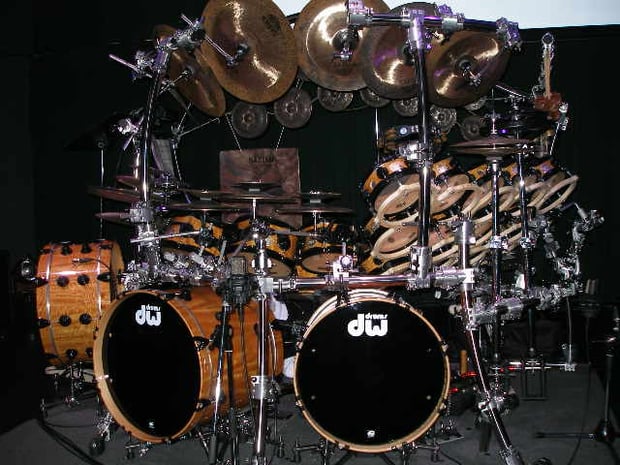 Where does the 800-pound gorilla sleep? The same place that the virtuoso drummer plays: wherever he wants to. Good drummers are in constant demand, able to write their own tickets, and play with whomever they’d like. And there are never enough of them around.

A good drummer can find him- or herself in the rare position of being the subject of a bidding war, able to choose the best paying gig or the one that's most artistically rewarding. To get there, you need speed, technique, and a car that gets you to rehearsal. But more than any of those things, you need feel and creativity.

The essential challenge of the drums: most of “getting good” involves repetition and patterns. But being a creative player means freedom, spontaneity, and constant change. After all the dragadiddles, rolls, and Swiss Army triplets, are there any exercises to increase creativity? Well, of course there are! But don’t skimp on your 40 rudiments, either.

1. Play along with things that aren't music

So much of music is rigidly constructed on a computer nowadays. Of course, electronic music can have tempo changes, gradual slowdowns, and snappy grooves, too – but lots of it doesn’t.

Playing along with a beatbox can make your beats a little too square. So find soundscapes that aren’t musical at all and have no tempo: natural sounds, political speeches, animal noises, whatever you can find that has no deliberate rhythm. This technique is like a sensory deprivation chamber for your drumming senses, forcing you to invent music on the spot.

2. Write a song for your band… on the drums

How often do you arrive at band practice and find that your guitarist or bassist has brought a new song to learn? Songs written by stringed instrument players tend to have a certain set of common rhythms and patterns that are native to those instruments.

A song written on, and for, the drums takes the group in a different direction, letting other players write to your parts instead of vice versa. It also frees you, as the drummer, to incorporate ideas you’ve been working on that aren’t easily integrated into songs written by others. Most huge hits have very distinctive beats, so your interesting rhythm could become your band’s hottest track.

You’re usually the only drummer onstage or in the studio, right? Creating space for other percussion isn’t something you typically worry about. That’s the percussionist’s job. Well, what if “When the Levee Breaks” had a second drum track? Take songs you love and become that second drummer, creating a part that meshes with the first without trampling it.

It’s surprisingly difficult to write a cool part that adds to the groove instead of distracting from it. Becoming better at sharing the percussion space will improve your imagination and help you write stronger parts.

If you’re a drummer who relies on a steady pulse on a ride or hi-hat, try taking that pulse away. There are times when that constant patter doesn’t work compositionally. If you don’t ride steadily on something, you’ve got four limbs free to find another way to produce a groove, and you might find that, like Forrest Gump, what you thought was holding you up was really holding you back.

Silence is often the most powerful element of a groove, like the dark matter that holds outer space together. Create some patterns with missing beats and learn to play these subtractive grooves. They can sound pretty unearthly, too, when played at speed. And they'll be so awkward the first time you try them that you'll know you're improving.

Guitarists often fool around with licks that sound like speech, or another vocal sound (Like Steve Miller’s guitar wolf whistle on "The Joker"). Are there any spoken phrases that you can emulate with your set? Think “shave and haircut, two bits.”

The best lead guitarists make their guitars sing. You can make your drums talk.

Next up: 6 Secrets of Getting a Fuller Drum Sound on Your Recordings