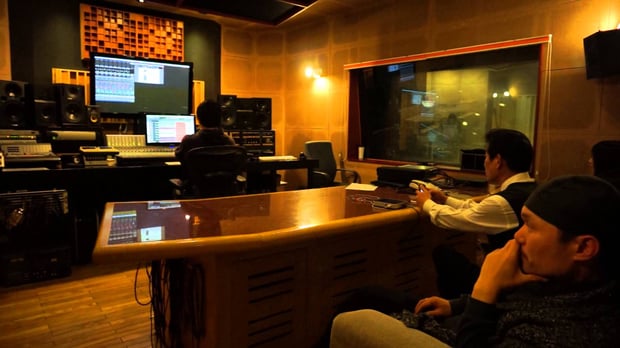 Mixing engineers are like a referee on a football field. When they're doing their jobs, nobody notices that they're there at all. The music flows, uninterrupted, and the sound of the recording is appropriate for the message of the music. But a bad mix is a disaster. It backs listeners away from the song and goes against the grain of the artist’s vision.

All too often, a bad mix is a boring mix. Lacking an understanding of what’s inside your artistic head, whoever mixes you might just line the tracks up in a row, left to right, like prisoners in a police lineup. But mixing is a three-dimensional art. Panning across the stereo field is only one way to create a sonic space. Here are six other tricks that construct a homey space within a piece of music, creating interest, depth, and ambience.

1. Compression: make the track stand up

When something important – particularly a lead vocal – is getting buried in a mix, it might be time to add some compression. Compressing will cause that wayward track to stand head and shoulders over the rest of the mix – without making it annoyingly loud. This is because the quieter syllables or notes are being brought up closer to the peaks, so details aren’t lost behind louder instruments.

But be careful: with compression, a little dab will do you. Rolling on too much will make the track sound plastic and phony. As always, listening to the track on various systems and speakers will let you know if you’ve used too much or not enough.

2. Microphone placement: give the track depth

Sure, you could record everything with the same microphone placement, but then everything would sound the same distance from the listener’s ear. When you pull the mic back, you create depth. Tracks recorded with a deep microphone will sound farther away in the mix, as though they were physically behind the lead vocalist. This is a neat trick that creates the illusion of a live band playing in the room.

Watch out, though: backing the mic away will admit more room sound to the recording, so you’ll need to be in a sweet-sounding room and be sure to control bleed from other sound sources. You should also be ready to roll on some high equalization to maintain detail. This technique is most commonly used for drums and percussion, but if you’re distance-mic'ing a drum set, the room should be well damped, without too many hard surfaces to cause slapback and harsh equalization.

You can also use more than one mic per performer. On vocals, for instance, using one close microphone with another one further out creates a nice natural reverb and adds color and detail to the recording.

Who says your tracks need to stay in one place in the mix? You can create the illusion of the instrumentalist or singer moving around in your virtual room. Most people do this using stereo panning, but by adjusting bass or treble at the same time, you can create a more dynamic sensation.

After all, the EQing of sound sources changes as they move in real life. Imagine someone speaking to you from a different room, then walking towards you. The sound source moves in the stereo field, with its equalization changing at the same time.

4. Classic microphones: send the track back in time

Using a gimmicky microphone, or a classic older one, instantly creates a sound and feel that’s hard to emulate with a bunch of digital gear. A vintage mic can make your track sound like it’s being piped in from another era. This creates instant sonic interest and starts to set up a strong general aesthetic for your recording.

Of course, it doesn’t need to be a classic microphone. You can also find ways to incorporate the mics from computers, phones, and boomboxes. Even a pair of headphones or an old stereo speaker can function as microphones if you plug them into a microphone jack!

The mixing process tends to accrete effects as it moves along: compressors, noise gates, reverbs, and echoes start piling up in the mix. These are all part of the package deal of "professional" recording, and all play their role. But at a certain point, when a song just doesn’t sound right, you’re going to switch all that stuff off and make a track dry again. At this point, you’ve just changed the energy and the intensity of the track, and it could be exactly what your song needed.

Mixing on digital audio workstations gives us all superhero powers when it comes to effects and editing. But we need to use that power wisely and sometimes hold back a little.

6. Speed and pitch: send the track to another realm

In fantasy and science fiction, people often end up in some alternate universe in which time passes at a different speed. (Think The Lion, the Witch and the Wardrobe.) You can send your tracks there, too, by adjusting your speed and pitch.

This is an old trick we learned when using cassette four-track recorders back in the day. Most four tracks had a speed-adjust dial, so if you wanted to record an epic drum track, you’d just record at a slightly higher speed (and play a little bit faster) and then play the track back at regular speed. Today, on digital platforms, you can also monkey with the relationship between speed and pitch. For example, you could slow a track down without lowering its pitch, or vice-versa.

These techniques can produce trippy effects, especially when used on drums or guitars. Be careful speeding up vocals, though. A little chipmunk tone goes a long way! A little goofball humor is a great thing in recording, as long as your audience is in on the joke.