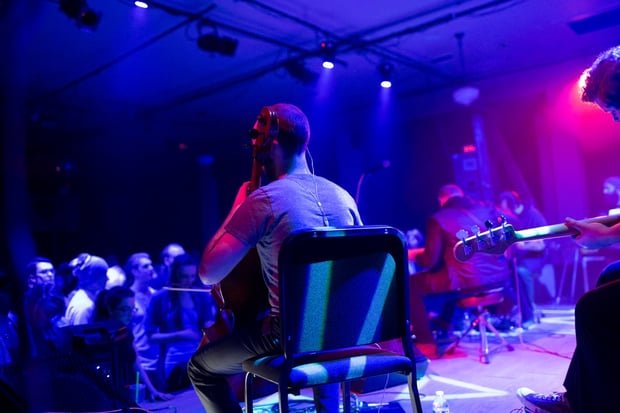 All independent musicians at some point are going to go through the process of booking their own shows. This means identifying, contacting, and performing at venues across your hometown and beyond. But all venues are not created equally. Sometimes it's because the management is shady; other times it's because the sound system will give you tinnitus. Either way, you shouldn't play a show just for the sake of playing a show, and you shouldn't book a venue just because they'll have you.

While some nightmare experiences at venues are completely unpredictable and out of your control, many of them are totally avoidable – if you know what to watch out for. Here are the top seven red flags that a venue will be more trouble than it's worth.

1. You'll be getting zero promotional help from the venue

Most venues expect the artists to promote each show — that’s built in with every gig. You're being booked because of your fanbase. Unless the venue is also a bar that has a built-in crowd, it depends on the music to fill the room. However, no venue should 100 percent depend on a band to promote the show.

If a venue's social media pages are inactive, the managers don’t hang posters, and they have a reputation of never promoting, that isn’t a good sign, and you'll want to think twice before booking a show there. A good venue will post flyers on its Instagram, create Facebook events, share YouTube videos of the performers as a show approaches, put up posters in the windows, etc.

Venues need to make money, too, but if a venue isn’t willing to lift a finger to promote, you might want to really ask yourself if it’s worth it to perform there.

2. You have to pay to play (without opening for a bigger talent)

We all know the pay-to-play model better than we care to admit. It can be a crucial investment in your music, but it can also be a scam. Venues that make you pay to play without anything to offer in return are not worth your time. If you have to pay to just perform with other local bands that will likely draw a crowd no bigger than yours, then you’re better off finding a venue that will give you a percentage of door and bar revenue.

Paying to open for a famous band or to perform at a big festival can be a smart investment in your music, but paying to play at a small venue that really promises nothing in return is going to be more stressful than it’s worth.

3. The venue doesn't seem to put much thought into lineups

A poorly managed venue is one that doesn’t do its research. Sadly, it’s not terribly uncommon for venues to pile bands in completely random genres onto a lineup just to get as many people in the room as possible. That's not to say you shouldn't book shows at venues that are open to a wide range of musical styles, but a venue that doesn’t seem care at all about who you play with is worth avoiding.

It might feel great to be booking a show, but if you're playing in front of the wrong crowd, the best-case scenario is that you'll be ignored by the audience, and the worst-case scenario is that you'll end up making anti-fans. Find venues that actually put effort into the lineups — venues that know a thing or two about bringing in people with similar interests to experience a whole show, so that all the bands have a real chance to gain new fans.

[How to Pick the Right Band to Tour With]

4. The sound system is unbearable

Unfortunately, every musician is going to play more than a handful of rooms that just sound bad. Either the acoustics of the room are completely unforgiving, or the sound system is so cheap, old, or broken that you can hardly even make out what you’re hearing.

If the venue that you’re thinking of booking a show at has a notoriously horrid sound system, is it really going to be a good representation of your band? Check out a show at the venue in advance – if a muffled, distorted sound comes out of the singer's mic rather than a clear (or at least semi-clear) vocal, that’s a sign that the venue probably isn’t worth your time. Your fans might forgive you, but if new people are hearing your music for the first time on an awful sound system, they might not be generous enough to give you a second shot.

5. The venue overcharges its customers

Some venues like to jack up the price at the door way beyond what you (and your friends and fans) are accustomed to. If you’re unable to negotiate with the venue staff on the price of tickets, and they're insisting you charge way more than you’re comfortable with, don’t waste your time.

Say you typically charge $10–$15 for your shows. If, out of the blue, you ask your fans to pay $25–$30, they’re not going to be happy, unless you have some incredibly special event planned. Practically speaking, don’t try to play at a venue that’s going to ask too much from your fans. Sure, you might be offered a nicer guarantee than you’re used to, but don’t expect them to book you again if your fans can’t afford to get in the room!

As a performer, it's completely common (and smart!) to have the promoter or talent buyer sign a performance contract that negotiates the settlement, pay, event details, etc. This ensures that both parties will know exactly what to expect from the show, so that there aren't any misunderstandings. However, if they seem hesitant or flat-out unwilling to sign a simple agreement, that's a big red flag that they might be planning to take advantage of you.

At the very least, there should be a written agreement that ensures you know how and when you'll be paid, and what the venue expects to make. But if it's all up in the air, and they won't commit to a contract, the venue could easily change its "terms and conditions" last minute – and guess who's going to get the short end of the stick? (Hint: that would be you.)

7. The communication is one-sided

This is one of the most important red flags to look out for early on in the booking process. If you find yourself sending email after email with little to no response, the venue probably isn't going to be reliable in helping you put together a strong show. Sometimes, a talent buyer may respond promptly, but it'll be short, unprofessional, and only address one part of your email. Even worse, you'll just be ignored.

It's a shame, but some venues that have great reputations for the concert experience happen to have horrible management. Planning a show takes tons of communication, so if it's pretty clear that you're the only one putting the effort into communicating, do yourself a favor and do not book a show with that venue.