Lesson Learned: I Got Ripped Off by a Venue 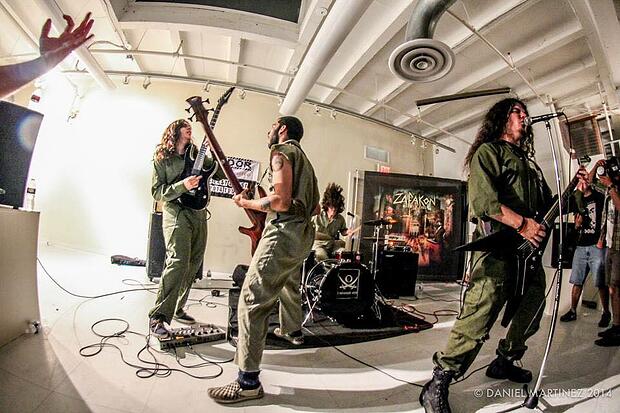 Zafakon, a thrash metal band from Puerto Rico, experienced a bit of a debacle on their recent US tour. (Photo by Daniel Martinez)

You get lost between cities, your van breaks down, your merch didn't ship in time for the first show – these are a few of the unfortunate but common mishaps bands experience on tour. There's a less likely but arguably worse potential pitfall, though. What do you do if a deal with a promoter or venue is broken?

It happened to Puerto Rican thrash metal act Zafakon. Bassist Weslie J. Negrón describes a recent date in the States as, well, kind of a disaster. They'd organized the show through a like-minded local band they'd met in San Juan a few months earlier. They were slated to headline.

"When we got to the [venue], no one was there," Negrón says. "And later, [our contact] showed up saying that [his band] wasn't going to be able to play because their guitar player quit the band. Well, I was fine with that, because those things do happen, right? So, we just kept getting ready for the show. He disappeared without ever telling us who the promoter was or whatever."

Things got worse for Zafakon from there. With nobody around who'd had any prior contact with the group, they found themselves at the mercy of a rather merciless sound engineer.

"The first thing he tells us when we get there is, 'Oh, you're the shit band from Puerto Rico?' Then, while setting up our stuff onstage, he started doing things [that made it seem like] he didn't want [us there]...like pointing us at with a laser as we were playing. And, to put the cherry on top, they had TVs where they would put the logo of each band that was playing, and for us, he spotted a logo we used during Christmas last year and put that on the TV. That was in July," Negrón says. "We didn't get paid. We played in front of six people."

Negrón admits there was no written or verbal agreement about money. He'd asked for "anything they could give," and assumed that would mean at least a little pay.

For fledgling bands on the road, it's the stuff of nightmares: A promoter or club owner offers drastically less than agreed upon, or refuses to pay altogether. You weren't expecting to be handed a two-inch-thick wad of cash, but you were counting on a certain amount of compensation to help fund your journey to the next city. When something like that happens, most folks' knee-jerk reaction is to get angry. Of course, as a general rule, that's not a very helpful way to handle a situation gone awry.

Negrón and company managed to mask their frustration. After the show, he recalls, they thanked the sound tech, albeit a bit sarcastically. Their ties to the band who'd hooked them up with the out-of-town show are pretty strained – he says they still have yet to apologize. But they've since run into them again without confrontation.

"Try to see if other people have played that venue before, and see how their experience was playing there," he suggests. Another solid idea: Get a contract signed beforehand, or at least have proof in emails or text messages of what was promised. "We've got into another level on this thing. It's no longer only for fun; now it's gotten serious, and we need to watch our expenses and such. It's just that I'm too much of a good guy," Negrón says. "But in this business, you cannot be too much of that."

There's a fine line between making money a priority and being flexible with promoters and venues on guarantees. The latter should resonate with brand new bands in particular, but all groups can learn from what can happen with the lack of a non-negotiable agreement. You should always discuss your payment – as well as promo, load-in, sound check, and equipment – well before the night of the show.

This is the first installment of Lesson Learned, a new series where we share bands' tales of bummers, bad luck, and other types of setbacks in hopes that other artists can better avoid similar situations. Look for the second installment in the coming weeks.