7 Solid Tips for New Bands From a Seasoned Career Musician 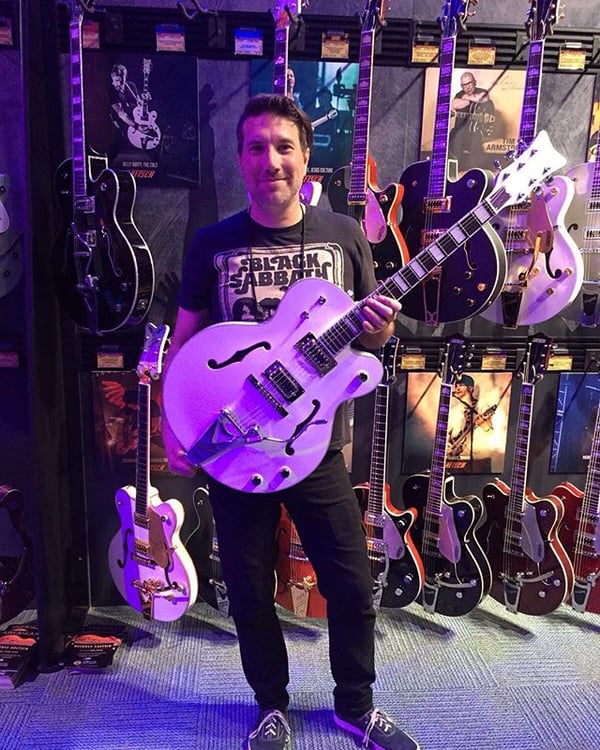 Rick Jeschke Deliz is a music-industry lifer, no doubt. His career, which spans more than 30 years, is a panoply of covetable gigs: playing with major-label artists, performing to big crowds all around the world. The advice Deliz doles out is pragmatic. It's more useful than what you'd get from a musician in a mega-famous band, because this is about working the industry in a financially realistic way – and persevering even when your prospects look bleak.

Deliz first picked up guitar at 16 while living in a small town in Puerto Rico, where he grew up after moving from Erie, PA. After earning his bachelor's in music from the Inter-American University of San Germán, he went to Hollywood to continue his studies at the Musicians Institute. Post-graduation was when things really got rolling. Before leaving LA for Mexico City, where he's lived since 2007, Deliz contributed to projects by Latin pop and rock artists like El Vez, Cristian Castro, Pastilla, Lysa Flores, and scads more. Since then, he's toured with the likes of Ha*Ash and Belinda, two massively popular major-label Latin pop acts.

Currently, he's directing and playing in the backing band on a far-reaching joint tour with Magneto and Mercurio, two much-beloved Mexican boy bands who hit the big time in the '80s and '90s, respectively. Promoting Gretsch guitars, his sponsor, is an ongoing gig, as well side projects like his surf band, Secret Agent, and several tribute acts. And occasionally, he DJs electro under the moniker Dr. Hell.

We asked Deliz about his regrets and misconceptions later clarified by experience. Instead of serving up a lot of "don't this and don't that," his responses always included an encouraging angle. That's an important takeaway to add to the seven tips below.

"Being a musician means long hours of practice and dedication to your instrument, lots and lots of rehearsals, little sleep, and lots of traveling, missing out on cool events or happenings, and sometimes dealing with self-doubt, rejection, and other negative emotions while trying to earn a living playing music. Seems real easy when you just see somebody onstage rocking out, but [you're] unaware of the behind-the-scenes reality."

Remember that you're ultimately responsible for the success of your career. "If it's truly your passion and you're hoping to make it a career, then just do it daily, like if it's your personal startup company and you are your own boss. Make your own schedules for progress, daily instrument practice, [etc.]."

2. Learn from the low points

"I've been in bands for years that never 'made it' and had to cut my losses and quit, and have been fired from side gigs and/or bands for one reason or another, and one can see it as mistakes. But, in reality, I believe that it's all a learning experiences as that true path will show. You will feel the synchronicity happen as if 'this is what I am meant to do or be in,' and if it doesn't last, there again will be countless opportunities down the road, so be open to them."

3. Take risks in your career choices

"Life starts outside your comfort zone, so take the challenge. You'll be surprised how we adapt to different situations and get better at them if we let ourselves have that experience and embrace it."

4.Stay positive about your true goals

"Usually I find myself in eight to 10 bands/projects at once, so there's always something to do, but not all make the bread-and-butter money.... There have been times where it's slow there, but I sometimes manage to maintain afloat [with] faith, because miracles do happen every day. I'm learning not to stress and focus on what I want/need to be happy and [be] grateful...enjoying what I do. Nothing wrong with accepting work on the side to pay the bills, but keep focused on the passion. In my case, I worked retail at guitar stores and learned a lot there, and it is related to my passion, so it all counts."

5. Don't intentionally limit yourself to one style

"Jam with everybody that you can and don't box yourself into genres or styles. Just follow the music."

6. Look up to leaders, but don't lose yourself

"Find a mentor [and] choose role models, but remember that every path is different for everybody, so be your own critic. Don't compare yourself to anybody. We are all unique...don't let outside criticism or rejection derail you. This will only make you stronger, and believe in yourself."

7. Find faith in the fun of it all

"Most importantly, have fun with it. Don't take yourself so seriously. Life is too short to spend it full time on trivial jobs or passionless roads; those are only a means to a way to fulfill your dream, so keep that alive and kicking. Sometimes it will take you to places your never even imagined before!"

Jerry Only of The MISFITS @NAMM2016