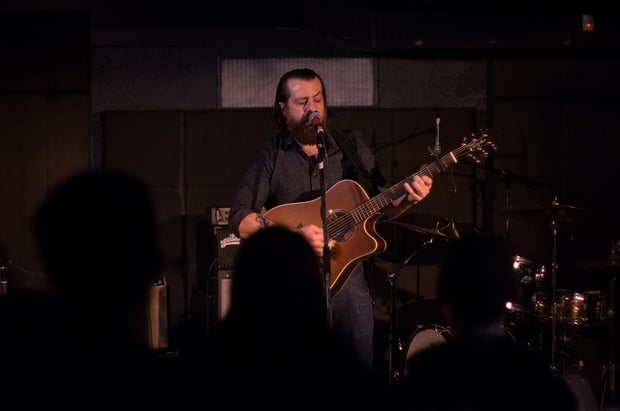 Let's face it, solo acoustic performances are often boring as hell. Even when talented people are performing, there's a sense of sameness to the them. Ari Herstand wrote a great article recently giving 8 reasons why singer-songwriter shows are typically a snoozefest after being confronted by a journalist posing the question.

I can't count the number of times I've seen patrons walk into a bar or club and groan when they realize a person with an acoustic guitar is onstage. Or get up and leave when someone begins strumming in the corner of a coffee shop. Or, worse yet, ignore the singer while the chatter reaches decibel levels louder than what's coming out of the PA.

One reason I've seen this happen so much is because I've been the person onstage with the acoustic guitar. Over time, I've realized you can't please all the people all the time – many will always balk at the sight of a solo singer/songwriter – but you can please a lot of the people most of the time by taking some steps to help ensure your solo gigs don't suck. Here are nine solutions to keep people interested.

1. Learn to be your own sound person

Oftentimes, the reason people aren't so into your performance is because the sound sucks. This is usually the case in coffeehouse type venues where there's a PA but no sound engineer. In these situations, you need to know more about creating the right sound for the room than adjusting the levers so the monitor board resembles a smiley face.

[Understanding Acoustics: How to Sound Your Best at Your Next Gig]

2. Stop strumming the same chords so much

Strumming the same I-IV-V open chords over and over for every song is a ticket to Yawnsville. Fingerpick, play up the neck, try alternate tunings. Modulate the key. Use the strings as a percussion instrument by muting them with the base of your palm while strumming. That sort of thing. Anything to liven up the music and provide some sonic adventurism to your set.

3. Become comfortable in your space

If you're uncomfortable onstage, it's the first thing an audience will pick up on. In response, they'll either become uncomfortable themselves or tune you out. A fellow singer/songwriter once told me that he drew an imaginary three-foot wide circle around himself at the mic that became his space. Like a mini bedroom. You can do whatever you want in there, and no one can penetrate your space. Bring a throw rug from home to stand on, put up pictures of your dog, whatever it takes to help you own the space you stand in.

4. Expand your space with effects

Effects pedals aren't just for lead guitarists. With looping effects you can create a sonic atmosphere onstage to fill up the space and flesh out the song. As a solo act, it's best to use looping effect pedals minimally, saving them for your best songs later in the set. And don't make a big deal of it, because trying to wow the audience with effects only means you don't have the chops to do it yourself. Subtle is the name of the game concerning using effects as a solo artist, with hints and accents to build the song up while the audience doesn't even realize what's happening.

5. Talk to the audience

How you engage an audience between songs is just as important as how engaging your songs are. If you're not a natural with talking to people and telling stories, craft your song intros as if they were songs themselves. Test them out on friends to see how they go over. Then rework. Tip: don't ask a question of the audience, even a rhetorical one, unless you're ready to improvise off your script. Audiences will always give you an answer, but not always the one you want to hear.

6. Make it an in-the-round show

Instead of doing a solo show, make it an in-the-round with two or three other solo acts. The song-for-song, back-and-forth interaction between performers makes for a more inviting atmosphere for performers and the audience. The writers' in-the-round setup has proven successful at many of the nation's top acoustic venues such as Nashville's Bluebird Cafe and Eddie's Attic in Decatur, GA, among many others. And venue owners love it because it brings in more people. Downside: you'll have to split the money a few ways.

This is a tough one, because you may think you're funny when you're not. But if you can make people laugh, it's the easiest way to win them over. A well-told joke between two serious songs is a godsend for an audience, especially as it relates to all the seriousness. When singing about dead dogs and lost love, for God's sake provide some comic relief. Use yourself as a punching bag if you must, because everyone loves someone with a self-deprecating sense of humor over someone who takes him- or herself too seriously any day.

8. Don't think you're above playing covers

Herstand made the point in his article, but it bears repeating. The right cover song at the right time can make all the difference in the world. Whenever I feel the audience slipping away, I like to play "Blister in the Sun" by the Violent Femmes to win them back. It works for my style of music and the types of venues I perform at, because it's a catchy, fun song that most everyone knows. Find your "Blister in the Sun." Or try something completely off the wall for your style. I used to play solo acoustic shows with John Mayer back when he was still playing small clubs; Mayer's go-to, off-the-wall cover back then was Cyndi Lauper's "Girls Just Wanna Have Fun." Audiences ate it up, and the girls always got up to dance.

9. If you make a mistake, keep going like it didn't happen

Flubbing a chord or forgetting a lyric is always tough. The mark of an amateur is becoming visibly flustered, or even stopping, after making a mistake. It happens to pros all the time – the only difference is pros have enough experience to make a seamless transition from the snafu back into the song, often without the audience realizing there was a mistake. Sometimes when I mess up, I'll purposefully play the wrong note or chord again, as if I planned it, and keep going. It doesn't always work and you may have to give a wink, but the worst thing you can do is stop and get mad at yourself. If you forget a verse, go to the chorus or bridge instead circling round and round trying to remember your lines.

Bottom line: treat a solo gig like you would a first date with a person you've had a huge crush on for months. Sure, you're bound to be nervous, but what works in the dating world – i.e., having a great sense of humor, being yourself, acting natural – also works onstage. The truth is every gig is more like a blind date, one where the audience can get up and leave at any time, but you can't. So it's up to you to spice things up and make them want to see you again... and again.