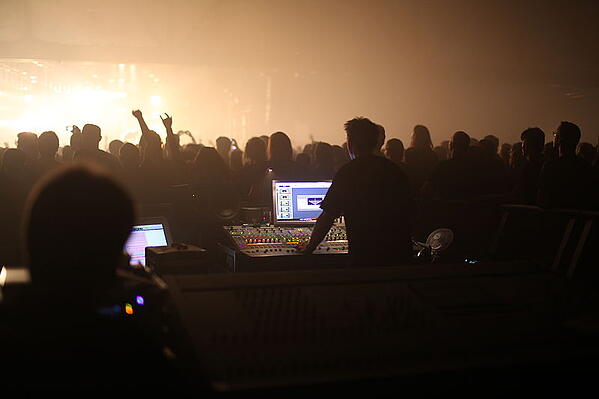 Working with the sound guy at each gig isn’t just about dealing with the guy trying to plug everything in at the gig. If you don’t have a road manager handling your gigs, you need to know some things about what kind of time frame is considered good for communicating and preparing for each gig.

Send (mail or email) your tech rider and stage plot to the sound guy. If you’re unfamiliar with what that means, read up on how to write a good live-sound tech rider. The sound guy needs to be prepared with all the necessary house or rental gear for each group that is playing, especially if there are band switches. Failure to do this will cause unnecessary stress and will delay the night. Also, expect a timeline from the venue as to when you will be able to load-in and when the sound check will be, as well as the plan for the event.

Call the venue. Ensure that you have sent them everything that they need from you, and also ensure that they are providing everything you need. Miscommunications happen, so be prepared. Talk directly to the sound guy, not the booker. The booker is already focused on dealing with the next gigs, and may not be certain that the sound guy has everything. Also, be sure to introduce yourself. Professionalism from you helps to assure the sound guy that you’re knowledgeable and ready to work together.

6-8 hours before the gig

Call the venue again to ensure parking for loading your gear in. This is important whether you’re playing in a downtown area with poor parking or at a venue with multiple other bands and everyone’s competing for space.

This will depend on the timeline that the venue sent you. Larger bands or several bands will require more time. Expect to go in event order if there are multiple bands so the stage crew can have a rehearsal of the change-over. While you’re waiting, do your tuning and have everything ready to go so the changeover happens quickly. Be patient, because while you may be professional, someone else may not, or the inevitable appearance of Mr. Murphy may cause a delay. When it’s your turn, expect 2-3 solid minutes of check per instrument or microphone, plus about 10 minutes of the whole group. Be sure to also ensure that you’ve got your monitors doing what they want as well. The sound guy is working hard and stressing, so the more chill that you are, the better.

Thank the sound guy and the booker, but especially the sound guy. An emailed thank you note goes a long way when the sound guy talks to the booker about bringing you back or when he talks to other venues. Higher level of professionalism means a better reputation with the venues, which translates to more gigs and more money.