Are Your Internet Fans Your Real Fans? 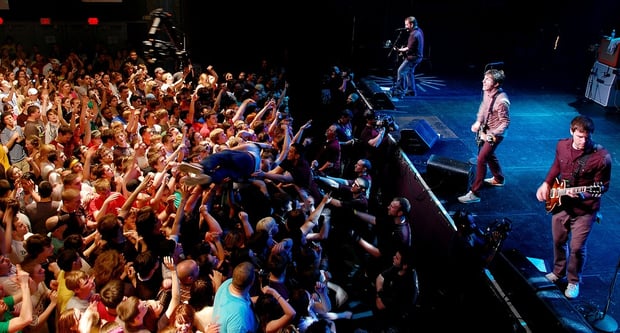 In today's digital-dominant era, it's hard to distinguish the difference between artists who are "internet famous" and the ones who have a tangible, supportive audience. Some people are of the opinion that online parameters such as Twitter and SoundCloud followers are the primary indicators of an artist's popularity. Social media metrics provide valuable information for every type of business, and the music industry is no different. However, the lines are blurred in the world of independent music due to people taking advantage of loopholes in certain platforms as well as the classic, ill-advised decision to purchase fake followers. So while it may be the easy route to evaluate the legitimacy of an artist by quickly searching his or her name on your social platform of choice, there are other factors in play which provide more definitive insight into the reputation of an artist, with the central component being the strength of his or her fanbase.

It's now commonplace to see artists rise to internet fame off the strength of one song which happens to go viral. Virtual unknowns can transform into digital superstars overnight, and fans feel obligated to ride their wave of popularity. And while it's possible to maintain a long-tenured career based on this path of short-term success, many artists tend to "flame out" and lose their fashionable, yet short-lasting appeal. This series of events is a primary example of internet fame being misleading to artists who feel they've "made it" from one hit single or music video. Using statistics such as YouTube plays as measurements of success and growth is standard practice and by no means a wrong approach, but it shouldn't be the sole approach – and every number should be taken with a grain of salt.

As an independent artist, the question you should be asking yourself is: Out of your total sum of plays/followers/likes/etc., how many of these people would support your music when you release an album, or attend a show if you're playing in their area? This is where the significance of online engagement comes into play.

[The 4 Easiest Ways To Show Your Fans You Care]

The unfortunate reality of digital music platforms such as SoundCloud, YouTube, and even Twitter is the fact that numbers can be manipulated. From sharing music across an endless sea of accounts to flat-out buying followers, many artists will choose deception as a means of looking like they're important on social media. But intelligent folks who work in the industry can easily spot what's fake, and the metric that ends up counting the most is fan engagement. Anybody can buy followers for a relatively cheap price, but an artist cannot force someone to send out a comment such as, "Your music is uplifting and helps me get through my day," or "I love your album! Keep working and growing!" These kinds of comments are a true representation of a real-life fanbase that has a genuine interest in the music you're creating.

Chance The Rapper is a fitting example of an indie artist who has developed a strong, tight-knit connection with a devoted fanbase. Whether performing a free show or announcing a new piece of merchandise, his fans are extremely enthusiastic in vocalizing their support for both his music and his personal brand. And while pretty much all artists rise to prominence by means of the internet these days, it's the pure fan interaction which marks the difference between those who are working on behalf of their own reputation and those who want to change other people's lives with their music.

Ultimately, it takes a sincere level of reflection to evaluate your status as an artist within your local scene and beyond. You're bound to come across people who promise you a certain number of followers and plays, and it's vital to realize that those offers don't represent an increased fanbase. Take some time out of your day to explore social media to see who's sharing your music. If you see a wide range of blogs and random strangers commenting on your work, that's a good sign. If you only see your friends, peers, and local blogs you have already connected with sharing your music, that's a sign that you need to work on broadening your fanbase. And if you have 10,000 SoundCloud followers but only 500 plays on the songs off your album, this means that your online artistic identity is not in tune with reality.

So no matter how tempting it is to get tangled in the web of social-media maneuvering, be honest with yourself and take a truthful approach in building up your fanbase. It may take longer than you'd prefer, but your artistic identity will be deep-rooted as a result, and your music career will benefit in the long run.