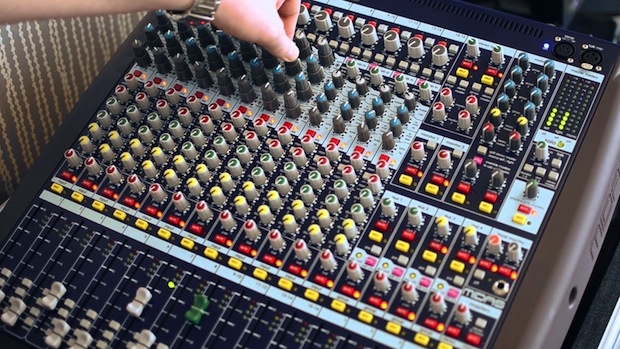 EQ. It's a noun, a verb, and a label often seen on knobs on music gear. These two letters get thrown out all the time in the audio and music world, and often many people don't even know what they actually mean or how it all works. Equalization, as with many other topics I cover, can very quickly become a convoluted and confusing technical topic.

I mean, just look at this stuff!

And that's not even for some crazy calculation – that's for determining a basic filter's effect on an audio signal's phase response! Combine that with the fact that some of our most cherished and desired pieces of audio gear were designed when people were doing these calculations by hand or with slide rules long before computers. You can quickly see how calling it confusing is almost an understatement. Thankfully, most of us are using this stuff instead of designing it. I digress. Despite being one of the most complex-yet-basic and abundant tools (I mean, your 1991 Honda Accord LX car stereo even has EQ controls, however basic they may be), using EQ effectively can really separate the proverbial men from the boys.

A quick primer on EQ

EQ, in its most basic form, is usually a series of filters placed in the path of an audio signal either in an analog or digital format. These filters (at their most basic, usually some combination of capacitors and resistors in some sort of series) affect the overall perceived harmonic frequency content of an audio signal. Oversimplified translation: they change the way things "sound" by adding or taking away content in certain frequencies. This effect comes in several different flavors:

Both on the stage and in the studio, you'll usually see a couple of types of EQ equipment.

For many people, this is the iconic unit they think of when they picture an equalizer. It typically has a number of small faders, each one covering a predetermined frequency range that can be boosted or cut accordingly. The features of each of these bands are fixed, but a graphic equalizer allows a quick, hands-on, and highly visual way to quickly adjust signal over the entire audible spectrum at a number of points.

This type of equalizer usually has several filters (often significantly less than a graphic equalizer) that, as the name suggests, have fully adjustable parameters. These parameters usually consist of the affected frequency, the amount of boost or cut applied (usually measured in dB), and the bandwidth (the number of frequencies around the affected center frequency, often referred to as Q).

How to use EQ in a live setting

There are a number of ways that equalizers get used in the professional sound reinforcement world.

Every performance space is different, and more often than not, they're not always designed with optimal acoustics in mind. Let's be honest, most large venues share the same acoustic sophistication as the bottom of an in-ground swimming pool. Using an EQ, often in this capacity a graphic equalizer, the overall frequency response of the sound system in place can be compensated to be pleasing and even. Notice I didn't say "flat" – a truly flat frequency response isn't really desirable in a live setting, as "flat" doesn't sound appealing to the human ear.

You can also account for acoustic issues in the space and room modes with the equalizer. Room modes are resonances that react to sound waves within the room. These usually present themselves as swells or perceived boosts in certain parts of the frequency spectrum. In many installed sound systems, you may often find two sets of graphic equalizers: one of these has been set to tune the room, and the other is used to make overall adjustments specific to the show being mixed. You'll also often find graphic equalizers used in-line on monitor mixes. These are particularly critical for "ringing out" monitors. This "ringing out" process is usually the practice of intentionally locating points of feedback at specific frequencies, and then cutting those frequencies to eliminate feedback potential. The fewer surprises during a show, the better – nobody like a surprise appearance by feedback.

Direct equalization of instruments and vocals

Your typical equalizer section on each channel strip of an analog live sound console is usually some combination of parametric, semi-parametric, or simple-shelving, filter-equalizer circuits. These often tend to be more "musical-sounding" equalizers, rather than the sometimes surgical sharpness of a graphic equalizer. And assuming your system has been set up and tuned properly, they allow you to sculpt sounds within the mix. In the live world, you'll often be working with subtractive equalization, meaning that you'll be looking to remove frequency information instead of boosting. The reason for this is because large boosts tend to raise your noise floor (often heard as hiss or rumble within a signal) or make a certain signal more prone to feedback. Using a high-pass filter on channels that don't need that lower-end information is also a common practice, as this will often eliminate "muddiness" in your mix or help clean up noise from vibrations in the stage/floor, handling noise, etc.

A lot can also be done with the equalizer and tone settings on your amplifiers and instruments. The sometimes mysterious tone knob on almost every electric guitar ever made? Nothing more than a simple high-shelf filter with a fixed-frequency point where the knob increases or decreases the effect of the filter. The controls of your amplifier are basically shelving filters, and some amps even allow you to have semi-parametric control over certain frequency ranges.

EQ can be musical and not just clinical; more and more, we see EQ used as an effect. The EDM and DJ worlds love to use filter sweeps, which is really just moving a low-pass or high-pass filter on a particular signal for dramatic effect. Many guitar stompboxes more or less play with equalization for effect as well, and wah-wah pedals and envelope filters are essentially just a series of moving EQ filters.

For more tips on getting the best live sound every time, check out more from our resident "Angry Sound Guy."