5 Best Venues in Seattle for Bands New to the Scene 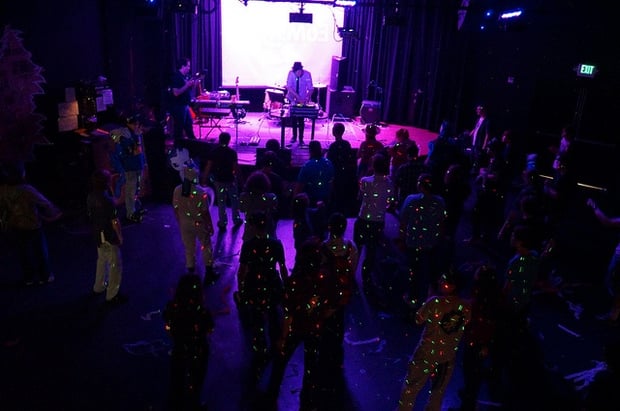 The Vera Project (Photo by David Dawes via Flickr / CC BY 2.0)

Seattle has a rich musical history, and the arts and culture scenes are incredibly vibrant to this day. It’s a wonderful environment to explore yourself musically, as there's a market and venue for almost any genre you can imagine.

There are a ton of great venues of all sizes in town, and shows happen on every night of the week. It really isn’t that difficult to find a gig! If you’re new to the scene or have just moved to the area, here are my top five recommendations for clubs to start with.

1. The Vera Project (most genres)

The Vera Project is an all-ages, volunteer-run music/arts venue that sits right at the heart of the city. It's hosted some big touring acts over the years (the Shins, Weezer, Fleet Foxes, Macklemore, etc.), but is also dedicated to growing the local scene and supporting up-and-coming acts.

The main room is a comfortable mid-sized floor, and a few bands with a modest draw can easily populate it. From time to time, it also hosts bands in its smaller lobby/art gallery space.

As an added bonus, it features awesome seasonal workshops on subjects such as live sound, concert lighting, screenprinting, DJing, and much more.

2. The Skylark Café (most genres)

The Skylark holds an important place in the market as one of the only clubs in West Seattle. The room is the perfect size: intimate enough for bands just getting started, yet large enough to host loud groups that would overwhelm most café spaces.

Between its awesome food/drink menu and its weekly karaoke and open mic nights, the venue has a dedicated group of weekly regulars that will help pad your draw as you establish yourself.

Grumpy D’s is a bit of a hidden gem. Located on the north side of Seattle’s hip Ballard neighborhood, its accessibility, parking, and high-quality food/drink attract a great community of regulars.

Dan (the owner) is surprisingly un-grumpy, and has a passion for jazz and acoustic music. If you sound good, he’ll have you back as often as you want. The room is just large enough for a small PA, and you can easily make it feel packed by dragging along a group of friends. It also has a weekly open mic night, which is a great way to introduce yourself to the Ballard scene.

If you’re in a louder rock or metal band, the Funhouse is a great place to start. After being closed for a few years, the venue has now moved inside of another favorite rock/metal club known as El Corazon (taking over what used to be its smaller room/bar).

The staff at the Funhouse are great folks, and they host a slew of great local acts all throughout the week. This is another room that sits in the happy medium of size – large enough for loud bands and a full PA, yet small enough to feel comfy once a few bands combine their respective draws.

If you’re a jazz musician with some music or a group to showcase who’s new to the scene, Egan’s is the perfect spot to break in. It’s located right in the middle of Ballard, and there's a ton of foot traffic going by on weekend evenings.

The food and drink menu are great, the ambiance is just right, and (perhaps most importantly) the space itself is tiny. Seriously, get 10 friends to come out and hear you, and it’ll feel like a packed house.

Dylan Welsh is a freelance guitarist, arranger/composer, and music educator based in Seattle, WA. He has been performing actively since 2008, and operates most frequently within Seattle’s rock, jazz, folk, and R&B/funk scenes. More info on Dylan Welsh can be found at dwelshmusic.com.