Boost Collective: Is It Worth It? 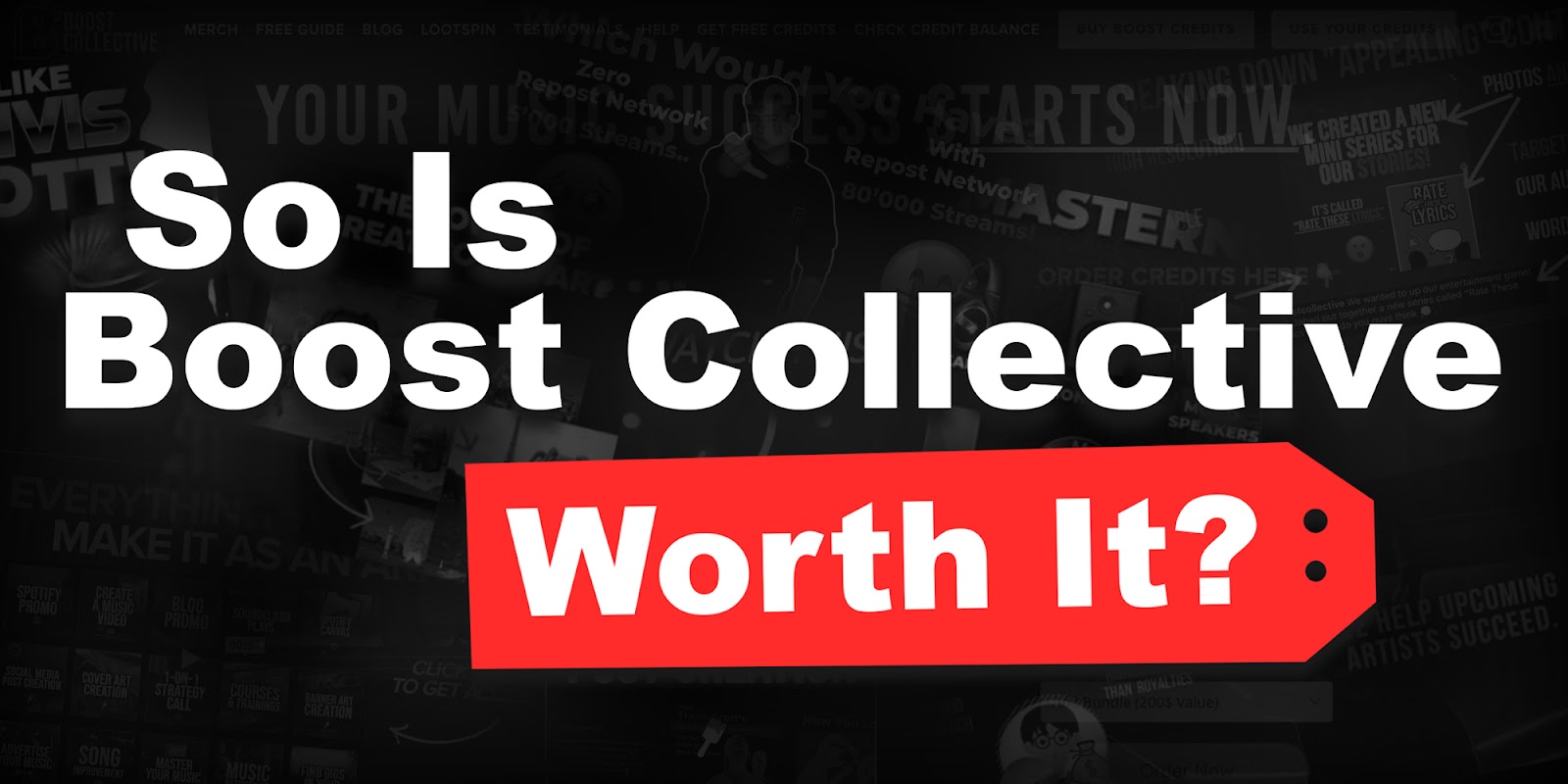 TLDR: It’s legit. Just make sure that your music is pretty good, or you’ll struggle to promote it to a large audience.

We’ve all seen an ad from Boost Collective at least once or twice.

Usually, it’s some bozo jumping and yelling about promoting your music. Is Boost Collective worth it though? I don’t want you to spend your dollars testing, so I went ahead and did it myself  - so that you don’t have to.

This deep dive is  a long read, so grab some popcorn!

See, having a team by your side is essential for growth. Even indie artists Russ himself has a team of managers, designers, etc. that help him do his work - not to mention Drake or Kanye.

Boost Collective prides themselves on being your team - to give you label-level service for indie-level prices. Not bad!

Firstly, I do have to give them props when it comes to their own branding/marketing.

Boost Collective makes music marketing (a dreadful thing) somewhat fun. Although their ad was kind of annoying, it got me to check them out so you can say that it works I guess. Much rather have them run my music ads than the other tasteless marketing firms.

Is there a method behind their apparent madness. Let’s see how good their engagement is for their social media posts. 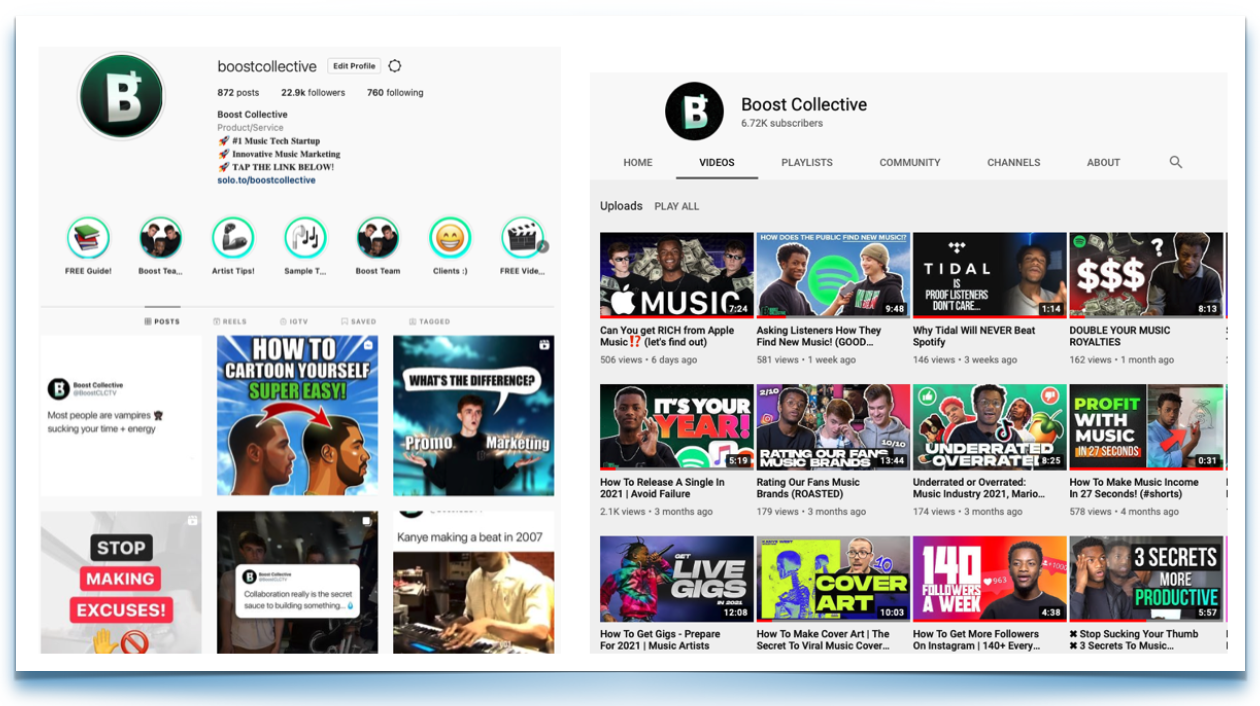 They have over 22 thousand followers! Anybody can buy bots to push their engagement up though, so how trustworthy are their numbers?

I can’t speak for you - but I won’t take marketing services from somebody who can barely market themselves.

I checked and Boost Collective passed this test. They’re marketing works, for them at least.

I used the tool Social Blade to check their authenticity.

A B- ranking is quite good for a business account, it’s proof that they have been active and their followers engage well. They do street interviews, tutorial videos as well as breakdowns - they hold their weight in the content game!

Okay but what can that do for YOU. We’re not here to worship their marketing, we're here to decide if they’re worth doing business with.

Let’s start with the most important metric for investing: pricing.

Fortunately, Boost Collective services are a far cry from being called expensive.

Particularly in the current music promotion market, where the average campaign will cost you hundreds if not thousands of dollars.

I've noticed that other services require you to pay hundreds (and sometimes even thousands) of dollars for promotion of equivalent size.

With Boost Collective's credit system, you can start your Spotify growth journey with as little as $30.00. 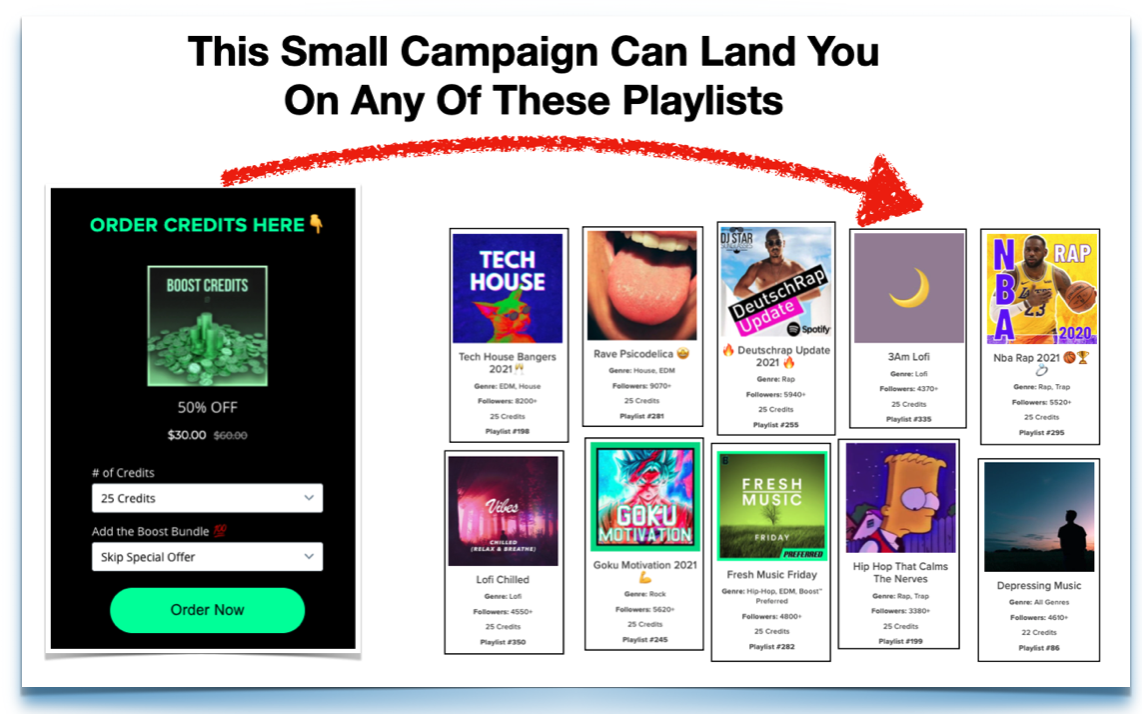 In the beginning, It can be overwhelming finding which playlists to choose from!

To make it easier, Boot Collective has a filter to single down your genre and size. This is huge, now I can select multiple playlists of different sizes to get the full effect of my campaign. 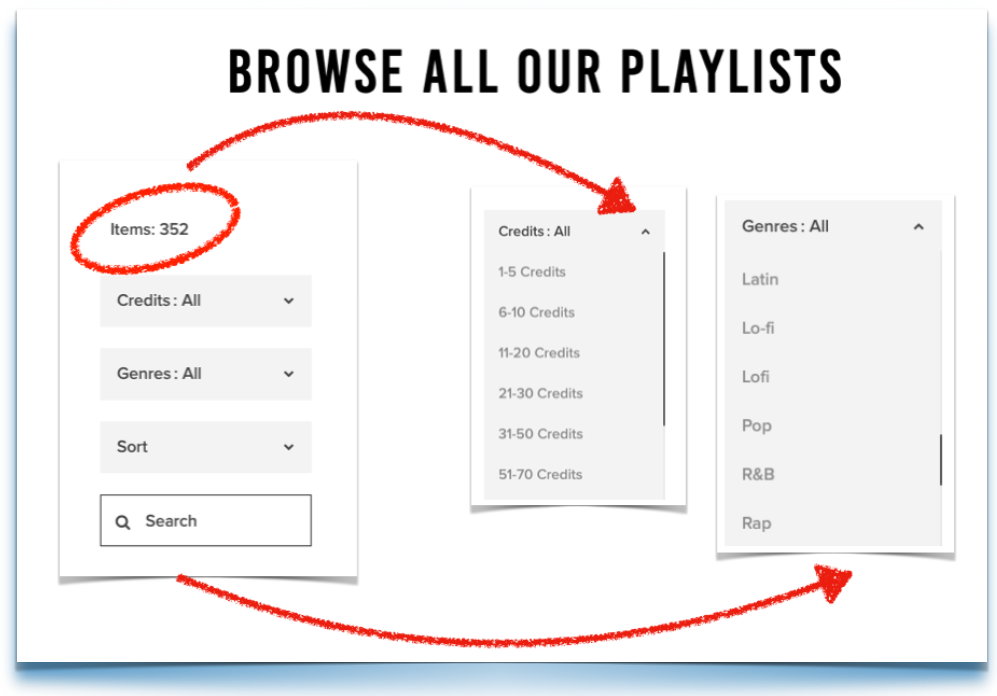 Most firms require you to pay for a campaign in advance, and offer ZERO transparency.

When I say zero I mean literally ZERO.

Being able to browse where your music is going is such a major thing! I also enjoy how I can customize which style of campaign I want.

With Boost Collective I can choose whether I want to pick my individual playlists (after browsing them for free of course) or allow the team to hand-select playlists they think my song will perform on. 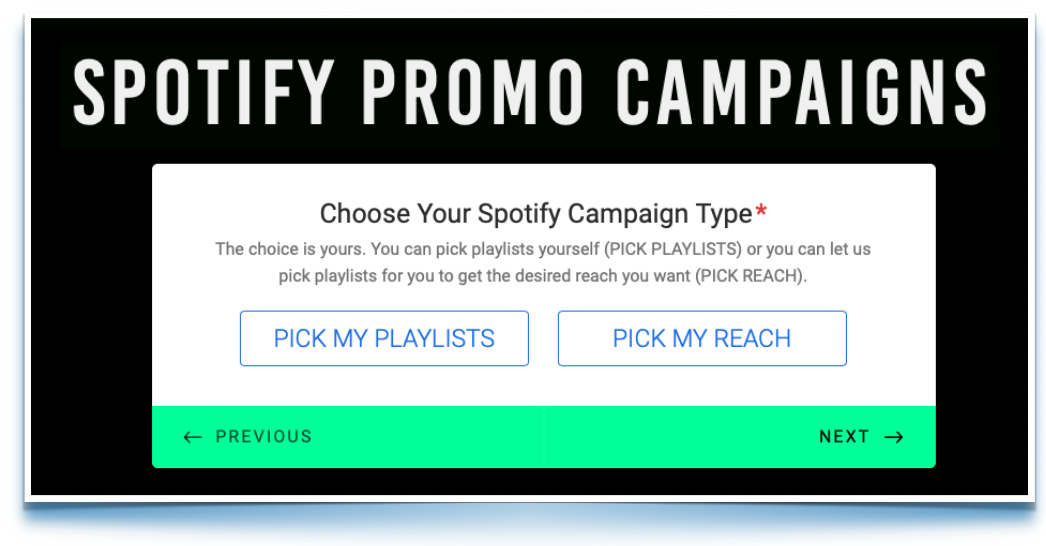 This hybrid playlist promotion method is the best of both worlds because:

When accepted or rejected (which happens from time to time) I get a nice response from the team.

Here’s something that sucks:

The curators will not keep your song on forever.

I was shocked when I first discovered this, and my sign was taken off the playlist at the 6 week mark - but it makes sense if you think about it. A listener that is looking for “new” music does not want to hear the same thing for a month.

At first, I was PISSED to find I get rejected 3 times in a row. I cooled my head, then after speaking with Jabari and the team, he explained exactly WHY I was rejected - and offered constructive feedback!

They even have a free guide that explains the 7 common reasons artists get rejected by playlist curators!

Boost Collective did something cool with the credit system.

In the beginning, I was not a fan of credits - I just wanted to directly pay for the campaign to keep things simple.

Why go through that extra step?

But then it hit me.

The credits provide a big benefit when it comes to flexibility and planning.

Obviously, we can use it for promotion but there is much more than just that. You can use the credits on any of the services they offer!

This means you can reap the benefits of having a design team along with the promotion. The flexibility aspect is great when planning a campaign, I don’t need to run around like a headless chicken looking for this thing and that. It’s all available in one place!

This is how I would personally rank the design services:

I’ll be honest, without a sick Spotify canvas… Your release is lacking.

I was hesitant to try this, mainly because I have never used a Spotify Canvas Maker before, but it turned out well! I am bummed that they didn’t have all the templates back then like they do now - but what can you do?

The canvases are 60fps, not 24fps, so it has that clean cutting-edge look that all the record label designers use.

Quality is subjective, but production isn’t, so i’m glad that the clean canvases can reflect the artists’ brands well. Kudos.

I made sure to get a Spotify canvas bundle. Since you, and many other artists plan to release a LOT more songs - it is much cheaper to bulk-order canvas services to use with every new release. Boost Collective credits do not have an expiration date, so I don't’ feel rushed to use it!

There are bundles for practically every design-related service. Why pay a designer a huge amount, when I pay a fraction of the price for the exact same quality?

I even went ahead and tried the music video visualizer task. It was pretty good - I just wish there were more options.

Personally, I don’t want to spend my time exporting and making these on adobe after effects, so it’s nice to have them readily available at my beck and call.

In my opinion, beatmakers and producers  stand to win from this as well, now they can promote their “type beats” with an awesome visualizer!

Now, what about their playlists?

How legit are they?

I took a sample of 20 of their playlists (I could have done them all, but that would have taken me hours as they have 350+ playlists that grow daily.) I ran it through a site called Chartmetric to get a good idea of their growth rates. 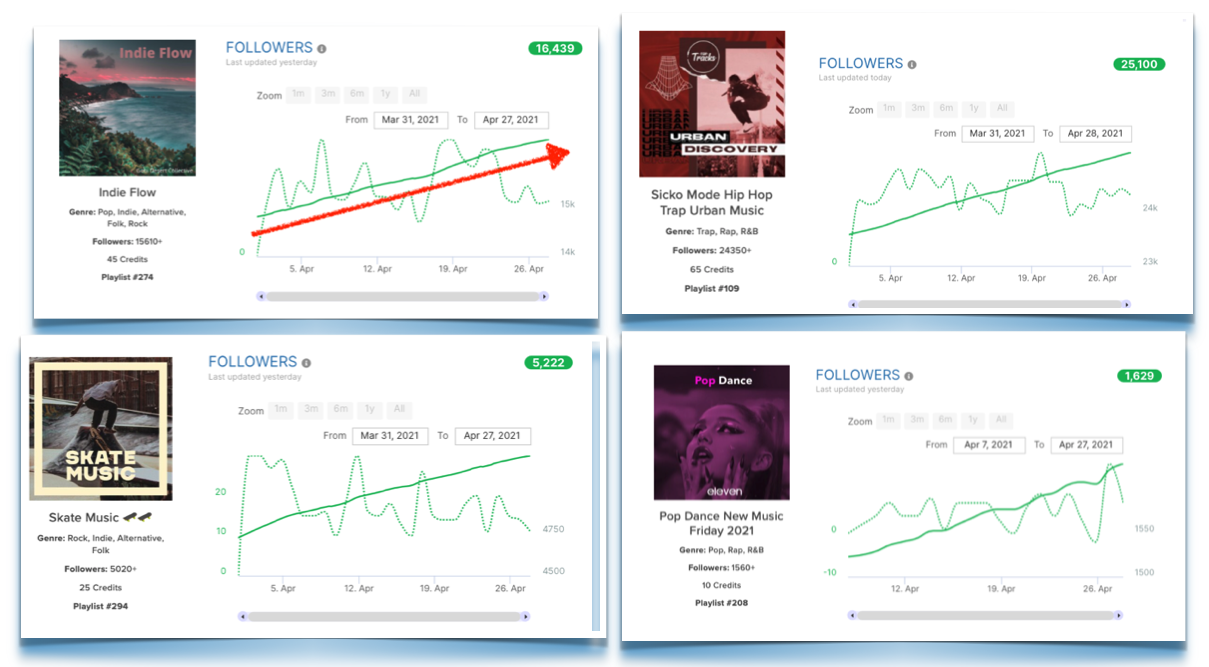 The growth rates seem to be pretty decent, I even calculated how many songs are in each playlist. I figured, if a playlist has 3000 songs then it ain’t worth a damn.

Fortunately, there does seem to be a strict curation process - especially considering the song I used to test got rejected three times haha. Touché Boost Collective, you pass this one.

What can you expect from the results though?

From my experience, playlist promotion has always been finicky. There are so many factors involved for a good release, Boost Collective ended up getting my song on their high-growth playlists top 20 slots for a solid month. Not bad!

It does suck how they don’t actually own the playlists though. Overall, I prefer using a firm like Boost Collective that ensures my success, rather than going rogue and being 100% liable if anything goes wrong!

If you look at Boost Collective as your secret solution to music success then you’re destined to fail.

Treat it as it is: a valuable tool. Not every artist will benefit from each task equally so make sure you have a good strategy and can use their services accordingly.

If you want to get started just TAP HERE.