Breaking the Band: The Orwells 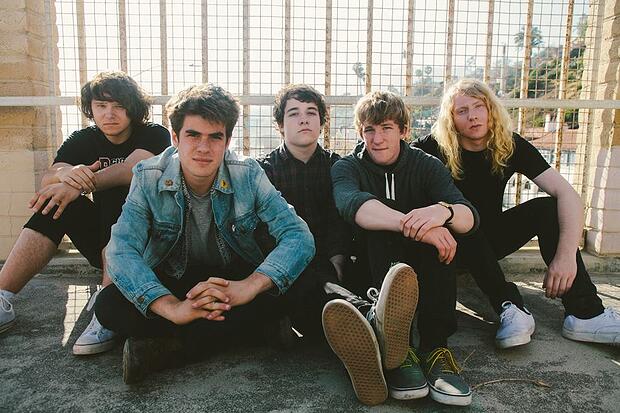 Everything is set up. The guitars and bass are tuned, the drums are mic’d up, and everything onstage is ready. Except for one thing: where’s the lead singer?

The crowd at Great Scott in Allston, MA, last Tuesday stood staring at the player-less instruments in front of them as The Orwells’ lead singer Mario Cuomo took his sweet time getting to the stage. After about 20 minutes of guitar player Matt O’Keefe and drummer Henry Brinner jamming to an improvised version of Link Wray’s “Rumble” to pass the time, the blonde-maned vocalist finally sauntered onto the short stage, grabbed the microphone, and led his band into an explosive rendition of their opener, “Other Voices.” The next hour and a half was nothing but loud, with the constant moshing of the audience perfectly complementing the band. Still young, there is no denying The Orwells have talent and poise by the truckloads.

Cuomo, though, stole the show. He performed like a man possessed, writhing on the floor, lassoing audience members with the mic cord, slapping the hanging overhead monitors with his belt, and tackling his bass player. And still, he never missed a beat and delivered an amazing vocal performance. On that stage in that dimly-lit bar, he was equal parts Iggy Pop, Jim Morrison, and Henry Rollins. Even after barreling through the majority of their recorded catalog, the band came back onstage for an incendiary rendition of the Stooges’ “I Wanna Be Your Dog,” and devolved into a mass of bodies, with Cuomo at the bottom, all swarming Great Scott’s stage.

After a performance on Letterman, the somewhat-known band from the suburbs of Chicago was immediately thrust into the national spotlight.

How, in today’s technology-fueled world – where practically every song is just a mouse click away and instant gratification seems to be the name of the game across the board – does an audience still feel gratitude for a band that came to the stage late? This isn’t any kind of damnation of The Orwells – they played an amazing set. But how can a band command that much love and attention? (It wasn’t just college kids at this show, either. There were plenty of middle-aged folks there getting in on the action.)

There appears to be a shift occurring, combatting the arena-size shows and huge production arrays of superstars. There is a shift back to the lo-fi, back to the garage, back to the primal roots of not just rock ‘n’ roll, but music in general.

All it takes is one big break, one record, one proverbial domino to fall, and all of a sudden it opens the floodgates.

In January, The Orwells performed their single “Who Needs You” on the Late Show With David Letterman. Letterman. In what may be one of the most polarizing performances on the Late Show that I’ve seen in recent memory, a somewhat-known band from the suburbs of Chicago was immediately thrust into the national spotlight. Prior to that gig, they had done well, touring clubs around the country and playing Lollapalooza. But they hadn’t broken yet. That performance put them, no matter what the opinion, in the spotlight. It led them to a tour opening for UK giants the Arctic Monkeys, and now the band is on their own headlining tour.


And it isn’t just The Orwells. Over the last decade or so, there has been a definite shift in the zeitgeist of popular culture and music – most of all, in quickly elevating artists who are characterized as “indie.” Bands like Wavves, as well as hip-hop artists like Earl Sweatshirt and Chance the Rapper, receive so much more hype nowadays than they would have years ago.

It’s not a particularly tough sell. Even while the arena-fillers continue their world tours, there will be those smaller bands that make enough waves to ruffle a few feathers, getting just enough hype to make a break. I’ll stop before I use any more metaphors and clichés – but if The Orwells are any indication, the indie artist is here to stay.