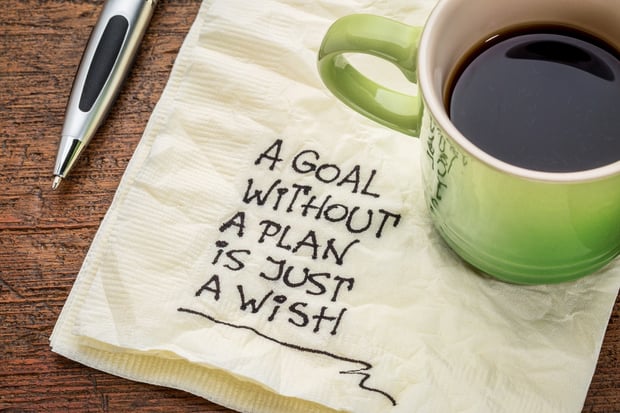 Are you looking towards the end of 2016 and wondering why you didn’t achieve more? Why didn’t your band get signed to a label? Why didn’t you get added to a major music festival? Why didn’t more fans support your music?

When you look at goals from a large-scale point of view and evaluate how you did on your quest to achieve them, it’s easy to get discouraged. It’s easy to say, “What’s the point anyway?” Big-picture goals are fantastic and it’s important to dream big, but sometimes you need to take a step back to look at ways to create forward momentum.

With the coming year around the corner, now's the time to reflect and plan your goals for 2017. Start with these five points.

1. Get real about where you currently stand

Maybe you’re an artist who just released your debut record and hoped to have it picked up by an indie label. You need to start by asking yourself whether that's a realistic goal at this point.

What’s the success rate of other bands achieving that goal? Could you realistically accomplish it in the time frame you hope? Be honest with yourself about your current status before setting pie-in-the-sky goals.

We do this when starting our publicity campaigns at Green Light Go Music PR. We take stock of the selling points the band has and what we can do to help take them to the next level.

If they're at ground zero, we need to look at whether we can sell them based on the music alone or the story they can tell, questions that you should ask yourself, too.

Now that you’ve identified your assets, it’s time to look at what you can achieve based on where you stand and what you have going for you. If you want to play a major festival but don’t have a lot of fans or enough experience playing in front of a big audience yet, then look at smaller festivals that are more open to bands at your level.

If you want to be covered by Stereogum, but have no press coverage to date, look at blogs dedicated to discovering new bands. You can find these on both a big and a small scale. You're going to have to be ultra realistic about why someone would want to support your band in order to be realistic about what you can achieve at this stage.

Now, look at what you hope to achieve on a weekly basis. When you micro target your goals and make them more achievable, you tend to be smarter about your approach.

Although counterproductive to casting a wide net, you'll probably achieve more in the long run by doing less and only focusing on what has the greatest chance of success.

By making my goals achievable, you're also more apt to create momentum from successes. Every day, take one first step toward your weekly goal until you’ve achieved it.

At the end of the week, evaluate whether you achieved your goal. If you’ve achieved the goal, make a list of three reasons why. If you haven’t, look at three reasons why you didn’t and one step you can take to improve it in the next week.

To dream big, you need to start small. The greatest successes are often made by small, smart steps.

Next up:  How to Set Achievable Goals for Your Music Career