Do Your Live Shows Get Rowdy? How to Protect Yourself, Your Fans, and Avoid a Lawsuit 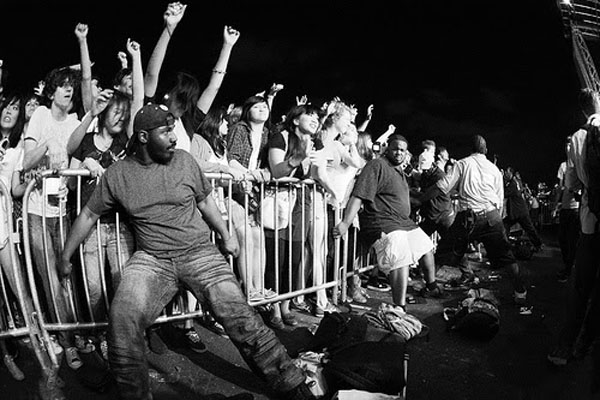 Disclaimer: The information contained in this column is general legal information only and should not be taken as a comprehensive guide to copyright law. Consult your attorney for all specific considerations.

The same elements that make for a great show can sometimes turn against you. The combination of large crowds, loud music, dancing, booze, and a host of other elements are often a breeding ground for injury and personal liability. Whether it's a fight, a fall, a stumble, or a combination of all three, you'll want to make sure you're protected when accidents happen. If a problem arises, how do you know whether it's your "fault," and what you can do to protect yourself against a lawsuit? Let's dive into negligence, insurance, and playing live.

When you should have known better or could have done something about it, it's generally called "negligence," and you could be liable for someone else's injury. The term isn't as clear-cut as you might think, however. Nolo's Plain English Law Dictionary defines negligence as:

Failure to exercise the care toward others that a reasonable or prudent person would use in the same circumstances, or taking action that such a reasonable person would not, resulting in unintentional harm to another. Negligence forms a common basis for civil litigation, with plaintiffs suing for damages based on a variety of injuries, from physical or property damage to business errors and miscalculations. The injured party (plaintiff) must prove:

1. that the allegedly negligent defendant had a duty to the injured party or to the general public

2. that the defendant’s action (or failure to act) was not what a reasonably prudent person would have done

3. that the damages were directly ("proximately") caused by the negligence.

An added factor in the formula for determining negligence is whether the damages were "reasonably foreseeable" at the time of the alleged carelessness.

While the test for negligence surrounds particular facts and circumstances, you should evaluate your act (and your venue) to determine what preventative measures you could take to stop a problem before it happens. Does your band have fans who jump off the stage into the crowd? You should get security as a barrier to the stage. Do you have a lot of minors at your show? Check IDs at the door and at the bar. Does your band light off pyrotechnics during the show? Stop doing that. You get the point.

When someone is hurt at a concert, they'll often seek money to cover their medical bills and expenses related to the injury. Many times, this will come in the form of a lawsuit. Most popular venues will have insurance that covers people who might be injured during the course of a gig. If you're signing an agreement with a venue, find out whether they carry insurance. If they do, this should be contained in the contract. In the event that someone is injured and it turns out that the club doesn't have insurance, you could have a cause of action against them based upon the contract.

During the past few years, however, insurance companies have been cracking down on live venues. This has a trickle-down effect on performers. Some insurance companies are requiring insured venues to have live bands provide their own insurance and liability waivers. Live performance insurance can include liability for personal injury and property damage and can be bought on an annual or per event basis. For smaller venues, policies covering between $1,000,000 and $2,000,000 should be more than sufficient (premiums are less expensive than it sounds). Again, oftentimes a venue contract will specify what policy limits are required and demand to see proof of insurance. If audience members, equipment, or you are injured during the course of the performance, club policy and party coverage will determine responsibilities and payout.

The good news is if you have insurance or get sued, and the injury is covered under your policy, your insurance will take care of the legal expense in defending the suit. There's a specialty in the field known as "insurance defense," and the company will cough up any resulting damages from the suit.

When in doubt, take it upon yourself to get covered. So what's the best way to get insurance? First, try exploring online options. New York-based MusicPro Insurance has an informative and user-friendly website that makes insurance selection easy. You'll need basic information to get started, including tour itinerary (dates, venue, and venue capacity), transportation details, payroll information (if requesting workers' compensation), and your band's federal ID (if it's an LLC or a corporation). After filling in the required criteria, you'll be issued a quote.

Better to take care of this sooner rather than later – your band, gear, and wallet will thank you in the event that you actually need to use it.

Need more advice? Consider hiring a music lawyer. Here's how to find one.

Adam Barnosky is a practicing attorney and writer specializing in entertainment law and business development. He has worked with musicians, actors, and playwrights in Boston and New York City. Follow him on Twitter @adambarnosky.