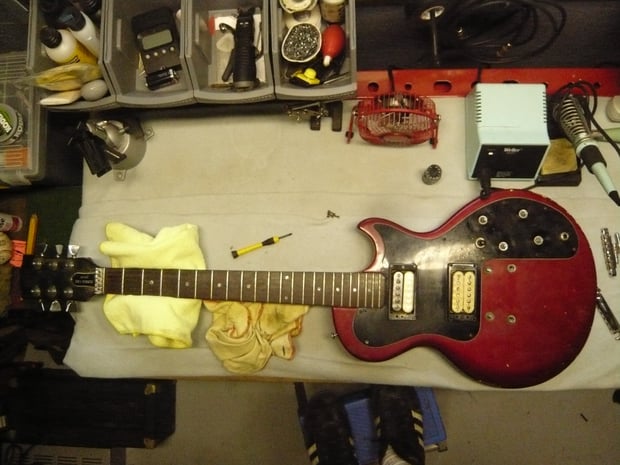 There are plenty of instruments more fragile than the guitar – the violin, for instance. But nobody leaves his or her violin leaned up against the concrete wall of a practice space or on a couch in a dark room for a housemate to sit on.

Guitars lend themselves to spontaneity, and as such, they take a beating. Not only are they nearly as easy to break as a violin, they’re also bigger targets. If somebody stumbles through a room with a guitar, they’re almost guaranteed to step on the neck, sit on the headstock, or trip over the cord. To make matters worse, guitars also develop problems from humidity and just being played.

Fortunately, there are very few guitar problems that can’t be fixed at home with simple tools. But the solutions are not always obvious. This week, I stood in a room full of broken guitars with Don Trenner, a virtuoso guitarist, fix-it guru, and owner of so many instruments that he recently sold 20 guitars just to clear some space in his music room. Here are some of the patients we examined and the repair prescriptions.

1. Acoustic guitar with the pickguard peeling off

These pickguards are sometimes attached using a weak adhesive, and that’s a good thing. Under normal circumstances, there’s nothing trying to pull them off, and you don’t want to have to use brute force or nasty solvents on a guitar. Once the pickguard starts pulling away from the guitar, don’t try to glue it back down; peel it off the rest of the way very carefully. But don’t throw it away!

Once the old pickguard is off, check the perimeter of the area where it was attached and see if there’s any built-up adhesive. You can rub off the excess using the gentlest possible abrasive (a good general practice with guitar repair, starting slowly). In this case, try the green side of a scrubby sponge. It’s okay to use a very small amount of water to help the process, as long as you remove it from the body of the guitar right away. If the scrubby doesn’t quite get it, wrap a strip of very fine sandpaper around your finger and rub gently, being careful not to scuff the finish on the guitar’s top.

Once the area is ready, you can attach a new pickguard. Generally, you can order the exact same pickguard for your guitar, saving a lot of headaches. Often, it'll have an adhesive backing and will be machined to fit.

If your guitar is an oddball and you can’t get the original, you might have to fabricate your own using the discarded one as a stencil. Use a blank sheet of pickguard material and cut with a good pair of scissors – very carefully. Then glue it onto the guitar with rubber cement.

If you tune your guitar up, but the notes on the 12th fret, one octave up, are out of tune, then you have a problem with your intonation. Using an electronic tuner or a phone app like Guitar Tuna, you can check the open string against the octave and make sure both are in tune.

If there's a problem, start simple: check the saddles. The saddles, where each string rests at the bridge, usually have adjustments for both height and length. A very small hex key can be used to adjust the saddle height, with each saddle generally having two hex nuts to raise or lower the action. On the back side of the saddles is a Phillips head screw that draws the saddles forward and back, essentially changing the length of the string.

If the strings with bad intonation have funny saddle adjustments (for instance, much higher or longer than the other strings), you can make those changes easily with a tiny hex key and a Phillips head screwdriver. Loosen, but don't remove, all of your strings.

To avoid slipping tools and a gouged finish, work on a flat surface in very good lighting, and place some sort of cloth over the body of the guitar in case a tool strikes your paint job. When you’re done, tune up and recheck the intonation with your tuner.

Still out of tune?

Your action could be too high in general. Loosen all of your strings once again, and raise all of your strings using that saddle adjustment (I know this sounds counterintuitive). Then, very carefully adjust your truss rod, the metal rod that projects through the neck of the guitar. Many guitarists have been told never to touch that thing, but you can correct lots of problems with careful, incremental adjustments.

Most truss rods have a Phillips head adjustment at the headstock (sometimes hidden under a plate which you can remove by unscrewing two or three screws). With the strings still loose, reduce the tension on the truss rod by turning it counterclockwise – a quarter turn at most, for starters.

Never make radical adjustments to truss rods. Make tiny adjustments, tune up the instrument, and check your progress. Your action should now be lower and your intonation improved. But be prepared to repeat this process a couple more times to completely solve the problem.

3. High E string jumping out of the nut

When a string refuses to stay in its slot in the nut (or if the nut is muting the string in some way), then it’s time to clean up and/or deepen those slots. This is another process that calls for great care, since nuts are easily cracked, and you’ll need a whole new one if you break it.

To clean up a slot, or to make one deeper, you can use a square of fine-grit sandpaper like a saw. Remove the strings and slide a sock with the toes cut off over the headstock of the guitar, pulling it down so it protects the neck where you’ll be working. A rag or polish cloth wrapped around the neck works, too.

Fit the sandpaper into the bad slot and saw back and forth lightly for just a few strokes. As with most of these repairs, restring and test frequently, and be prepared to repeat. It’s better to do too little than go overboard and break something.

Need to replace the nut?

If a nut is no good and has to be replaced, tap it out from the side by holding a screwdriver against the nut and gently striking the driver with a hammer. Keep the old nut as a template, and machine new slots to match. You can create slots using the sandpaper trick for the higher G, B, and E strings. For the wound strings, use a length of each string in question to make the slots, sawing away at the nut with a length of that string.

4. Guitar that won't stay in tune

Assuming your guitar has proper intonation, but strings keep slipping out of tune, the first thing to check is the player. Are you doing tons of radical note-bends, or going crazy with a whammy bar? If you’re a really aggressive player, it might be time to invest in a heavier duty tremolo system and top-quality tuning pegs. But if you’re a gentler player, check the nut first for any sharp or jagged spots where a string could get caught up.

Strings often get caught in the nut, and then when they suddenly release, the guitar goes out of tune. Having one string that’s way off tends to pull the other strings out as well. With the strings removed, lubricate the slots in the nut with graphite, also known as the lead in pencils. For the larger slots, you can just write inside the slot with a pencil, but for the narrower ones, just blacken a small piece of paper and rub that all over the inside of the slot. Restring and see how the instrument holds its tune now.

Move onto the tuning pegs. Their tightness is controlled by a small screw at the end of each peg. Remove the strings. If one or more of these pegs is spinning very freely without a string attached, tighten those pegs up so that there’s at least a little resistance when you turn them.

Restring and check again. If you’re still out, then it’s time to think about replacing your tuning machines with better ones. That’s going to cost you at least $40, so if your guitar cost you less than $100, it might be time to upgrade the whole guitar.

Next up: The 5 Tools You Need to Care for Your Electric Guitar or Bass