Fundamentals of Guitar Anatomy: A Quick Guide to Body Styles 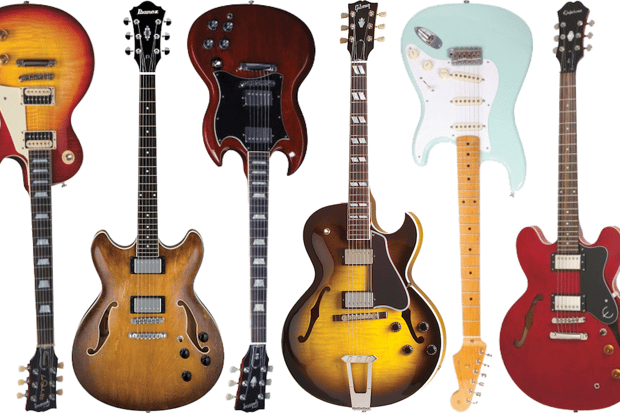 Welcome to the Fundamentals of Guitar Anatomy. This is a four-part lecture, so take your seats, bust out your axe, and grab a magnifying glass, because we're going to examine all the ways your guitar's sound can take shape through design and hardware. (If you're ready for next-level sound sculpting, try adding some pedals).

First, I'd like to break down all of the most common body styles of electric guitars and talk about their very noticeable differences.

There are many, many variations of the electric guitar. Science has told us that in order for sound to be naturally amplified, there needs to be a chamber in which sound can resonate. Just look at the construction of the ancient amphitheaters, or the way that the human body has natural resonating chambers that allow us to use our voices, or a stand-up bass with its large, chambered body designed to amplify the resonating strings.

Then, our friend technology came along and told us that even with the resonating chambers that we had designed for our instruments, they could sound even bigger! With the addition of electronic amplification, the guitar no longer needed chambering in order to be heard.

From its humble beginnings as an experiment in resonance to the flagship image of rock 'n' roll, the electric guitar has taken many forms over the years. All of them have their advantages – and their disadvantages. Every manufacturer has tried its own take on some of the different body styles, which include hollow body, semi-hollow body, fully solid body electric, and even acoustic electrics. Here, we'll take a look at what exactly those terms mean and what to look for in each.

The original electric guitars were hollow. Well, scratch that – the original electric Spanish guitars were hollow (stick with us for the third installment of "Fundamentals of Guitar Anatomy" on pickups. The first pickup was made for a lap steel guitar!) Gibson took the words Electric Spanish and turned them into an acronym – ES. We commonly refer to these as hollow-body guitars.

Nowadays, hollow-body guitars are primarily favored by jazz guitarists for their big, warm sound. Hollow bodies hardly need anything between the guitar and the amp to sound full, but there are always exceptions and examples of people using them outside of their typical application.

For example, Pat Metheny took his Gibson ES-175 and ran it through some lush chorus, delays, and compression to create his signature jazz sound. On the flip side, John McLaughlin plugged his guitar into a Marshall stack for the wild rock tones heard on records with the Tony Williams Lifetime and Miles Davis. In fact, Joe Perry of Aerosmith plays a Gretsch Falcon. The hardest thing to do when playing a hollow-body guitar through a loud amp, or a hollow body with a dollop of distortion, is not to get bowled over with feedback. Either way, these guitars are celebrated for their big, full sounds and can be applied to many musical situations.

Solid-body guitars were the next step in guitar development, with Leo Fender creating a modest instrument called the Broadcaster, which was then rebranded as the Telecaster. The Stratocaster came later and, in addition to the changes in the pickups, included contours in the body that made the guitar more streamlined and easier to play while standing up. Today, the Stratocaster is still the most iconic electric guitar shape; it's associated with guitar wizard Jimi Hendrix, and many beginners end up with a Stratocaster-style guitar. Gibson introduced their own line of solid-body guitars, the considerably swankier Les Paul.

The primary difference in tone between the solid body and hollow body guitar is the high-end bite one associates with the solid-body guitar. From the biting rhythm of guitarist Nile Rodgers to the supersonic leads of Eric Clapton and David Gilmour, Stratocasters have found favor with so many guitarists because of their versatility and their timeless tone.

But what about the Les Paul devotees like Jimmy Page, Zakk Wylde, and Bob Marley? Is it possible that the Les Paul is as enduring and adaptable as the Strat? Um… yes! Each guitar style has its own rich history of players and possibilities, and with a powerful imagination, anything is possible. Solid-body guitars are truly the dominant species of electric guitars for their overall versatility, ability to interact with pedals and amps, and general lack of fussiness.

The final pillar in the temple of electric guitar production is the semi-hollow guitar. Just as the name suggests, these guitars do have some chambering in the body, but they aren't completely hollow. In an ideal world, a semi-hollow guitar will have the biting, singing tone of a solid body guitar, but can also achieve the same smooth fullness of a solid body. However, that simply isn't the reality for many semi-hollow bodies.

Semi-hollow guitars can be seen in the hands of many guitarists who have especially signature sounds. For example, John Scofield has been playing the same Ibanez AS-200 since 1981! Larry Carlton helped define the sound of the '70s as one of the top call session guitarists of all time and did it with his Gibson ES-335 (in fact, Carlton is known as Mr. 335). John Lennon, Gary Clark Jr., Jack White, Dave Grohl – guitar titans past and present use semi-hollow guitars.

There have been plenty of attempts at different types of semi-hollow guitars from nearly every guitar manufacturer, and some are more successful than others. In my experience, even though Gibson does offer a fairly consistent output, there's still a fair amount of discrepancy from one instrument to the next, and, as always, I recommend playing a guitar before passing any judgment on it. But try and be discerning in your assessment of the guitar – versatility is king, only capable of being knocked off the throne by an absolutely golden, irreplaceable tone. Trust your ears!

While the acoustic-electric guitar isn't actually its own body type – it's simply an acoustic guitar with electric pickups to amplify its signal (we'll talk about pickups soon!) – it's worth mentioning that you're almost never going to get a comparable tone to that of a hollow body, or really, any kind of electric guitar. It’s just not built for that, and in fact, it's almost always better if you want that acoustic sound to buy a really resonant acoustic guitar and add a nice soundhole pickup (like this one) instead.

Because any acoustic guitar can be made into an acoustic-electric, from what I've seen – and this is simply an observation, not a blanket statement – most of these sacrifice both quality of guitar and quality of pickup to sell affordable instruments in the name of convenience. So for the introductory acoustic player, here is my advice: skip the acoustic-electric section and find a plain ol' acoustic guitar that you like. When the time is right, plenty of companies make a variety of pickups designed for acoustic guitars, which will give you more options when selecting a method of amplifying your acoustic.