Get the Guitar Sound You Want: Cheat Sheet for Distortion Effects 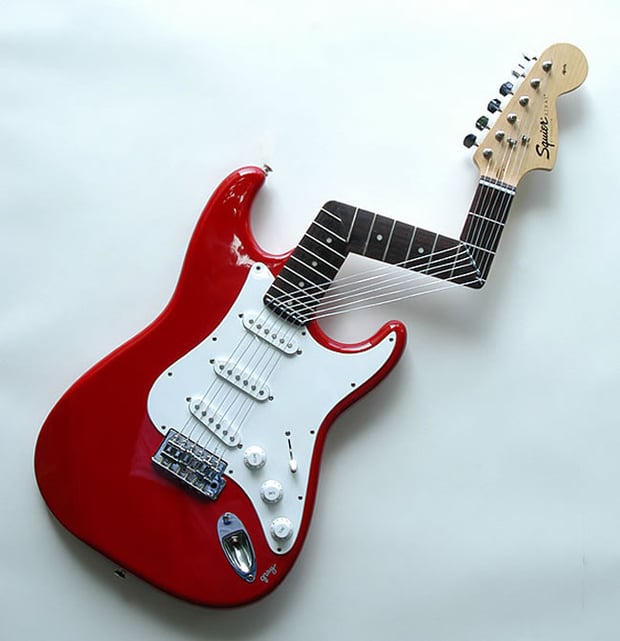 Distortion-based effects are easily the most common effects out there for guitar. Experimentation with these sounds can be traced as far back as the late 1940s, when swing and blues guitarists began to switch out their original pickups for lap-steel pickups and smaller amps for a dirtier sound. Such experimentation continued through the '50s as guitarists began to get a grasp on how this effect could be better controlled, and its continued development became essential to the growing popularity of rock music. Today, the sound can be found in a variety of different settings across many genres.

While distortion-based effects generally are emulations of the overdriven sound of a pushed tube amp, they can be achieved in a variety of ways, including analog effects pedals and digital effects processors. Some people prefer to get all of their distortion from their amp, while others go for the cleanest amp sound they can get, enabling them to sculpt their sound entirely with their pedals instead. As amp-modeling technology develops, guitarists are now also able to imitate various amp sounds digitally with modeling units like the Fractal Audio Axe-FX or the Kemper Profiler.

However you choose to get your sound, here are a few different kinds of distortions and how they can be incorporated into your playing.

Though they can be used interchangeably, the terms "overdrive" and "distortion" are typically used to refer to two tiers of the same effect. Overdrive is considered to be the milder of the two, although its saturated sound and dynamic reactivity give it a variety of different uses.

Overdrive pedals are typically reactive to the amount of signal they receive via the input. The result of this is that lighter playing will give you a cleaner sound, whereas when you begin to strum harder, you get closer and closer to full-on distortion territory. This is extremely useful for both rhythm and lead players who want to incorporate a variety of dynamics into various sections of their music.

If you feel that your lead tone uses too much distortion or feels too harsh, you may want to consider giving this a try. Have your amp a little overdriven to a slight crunch so that it's just on the edge of breakup, and then use your overdrive pedal as a saturated boost to push it over the edge. This gives you the sustain and volume boost you need, but with more clarity, and eliminates that harshness you get with heavily distorted lead tones.

Shnobel Tone demonstrates the legendary Klon Centaur overdrive pedal. The Centaur was one of the first boutique overdrive pedals and has become something of a collector's item, selling for as high as $3,000.

Distortion tends to describe a much more heavily compressed sound that becomes less dynamic as more distortion is added. Hard rock and heavy metal, in particular, have evolved around this sound, giving rhythmic playing and strong riff writing more importance over dynamics. This is considered to be one of the most popular lines of guitar effects in production today.

Higher gain distortions are going to naturally feed back at higher volumes. Learning to control this can lead to some very interesting harmonic sustains, not unlike the sound of an ebow. Generally speaking, the lower half of the guitar's range tends to sustain into more favorable feedback that's easier to control, because the available harmonics generated by notes in this range will resonate more easily and sound less dissonant.

As the amount of distortion in your sound increases, the muddier those full chords you may be used to are going to begin to sound. Major and minor thirds begin to sound dissonant, while the fifths that usually sound more hollow on cleaner settings tend to sound thicker and fuller. Adjust your rhythm playing accordingly for a stronger, more powerful sound.

Fuzz is a particular type of distortion that actually originated from the use of malfunctioning equipment. One of the first examples of this sound is the song "Rocket 88" by Jackie Brenston and his Delta Cats. Allegedly, the guitar sound in this recording came from a damaged amplifier that was stuffed with newspaper to hold the speaker cone in place. This sound became more popular throughout the '50s and '60s with songs like "Satisfaction" by the Rolling Stones. This unique brand of distortion is utilized today in many forms.

When the Rolling Stones recorded "Satisfaction," they had originally recorded the fuzz guitar track as a placeholder for later adding horns for the song. While chances of you tricking anyone into thinking your guitar is a saxophone are pretty slim, fuzz distortion's rounded attack, lasting sustain, and unusual harmonic content makes the effect ideal for adding unique character to your leads and riffs. This technique is also frequently used by more modern bands such as Queens of the Stone Age, the White Stripes, and Muse.

While some players like fuzz for its unique tonal quality, others prefer to make use of its trashy breakup and utilize it as a more extreme version of overdrive distortion. Jimi Hendrix used this sound quite frequently through his career. If you're someone who likes to inject a bit of controlled chaos in your playing, this is definitely a sound you're going to want to check out.

An excerpt of Jimi Hendrix's "Machine Gun" live at the Fillmore East on New Years Eve, 1969. Hendrix often favored this fuzzface/univibe combination when performing with the Band of Gypsies.