How to Use Music to Get You Through Financial Hardship: Advice From Supa Soop 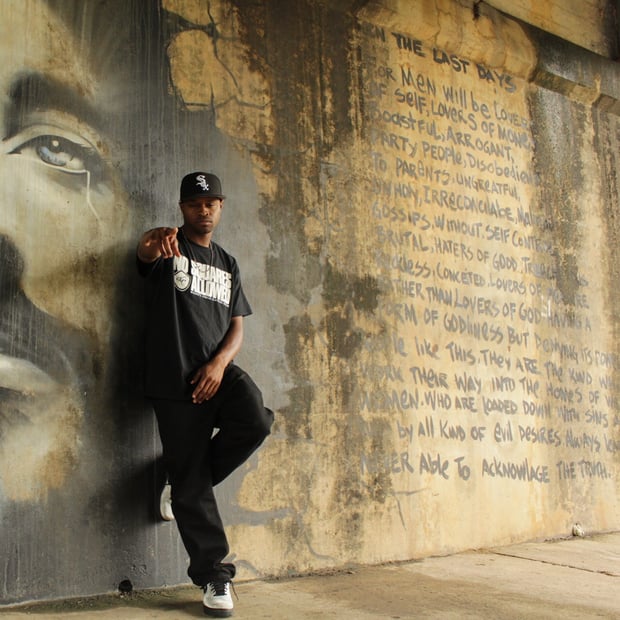 When falling on hard times, we often prioritize our most lucrative opportunities. For some, that might mean picking up shifts at the local bar or succumbing to a job we might not like – or worse, engaging in illegal activity such as drug dealing.

It's already hard enough to make a substantial profit from being an independent musician, but depending on music while you're falling short on money takes serious dedication. Richmond, VA-based rapper Supa Soop felt the weight of his family struggling to pay the bills, but instead of turning away from his passion for music, he embraced it. We caught up with Supa Soop to learn about how music helped keep him afloat during hard times, how he was able to make a profit, and what keeps him motivated to stay focused on music.

You were born in Cleveland, but you moved to Richmond, VA, where you began to take rapping seriously. This all happened shortly after losing your father. How did music help you cope with your loss?

Music helped me express myself and also helped me find myself. After losing my father at a young age, I couldn't explain the way I felt to people comfortably without breaking down. Once I started writing the words down, they became poems, which eventually turned into songs, and it allowed me to put all my feelings and emotions on the page and let go.

[How to Rise From Personal Tragedy Through Songwriting]

You've mentioned that when your family fell on tough times, you used your music to provide for your loved ones. Some people might think of giving up on music and turning to a more "stable" job. What made you decide to stay focused on making music your career?

Don't get me wrong, I still have a job, but it's hard out here, especially for someone like me with no college degree. I looked at the pros and cons of things, and there were many times I contemplated engaging in criminal activities to provide, but I realized the long-term effect wasn't promising.

I remember in high school there being times I didn't have enough money to even purchase a meal for lunch, and that's when I decided to buckle down, do some number crunching, and take the little money I had left over to buy CDs, burn them, and during class changes I approached people and hustled!

Sometimes I'd come home with money to help my mom out and do something nice, sometimes I didn't, but I knew every time I was working toward something. I eventually started to see the progression along with positive feedback, so it kept me going, and that's why I'm still in it. Shout-out to my supporters!

Tell us about how you were able to keep your family supported with music. What were some of the more profitable revenue streams that helped you regain financial stability?

Merchandise, touring, and keeping in contact with your supporters. The music is great, but anybody who can access the internet can get music for free these days, so you have to come up with something that represents you and what you stand for that other people can relate to.

If they are listening to your music, they will take interest in your merchandise if it represents you, because your support system, nine times out of 10, are people who can relate to the things you have been through. The music promotes the merchandise and the shows, and vice versa.

Once I found a way to touch people in different cities and other markets, I made sure I got contact information from them so I could keep them informed on what's going on with me. By doing that, I realized people are more than willing to support you if they believe in you, but it's up to you to find them and give them a chance to.

Were there ever moments where you thought, "Maybe I should do something else to bring in money faster?" How did you overcome those thoughts and keep pushing your music?

Absolutely. Self-doubt set in when I saw some of my peers graduating college, getting good jobs, and progressing in life with careers that they either went to school for or pursued as an adult. Most of the time I would talk to them, they would tell me they hated what they did for a living, and that's what kept me going. I just always wanted true freedom in life, and the only way I felt like I could obtain that is by doing something I love to do for a living.

One thing people don’t tell you about falling on hard times is that besides worrying that you don’t have enough money, you also get down on yourself. How did music help you and your family stay inspired, even during the bleakest of times?

When things are tough and you have nothing, and you get a message from that person who bought a ticket to your show, or you see someone that recognizes you while you're out, or that person posts a status telling their friends how much they enjoy your music, that is what kept us from giving up. My supporters are very important to us because they keep us motivated, and make us realize that what we are doing is getting someone through their day or putting a smile on their face.

You’ve gone on to accomplish impressive things in your rap career, from signing to Smooth Dirty Productions to sharing the stage with Method Man. How does it feel now, looking back on your humble beginnings?

It feels good now. I'm touring, people are buying music and merchandise. I remember times I felt like I wasn't getting any shows and I was wasting my money. It makes all the days I had to struggle all worth it, and it also makes me appreciate it more.

If you were speaking with an aspiring artist who's struggling to keep food on the table, what advice would you give him or her to keep pursuing music and find a path to financial stability?

I would encourage them to do research, read success stories and interviews (preferably Ryan Leslie), and be yourself. There is a whole world out there looking for someone exactly like you. If you give up, you will never reach them, but if you stay consistent and persistent, you will find them or they will find you, and you will make it through the adversity.