How to Get a More Robust and Responsive Piano Tone 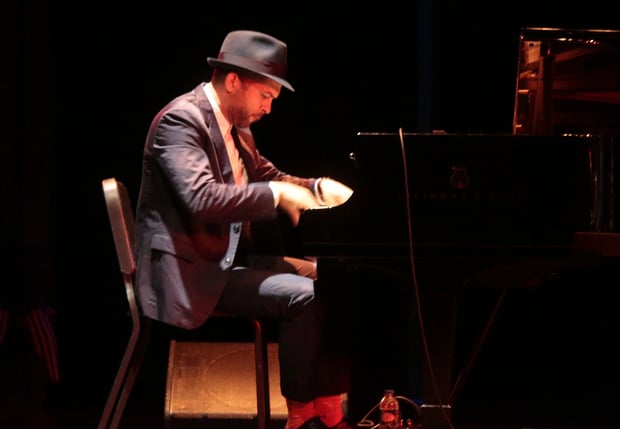 We’ve discussed unique exercises to increase dexterity while playing piano, and now we’d like to extend our best tips on creating the best piano tone. Contrary to popular belief, piano is an extremely sensitive and dynamic instrument. Due to its size, the potential for booming triple fortés is expansive, as well as the prospect of barely whispered attacks. We’ll cover ways to hack science and utilize momentum and inertia to generate the most responsive piano sounds.

It’s an inevitable force acting on everything in the world! You want to control the use of gravity in stabilizing your attacks so you can extend the dynamic range of your performances. Simply put, the higher your hands are from the keys, the more time gravity has to increase your hand’s velocity. However, since the natural forces in the world are acting to shape your tone, you have less control over the hammers. Refrain from bring your hands higher and higher to increase your louds, and practice training your muscles to build up tension so you can produce a huge sound starting with your fingers resting on the keys.

The shoulder muscles join forces with the wrist, hand, and arm muscles to create tension and affect the inertia as your hands "fall." While it’s important to relax your muscles while you play, experiment contracting your muscles at the moment just before your attacks, relaxing them the moment you depress any keys in order to produce a controlled velocity that’s determined partially by gravity. The acceleration of the key determines the acceleration of the hammers.

Keep in mind that switching between grand and upright pianos can vastly affect the way this action works, because upright pianos cannot completely rely on gravity; they include various springs and additional materials to pull some of the action and hammer parts back into their original position after keys are released.

Some piano teachers will say the release is more important than the attack, but I disagree. I fully believe the two are equally crucial in beautiful tone production. The release gives you subtle control over how a sound rings. This is especially true with newer grands that have a sustained damper technology. There are typically three stages of key positions:

Because there’s less than an inch of space between the first and last position, it takes years to master minute variations of each. Start experimenting by lingering in the half depressed position after your play chords that are extended by ties or for longer durations (e.g., whole notes). As opposed to just relying on the sustain pedal, controlling a slower and more artful release will drastically change the amount of resonance and ring you’re able to draw out from the strings.

What you’re actually manipulating is referred to as sympathetic resonance. There are many additional layers of complexity to this harmonic phenomenon I encourage you to research on your own, but the key elements (pun intended) are understanding that sustained sounds are not just created using pedals – they’re sculpted by your release. If you linger on the keys in a fully depressed mode versus open or half position, you change the overtones that are born. It’s one part psychology in visual interpretation of what’s happening, and two parts science and mechanics. Experimentation is your friend when practicing to develop sensitive ears to detect subtle nuances in your sound that you’re aware of, and thus able to control.

Start with the bench height positioned to bring your elbows equal to the level of your wrists (or slightly higher). Your bone structure won’t allow the transmitting energy from your shoulder and back muscles if there is no direct path through the bones to the keys. If you sit with your elbows too low, your power is only coming from your forearms and triceps, a mistake many young pianists encounter. Just as you don't want your elbows to be too low, you also don't want your wrists to be too low.

Generally speaking, the back of your hand should not form an angle with the forearm; your wrist should be straight, but flexible. This will enable you to have the most control over tone production.

Because each string is independent from the other, as opposed to wind instruments having notes connected by the same steady stream of air, pianos allow note-by-note variations of attacks and releases. Try having small crescendos or diminuendos from note to note, paying close attention to the relative volume of each release, matching it will your next attack.

Pianist Robert Kelley explains that the only single-note dynamic possible on the piano is its natural decay, so in passages with sweeping crescendos or dolce cantabile, the resilience must come from a beautiful note-to-note line. Make sure the wrists are relaxed enough to allow hand rotations in all directions to facilitate the smoothest transition through phrases.

It takes fewer muscles to play softly than loudly, so if you feel like you’re creating tension to restrict your dynamic range, think differently! Start by never using the soft pedal to help you play quietly, as it will damper the tone production and create dull-sounding lyrical passages. If you want a to shift to a darker tone, use the soft pedal and leave it down until you want a brighter sound again, but refrain from the temptation to depress it for quieter phrases.

Practice rhythms using pianissimo staccatos, slowly increasing your tempo as you become more comfortable, but maintaining the quietest dynamic possible. This will build up tension at first, but over time your muscles will strengthen and be able to relax, effortlessly depressing the keys to create almost ghost notes. Try and relax your forearms as much as possible, and utilize your tricep muscles (the back part of your arms) to allow maximum relaxation of the flexor muscles.

We sincerely hope using these tips will lead you down a road of experimentation and acute awareness of subtleties that will make your performances brilliant. Music is all about sensitivity and emotion, which come from a balance of consciousness and trained reflexes. Go make beauty happen!