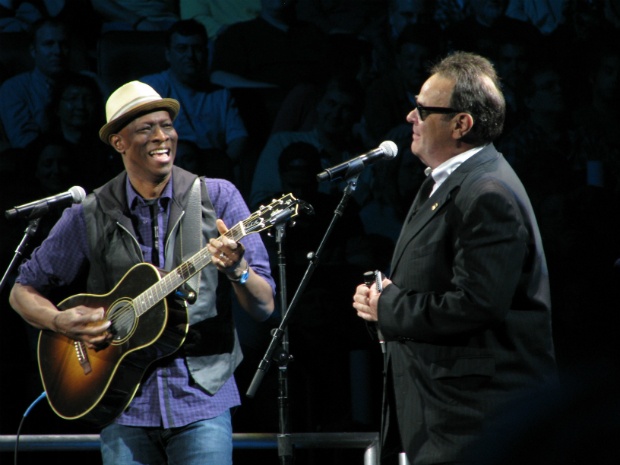 So you’re taking the stage for your band’s big gig. You’re well rehearsed, nervous (but in that good way) and you’ve got your stage banter planned out tighter than an Abbott and Costello routine. You nod to the lead guitar player to make sure he’s okay, you check with the bassist to make sure she’s ready, you plug your acoustic in, and the drummer counts in the song. Everyone in the band comes in just as they’re supposed to, but when you rake your pick across the strings, you’re greeted with a tinny, thin, remarkably unexceptional sound that’s nothing like what you’re used to hearing when you play at home. Now you’ve got to make your way through an entire set sounding like you're playing a piece of fence stretched across a wooden pole. So what went wrong? How can you fix your sound before the next gig?

Finding the proper setup for your acoustic instrument is difficult. It can be hard to get the sound you want when you get onstage, and even then, the sound guy may have his own idea of what sounds good. Acoustic instruments are the perfect amalgamation of old and new: they’ve been around for as long as people have been playing music, but they face unique challenges when they interact with modern realities like PA systems, poorly designed stages, and overly chatty audience members.

If you plan on getting onstage with your prized new acoustic guitar, banjo, or whatever, you should be putting just as much thought into your setup as you did into buying the instrument in the first place. With that in mind, here are some things you should take into consideration, and some potential tools you can use to get the best sound out of your instrument.

This is probably the thing that most people are worried about when taking an acoustic instrument onstage. Depending on the people you’re playing with and the room you’re playing in, a lot of things can impact your sound. If you’re playing acoustic guitar with a five-piece rock band, you’re going to have a different set of problems than the guy playing banjo in the bluegrass three piece. Making yourself heard is important in all situations, but you also need to avoid turning up so high you create feedback. This is a nuisance to audience members and a nightmare for sound guys. So take time to think about where you’ll be playing and what style of music you’re going to be playing before setting up your rig.

Tone is one of the most scrutinized things in music. People spend decades searching for the perfect tone. When it comes to acoustic instruments, finding the one that sounds right to your ear can feel like coming home after a year of working in a coal mine. When the perfect wood comes together with beautiful craftsmanship, it can be the end of a lifelong search, but translating that sound onto the stage is an entirely different equation.

First off, when plugging in, you need to make sure that the dominant frequencies from your instrument don’t interfere with the others onstage; that can mean taking some bass or mids away from your guitar. Secondly, the thing that makes your new mandolin sound angelic in your bedroom may not translate to a coffee house or concert hall. You need to find the best tone for the stage and set your tone so it sits nicely with everything else. Save the pretty, natural sound for the studio if you have to.

Besides a bit of a boost for a violin solo or something, you’re probably not going to be running your acoustic through too many effects pedals. If you really want some crazy flange on that cello, though, it’s probably time to look at an acoustic amp rather than plugging into the PA directly. That will save you a lot of hassle, and any sound person can just as easily mic the amp.

[5 Rules for Not Pissing Off Your Sound Guy]

Tools of the trade

There are nearly as many different types of pickups as there are guitars in the world. I'll try to break down a few of the more prominent options out there.

Many musicians will actually use some combination of the above to zero in on the exact sound they’re looking for. Of course, you always have the option of simply sticking a mic in front of the instrument, but if you’re at all prone to moving around, this can make for some inconsistent sound. And on top of that, you’re at the mercy of whoever’s behind the soundboard, and he or she may not necessarily know that you like that bassy, boomy sound when you play.

When you send a signal out of your instrument, it needs a way to interface with the sound system. This is called a preamp. For many stage-ready guitars with active pickups, the interface is already built in (those fancy knobs and sliders we talked about earlier), and you may not need a preamp. But if you’ve got one of the other thousand options out there, a decent preamp can be a huge help in shaping your sound before it hits the speakers.

If you gig a lot, a good DI box will almost certainly be your most useful piece of gear. DI, or direct insert, means that the interface takes the signal from the instrument and inserts it into the soundboard. There are incredibly simple models that consist of nothing more than a small box that sits on the stage floor with a quarter-inch input and an XLR output. Others, like the ever-popular LR Baggs Venue DI, include a five-band EQ and phase-invert switch and is basically the industry standard at this point.

The next step up from the DI box is getting your own acoustic amp. These range greatly in both price and size, but depending on what your setup is and who you’re playing with, they can be a big improvement and give you almost complete control over the sound you put out. They may be a bit of a nuisance to carry around if you’re used to just slinging your guitar over your back and heading out the door, but getting that extra level of control and dexterity can make all the difference.

No matter what you end up getting, shopping around is key. Consider how you want to sound, and try your best to get that by experimenting and comparing. Looking at all your options out there is the best way to get a sound you’ll love and blow audiences away.