How to Get Your Band on 5 Cool Live Sessions 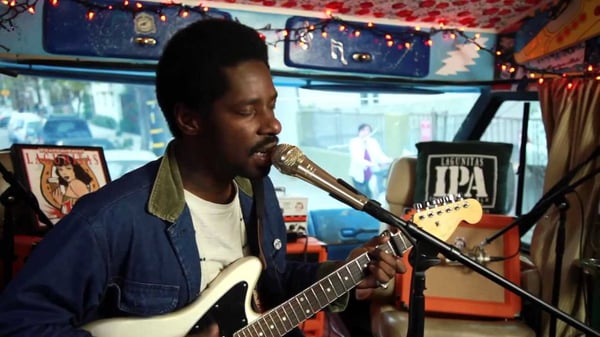 Curtis Harding's Jam in the Van session. (Image via curtisharding.com)

If performing an NPR Tiny Desk concert or recording a set for Daytrotter is part of your ultimate plan, then you'll love these lesser known live-session series. All five of them are first rate, each with its own individual appeal – and they're all open to submissions from bands and artists. Read on for more about them, plus clips of some of our favorite performances.

This one is an offshoot of indie music staple My Old Kentucky Blog – so, of course, the selections are choice. Most are filmed in various music shops in Indianapolis and showcase up-and-coming acts from all over. The frequency of performances isn't super high, but that makes sense considering it's really a side project of MOKB. They've hosted bands like Edward Sharpe and the Magnetic Zeros, Blitzen Trapper, and the Whigs, but also seem welcoming of promising up-and-comers, although it's not expressly stated.

How to submit: There's a form here.

Any rooftop in Chicago is a potential stage – so long as the artist has picked it thoughtfully and has all necessary permits or permissions. The artist is always the focal point of a live session, but Rooftop Sessions Chicago affords them even more reign over the process by allowing them to select the location. You set it up, and they come to you. Pretty cool. It's limited to Chicago spots, of course, but not limited to local bands only. Out-of-town acts in the area can also be featured.

How to submit: Read up on the requirements first, then head over to the contact page.

Launched in 2007, this independent music radio show and podcast is helmed by one person – surprise! – named Justin Wayne. It airs live every Monday at noon and sometimes features in-studio performances, some of which are filmed and posted to the website. This guy is a true champion of superb but lesser heard sounds: a lot of the bands and artists featured are new and still growing their following.

How to submit: Read the guidelines here.

Stationed in Brooklyn, Wild Honey Pie is a collective of creatives who blog, make videos, and organize shows and festivals. Bands featured in their live sessions, which are recorded at various top-notch local studios, range in styles from orchestral folk to alt-country to synth pop. Like Daytrotter, there's original art to correspond with each installment.

How to submit: This is easily one of the best known of this bunch; they've been around since 2009. Competition for inclusion is presumably a little stiff, but that doesn't mean it's impossible – they do accept submissions. (Scroll down on any page of their website to find the form.)

Undoubtedly the most original of these – or maybe even of all time – is Jam in the Van, a mobile solar-powered studio. They started with backyard shows, crowdfunded their way into a much-needed new vehicle in 2012, and are now 18,000 strong on Facebook. Punk, garage, rock 'n' roll, soul, pop, and everything in between has filled the hollowed-out and sonically-tricked-out van. Sessions – which are recorded with unprecedented frequency – are available for viewing or download for free, and they also offer interviews and the occasional written account via the Jam Van Journal.

How to submit: Send all relevant info to bands@jaminthevan.com.