How to Make Sure Your Band Gets Paid for the Gig 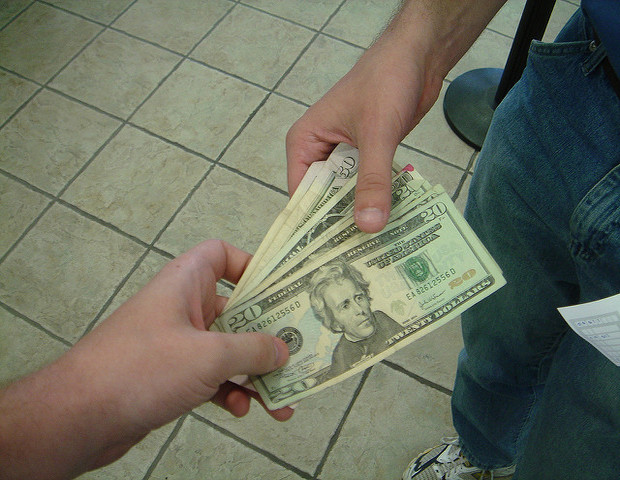 Photo by Quazie via flickr.com

You’ve just finished playing. You traveled five hours to get to the show. The promoter has done a fine job putting the gig together – you can tell just by the number of people who’ve come through the door. With the $10 cover, it looks like everyone will be able to eat tonight. But then it happens: the promoter doesn’t want to pay.

Every band has been there. And if you haven’t yet, you will be eventually. Because no matter how hard everyone works, there are still assholes out there in the world who will try to take advantage of you.

A good concert works best when everyone is working together. The venue is there to provide a space for the bands to play in, the band’s job is to entertain people and get them to buy drinks, and the promoter is there to get people in the door. If everyone does their part, then everyone wins.

Sometimes, though, one of the pieces of the machine breaks down.

This is, by no means, to say that all promoters or venues are made up of shady characters. But there are instances when a promoter or talent buyer will tell you that, for whatever reason, they’re not going to be paying you your cut that evening.

Of course, this is all assuming that you did your job. If you showed up too wasted to play, forgot your songs, or had some sort of technological meltdown onstage and the venue says they’re not going to pay you everything you’d agreed on, then fine. You didn’t hold up your end. But if people were banging their heads along and pounding back brews, then you should get what’s yours. There are a few tricks you should have up your sleeve to make sure you get paid properly.

Having an idea of the number of people who have come through the door is always smart. We’re not talking Rainman-level counting here. You don’t need to know to the single digit how many people paid the cover. But doing a rough count of how many people were in the bar while you played is good ammunition for when you go up to the promoter and ask to get paid.

Just try to count groups of people by fives, and then you can go to the promoter and let him or her know you know how well the bar did that evening. Try saying, "There were at least 120 people in here tonight. At 10 bucks a head, that's $1,200. You promised us 10 percent of the door. That’s $120, please." Or something to that effect.

2. Make an agreement up front

Talking about money is icky, but it’s one of those necessary evils in a business relationship. So everyone should agree up front how the door is going to be split and whether or not the performers will get a cut of the bar.

And for the love of all that's good and holy in the world, get it in writing. Have something you can point to that shows you came to an agreement about pay. This doesn’t need to be some high-falutin’ legal document – just an email between your band and the promoter will suffice.

[What to Do When Venue Staff Treats Your Band Like Crap]

3. Stick to the agreement

If a bunch of people snuck in through the back, or if fewer people showed up than anyone was expecting, you still have to honor your agreement. Remind any shifty promoter or bar manager of this fact. But you also have to hold up your end of the bargain. So make sure you did all the necessary promotion on your end. You don’t want to go flying off the handle all hypocritical.

When the chips are down and someone is telling you they’re not going to pay you, you have to stand your ground. This is easier if you’ve followed the previous steps. Go to the promoter or manager and tell them how many people you counted in the bar, remind them of the email in which you’d agreed to the payment, and tell them that you did your part to promote the gig.

It’s probably a bad idea to completely freak out. If you respond to the booker’s refutations logically and calmly, then you become harder to ignore.

If only two people showed up and they were the boyfriends of the girls in the opening band, then don’t be too much of a stickler for your money. You’ll get a few crap shows on every tour, and for the most part, you’re going to have to eat that cost. But if you’re nice, promoters will remember that, and they’ll have you back the next time you come through town. So if a show isn’t as successful as you’d like, just remember that you make music for the fun of it first.

6. If it comes to it, remind them that karma sucks

At the end of the day, you’re relying on the kindness of strangers. Unless you’re in the big leagues, there are no lawyers involved and very little legal recourse you can take if someone doesn’t pay you. If you’ve stood your ground and they still won’t give you the cash, remind them that you’ll be telling every musician you know about what happened there that night. Take comfort in the fact that in the music world, word gets around – and these types of people will eventually get what’s coming to them.

For every asshole out there, there are 10 people working hard to make sure every show goes off without a hitch. These are the folks we should be celebrating. So when you meet someone nice in the scene, tell everyone you meet about them, too. If everyone works together to create something cool and positive, maybe fewer jerks will come around to spoil the fun for everyone.