How to Soundproof a Basement Practically for Free: A DIY Guide 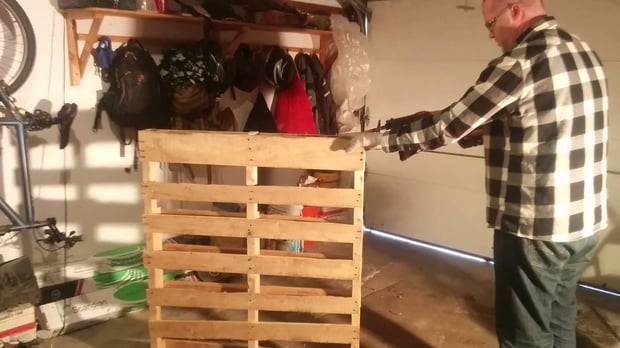 Suburban basements underneath single-family homes are the natural habitat of rehearsing bands. Most of us have paid our dues in basement practice spaces and are familiar with the hazards of this situation: standing water on the floor, warping guitar necks, spiderwebs in your hair, and heartfelt acoustic numbers ruined by a loud furnace kicking on across the room. But the worst thing about practicing in basements must surely be noise complaints by frustrated neighbors. If you’re lucky, they’ll bang on your door to complain, but some just go straight to phoning the police.

Fortunately, there’s an easy and cheap way to soundproof that basement, and it can be done in an afternoon. Even better, this method can isolate you from loud mechanics like that rattling boiler and improve your acoustics at the same time. You might even be able record a demo without meeting any of your town’s finest.

The first thing to do is find a big vehicle. Hopefully your band already has a band van, but a full-size pickup truck will do. Once you’ve borrowed that, it’s time to cruise your local commercial and industrial districts for raw materials. You are looking for two things: wood packing pallets and carpet remnants. Your tools? A pair of heavy shears (the kind used to cut sheet metal), a cordless drill-driver, and a box of screws. The screws are the only thing you might have to pay for.

The pallets should be easy: they’re those wooden frames that allow forklifts to unload things by the truckload at warehouses, big box stores, and factories. Some of them are reused by the trucking companies who brought them, but they’re so cheap to manufacture that many of them are simply thrown away. You might well have been to a summer party at which they were chopped up to start a bonfire. Talk to employees at any of these facilities. It won’t take long to find someone willing to part with a stack of pallets.

3. Grab a bunch of carpet remnants

Next, find a carpet store. Most carpeting shops have a dumpster filled with remnants, those odd slices of carpeting left over when a carpet was cut for a room. Once again, you’ll want to speak to the employees so you don’t get arrested for robbing the dumpster. But these remnants are generally viewed as trash, and you’re saving the company money by hauling them away, so you should quickly be met with approval.

4. Build yourself a wall

In most basements, two pallets can be stacked to form a wall that slightly overlaps with the wooden ceiling joists. This wall isolates your band’s practice area. Connect the pallets to each other and to the joists on the ceiling by screwing them together with your drill-driver. Pallet wood is usually very hard, so you might need to use a drill bit to bore some pilot holes first, and then drive the screws through them.

Once you’ve constructed your pallet wall, cover both sides of the wall with carpeting. Make sure that you cover each pallet individually rather than having the carpet cover the seam between pallets. That way, if you have to disassemble the wall, you can remove each pallet in one piece and preserve your hard work. Screw the remnants in place to cover the inside and outside surfaces of the wall completely. You can use the shears to cut all those random pieces of carpeting to fit. You’ll probably have a patchwork of different colors and patterns, so feel free to get artistic.

The air space inside the wall creates a great deal of acoustic insulation. You’ll also find that the carpeting inside the practice space deadens echoes and absorbs some of the harsher high-pitched frequencies of your amplifiers and PA system. In fact, your basement will probably end up sounding better than your living room.

If you’re a little bit handy and have another 10 dollars to spend, you can buy a pair of hinges and make two of these pallets into a swinging door for your band room. A small caster wheel at the bottom of the door will help the door open and close smoothly, and the carpeting can still extend all the way to the floor to keep the noise inside.

This is a simple and fun project for your whole band, roadies, fans, and anybody else who’s interested. It’s the musical equivalent of an old-time barn-raising. Get pizza and refreshing beverages and invite anyone who wants to help. You can even try to get those angry neighbors involved. They’ll appreciate you trying not to disturb them and might be less inclined to dial the cops over whatever sound seeps through the cracks.

Get even more soundproofing advice for home studios and rehearsal spaces.