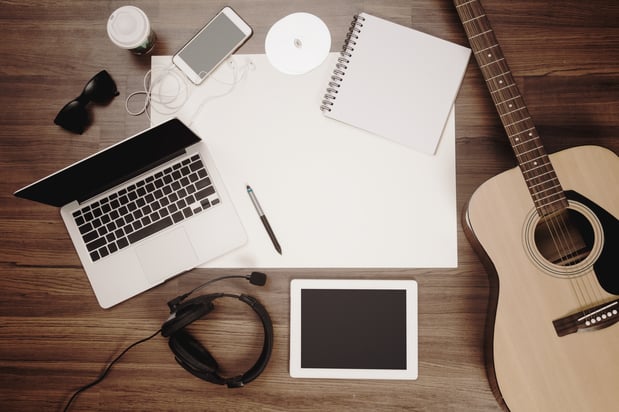 Musicians who are new to songwriting generally struggle to put their fragmented ideas into song form at one point or another.

They often ask themselves, “How do you know when a song is done? How long is each section supposed to be?”.

While there are all kinds of song structures out there in the world, some are more common than others. Writing in common structures as a beginner can help you organize those fragmented ideas.

Let’s take a look at some of the most common song structures that keep popping up in today’s music world.

Starting songs with an Intro and Verse used to be the most common approach. But lately, especially pop songwriters prefer getting straight to the point. By introducing the Chorus section of the song right away, they grab the listener’s attention and never let go.

Ava Max does this extremely well with the infectiously catchy Chorus of her hit “Sweet but Psycho”.

A couple of years ago, VICE News published a video entitled “Why Post Malone Is So Damn Catchy”. In the video, they brought attention to the fact that half of Post Malone’s songs start with a Chorus section. Sometimes, the singer precedes that first Chorus with an Intro, like he does in “Better Now”.

Generally speaking, sections songwriters label as “Build Up” and “Drop” belong in the EDM world. But lately, pop artists have been employing this energy-inducing song structure, too. Who can ever forget Billie Eilish’s breakthrough hit “bad guy” that quietly and eerily excited us all?

Pre Chorus sections are extremely common in all kinds of mainstream genres these days. Because the Pre Chorus can often be used in a way to add another repeating section in a song in addition to the Chorus, it’s beloved by hitmakers worldwide. The Weeknd’s latest hit entitled “Blinding Lights” follows this formula.

Example: Halsey - “Without Me”

If writing a hit is what you’re after, you should keep in mind that repetition in moderation is key. Repeat the Chorus one too many times, and your song will get boring very quickly. Include multiple sections that repeat twice instead, and you just might engage your listener all the way through. By repeating the Pre Chorus, Chorus and Post Chorus sections, this is exactly what Halsey achieves with her massive single, “Without Me”.

This was once the most common song structure in the contemporary music world. Now, it’s considered traditional- but that doesn’t mean you shouldn’t give it a try. Taylor Swift often enjoys writing in this format, and her song entitled “the last great american dynasty” from her latest album, “folklore”, sets a great example.

Sometimes you’ll have lengthy Verse sections in your hands, which won’t leave room for much else. In those cases, sticking with a simple Verse-Chorus structure might be the answer. Even legendary artists like Beyoncé occasionally go back to basics. In “Love Drought”, the artist uses the Verse sections as a device for inducing a confrontational conversation, while summing up her emotions with a few lines in the Chorus.

Successful songwriters' ability to make unique structures work by connecting the dots between each section thematically should inspire all newcomers.

If you listen closely, between all the common song structures, you’ll notice one mutual point: “the multiples of 4 rule”. For instance, after a 4-bar-long Intro section, there might be a Verse that lasts for 8 bars, followed by a 16-bar-long Chorus section. This is why counting and analyzing the structures of your references is key to improving your skills as a songwriter.

That being said, you will occasionally come across instances where such commonalities are overruled. It’s just as important to recognize those instances, too.

Some gatekeepers in the industry shy away from innovation. But innovation is exactly what the modern music listener seems to be craving.