Is Pop Music Getting More Annoying? (And How to Avoid Pop Pitfalls in Your Songs) 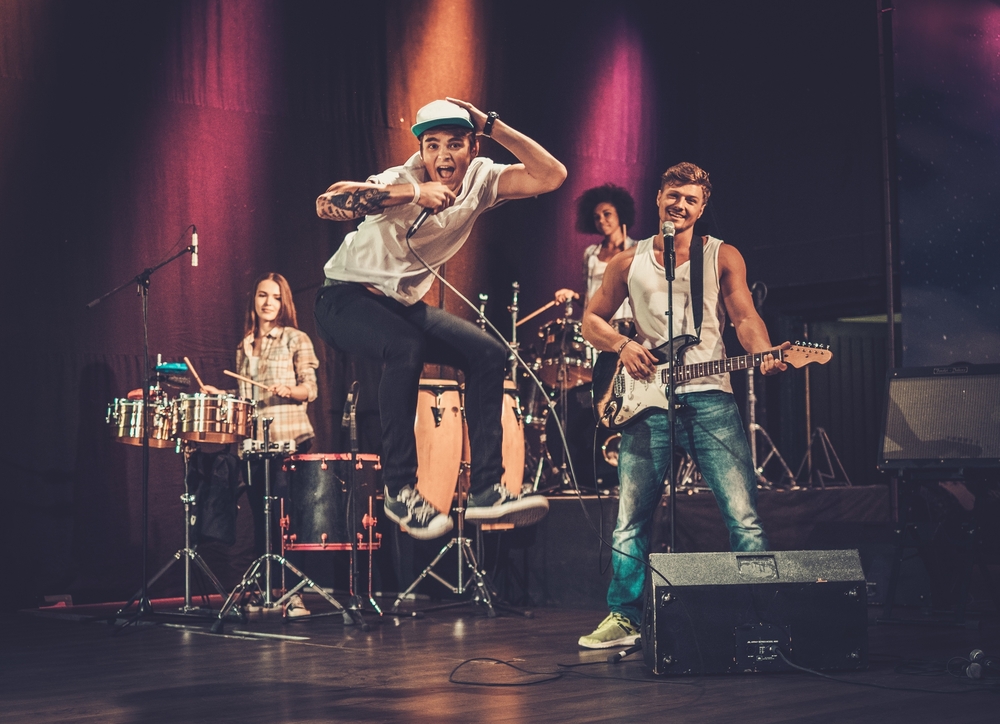 Your answer to this question may be a resounding, non-hesitating, “Yes!” And I’m with you. Pop music nowadays can be really repetitive, uninteresting, and just irritating.

But even though it feels like pop music is more annoying than it used to be, is that actually true? And can the rest of us learn something from pop music?

Back in 2017, a programmer and data nerd named Colin Morris wanted to answer the question, “Is pop music more repetitive than it used to be?”

And he wasn’t messing around.

He took 15,000 songs that charted on the Billboard Hot 100 between 1958 and 2017 and analyzed them. He looked at the “number of unique words in a song, as a fraction of the total number of words.” Then he used some sort of dark-magic algorithm to spit out a concrete way to measure a song’s repetitiveness.

And repetitiveness, to me, usually equals “annoying.” At least when it’s overdone.

Here’s a nice little chart Morris made that shows us, yes, the most popular songs (as well as all songs in general) are getting more repetitive. 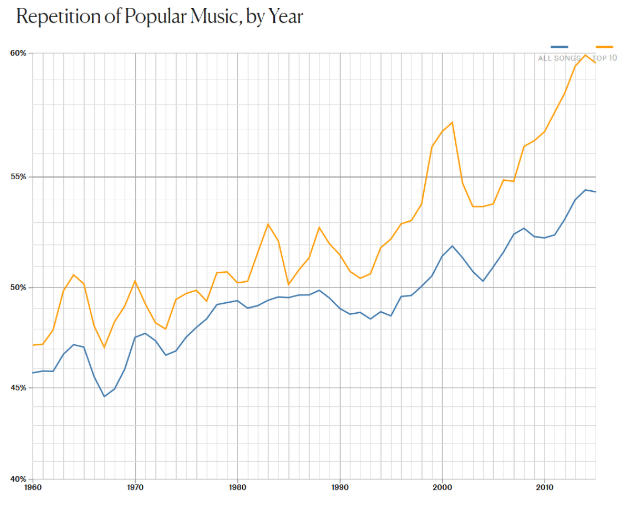 And he said this is regardless of the genre that was popular at any given time. The Beatles, Justin Bieber, and Mariah Carey all have about the same score — each of them have above average repetitiveness in their songs that have charted.

Here’s another image that shows us each artist’s average repetitiveness in their songs compared to their peers: 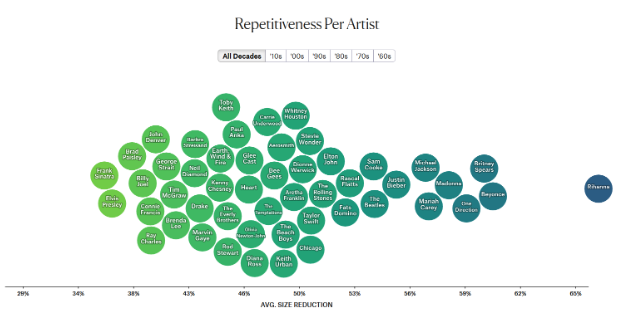 It’s not surprising Rihanna is winning in this game of repetitive songs (think “Umbrella” and “Diamonds”). But what’s interesting is that on both ends of the image above, you can see talented artists and songwriters. For example, you’ve got The Beatles and Beyonce on the right and Billy Joel and Ray Charles on the left.

So what are we to make of this? Should we strive to use more repetition, or should we find inspiration from “the good ol’ days” when popular music had more variation?

The takeaway for songwriters

My big takeaway here is this: Repetitiveness in your songs is good until it’s not.

Obviously, you do need some repetition. If you never repeat a melody within a song, the listener will get overwhelmed and lost and turn it off. So it’s a good idea to have a chorus that repeats the most memorable melody and main lyrics at least two times.

But you don’t want to repeat those lyrics and melody over and over again until it annoys people. It’s all about balance. Hold repetition in one hand and surprise in the other.

Here’s what you do with a good song: you welcome the listener in with repetition. Get them comfortable. Offer them something to eat and drink as they get settled into the song’s armchair. Allow them to adapt to their surroundings. Then bam! You hit them with surprise. You play a diminished 7th chord, you throw in a little vocal run, or you stop the music a couple beats before the big chorus.

You use repetition to set up the surprise. Repetition makes surprise that much more effective, and vice versa. You need both. They survive on each other.

So you don’t want to make music as annoying as Rihanna’s, but you may not want to write such obscure, non-repetitive music that you’re not on anyone’s radar.

So is pop music getting more annoying? I think so, but we can still learn from it.

Next up: What Every Hit Song Has In Common