Make Music New York Brings Sound Out From the Underground 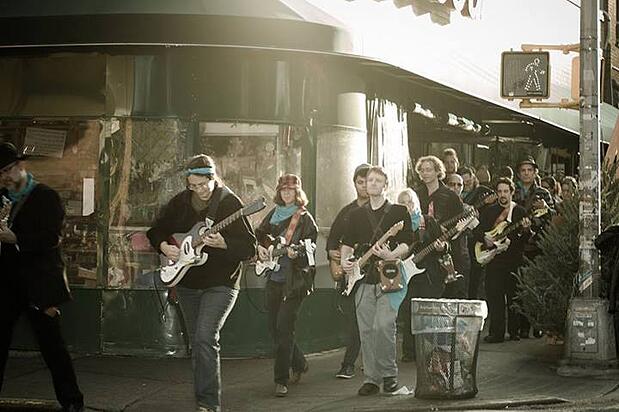 Jeff Tobias is a musician, composer, writer and teacher living in Brooklyn, NY. He has been an active artist within the American underground/DIY music community for the last 10 years.

Nearly nothing is more effusively encouraged or endorsed in the 21st century than universal self-expression. The creative act of music-making is practically a human right – until it reaches a certain threshold of volume. When the decibels start to approach a level of encroachment, one man's deeply personal creativity becomes another man's unwelcome noise pollution.

That is why we banish our bands to dungeons: I'm speaking of rehearsal rooms, those frequently dingy lockout spaces carved up into mildewy boxes without windows. There, musicians can be as expressive as they want, while still maintaining a polite distance from respectable society. That way, they can finesse and craft their life's work to perfection before unveiling them at the usual venues: frequently dingy rock clubs.

The repetitive shuffle between subterranean practice spaces and under-lit, under-scrubbed venues can result in a feeling of nocturnal exile, or, at the very least, a vitamin D deficiency. This is the true glory behind the concept of Make Music New York, one of the most sprawling and autonomous music festivals I've ever participated in. For the last eight years, on the first day of summer, this nonprofit organization has helped facilitate hundreds of outdoor performances all across the five boroughs of New York City.

For MMNY, you – the artist – come up with the concept for a performance. (For instance, perhaps you want your vaporware duo to perform in front of your favorite dumpling place in the East Village.) You submit a proposal, and then MMNY does the dirty work, "[setting] up the framework for your concert by securing and paying for all necessary permits, coordinating artists and locations in each neighborhood, and publicizing the event city-wide with tens of thousands of posters, earned media stories, concert listings with our media partners, an interactive website, and a volunteer street-team," as per MMNY's FAQ. The result is a free, citywide spectacle of sound, with music seemingly emanating from every alleyway.

My friend and fellow composer/performer Dave Ruder had been a part of MMNY in years past; we decided to hatch our own plan to contribute to 2014's festival. Rather than proposing our own location, we chose from the 100+ parks made available on a first-come, first-serve basis on MMNY's website. It was decided that Carl Schurz Park, a tiny slice of green abutting the East River on the Upper East side, would be our stage. Finally, music out of doors! Freedom! Sunlight! My eyes burned with anticipation.

Dave and I are from similar walks of life. As our bio for the event put it, we're both "veterans of a huge range of rock groups, free form improvising units, and experimental chamber ensembles." Both of us gravitated towards a kind of formal composition tempered by inclusive inclinations; avant ideas for the man on the street. We decided to put on a performance that was based on simple scores written for open instrumentation, meaning any sort of musician could participate. However, MMNY makes no guarantee of electricity being available, so we ruled out amplified instruments. We figured drums wouldn't be welcome in the park, and would be likely to mercilessly drown out all else besides. So we narrowed our scope of instrumentation down to woodwinds, brass and string instruments. 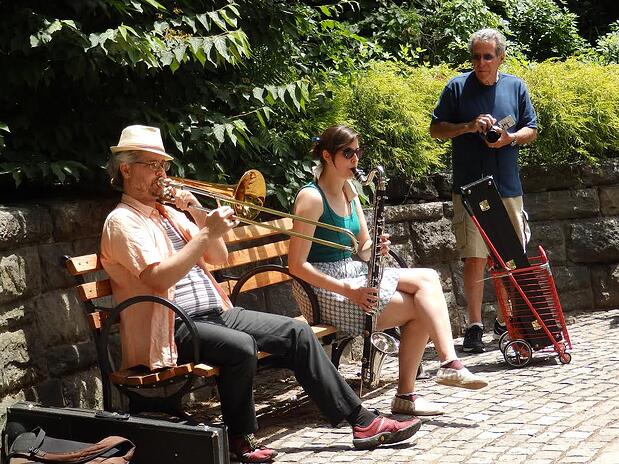 From left to right: Greg Briggler, Zara Acosta-Chen and a photographer (photo by Lynne K. Tobias)

With MMNY a month away, we met at the park to investigate and brainstorm accordingly. Carl Schurz Park is situated in the seat of privilege, its main entrance resting where East 86th Street dead-ends into First Avenue. The view from the promenade was a panoramic, reaching from Hell Gate to Roosevelt Island and beyond. From where we sat watching boats laze by, we were just south of Gracie Mansion, the current home of Mayor Bill de Blasio. The foot traffic was brisk, but not overwhelming. We made plans to devise three glacial tone poems, each one matching a different setting in the park: a half-moon flowerbed, a pair of curving staircases that created a set of giant stone parentheses, and a circular hideaway called - I shit you not - Peter Pan Garden.

We arrived at a band name for this project via the typical circuitous free-association wordplay one employs for such things: Florida Lucid Dreaming. Our motto: "Where everything's totally fucked up, but you can still do whatever you want."

MMNY is so beautifully open as an idea, but that magnanimous openness brought us to two of our first issues. For one, because no admission can be charged for MMNY events (a rule I support full-heartedly), no pay could be issued for the musicians. So we needed people to roll out to our 11 AM call time out of a sheer love for making sound. It's not too hard to find that brand of love in New York, which led us to our second issue: many of our friends were spoken for, obligated to other MMNY performances. We ended up with a crew of nine: just enough people to create the sort of blanketing drones we were hoping to weave.

On the day of the performance, I stepped off the 4 train at 86th Street to find Dave jumping off the train car just ahead of mine. We walked to our arranged meeting place and waited for our performers to arrive: a clarinetist, a trombonist, two flautists, a baritone saxophonist, a euphonium player and a vocalist. There were no volunteers to greet us, which was fine: autonomy is what MMNY runs on and relies on.

We passed out the scores and talked through them. We quietly ran through some of the main themes. A few older folks milled about expectantly – people from the neighborhood who'd read that there was going to be music of some kind at the park. When were we starting? "Soon," we told them.

At noon, we sat in a half-circle around the flowerbed. We were about to launch into our first droning piece when an unexpected opening act popped up in the form of a sunbathing senior citizen wearing a straw hat and a pair of speedos. The deeply tanned man stood up and began to peremptorily return the musical favor, serenading us with some manner of show tune. Larry Bustamante, our baritone sax player, fell out laughing. Aliza Simons, our euphonium player, musically accompanied the older gentleman. This is what MMNY is about: public engagement!

We announced ourselves and began our first piece, a spare exercise based on two chords and a three-note half-melody. The sound dispersed over the East River. Curious dog-walkers stopped to see where the sound was coming from, became momentarily engaged or entranced, moved on. Overall, it came off well, and we moved on to our next location. The two curved staircases hugged a slanted garden crowded with flora; we spread out into a circle and began passing a melody from performer to performer, like a game of telephone. Trombonist Greg Briggler spun in place, pointing his sound into the trees and over the nearby hills.

For our third and final piece, we arranged ourselves in a circle around the tiny Peter Pan Garden. From our vantage point, there were three points of entry: two staircases that descended to the cobblestone, and a tunnel with an overpass above. This piece was our best idea: all the musicians maintained a drone, except for when a pedestrian entered from either the staircases or the tunnel. Entrances from either of the two staircases cued a different chord; an entrance from the tunnel signaled wild noise. It was like a door prize of harmony, awarded to anyone who came to listen in.

The first lucky participant to enter via the tunnel was a kid who couldn't have been older than ten years old, racing towards us on a scooter. When he emerged from the shadow of the overpass, we exploded: wild horn blasts, animal sounds and animated shouting. He seemed impressed. We began walking around the space, bouncing our sounds off the shady green. An older couple trying to read their newspapers eyed us with a deficit of good humor. We ended the piece by sending a few of our players strolling up to the overpass for the finale.

As we put away our instruments, we happily assessed our performance. After all was said and done, it was still only 1 o'clock in the afternoon, and there was plenty more MMNY to be had. Dave was headed to hear Gamelan Kusuma Laras, a Javanese gamelan ensemble; NPR was hosting a giant performance of Red Baarat at the library on Eastern Parkway in Brooklyn. Without any borders, aesthetic restrictions or costs beyond transportation, Make Music New York has permanently lodged itself in my heart as an opportunity to simultaneously soak up sound as well as sun.