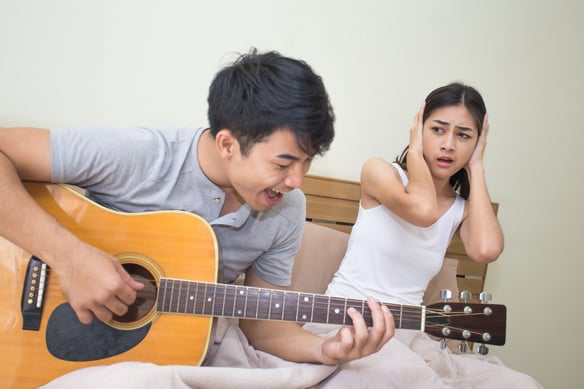 I’ve grown in my love for cliches, because if a saying sticks around long enough to become a cliche, it’s got to have some value in it. Otherwise, it wouldn’t have stuck around. And the cliche “practice makes perfect” is one of those valuable sayings.

You will not get better at making music if you don’t make music. Some of the best songwriters and producers are “the best” because they’ve created a ton of content.

Ed Sheeran says his success came from “writing a song a day or two songs a day or five songs a day” and just getting a bunch of songs out.

“You view it as a dirty tap,” he says of songwriting. “When you switch a dirty tap out, it’s gonna flow sh*t water out for a substantial amount of time — and then clean water is going to start flowing. And now and then you will get a bit of sh*t, but as long as it gets out of you, it’s fine.”

His point is that as a songwriter — or any music maker — you’re going to make sh*t music. And the best thing to do is just let it come out. Or else you’ll never get to the good stuff.

This idea is similar to the 10,000-Hour Rule, which Malcolm Gladwell wrote about in his book Outliers. The idea is that “10,000 [of practice] is the magic number of greatness,” according to studies he cites in the book.

He talks about how Bill Gates started coding as a young teenager and how the Beatles played a ridiculous number of shows before they blew up in the United States.

His point: The more you do something, the better you’ll get at it. Pretty obvious when you think about it. So let the dirty water flow. It has to come out at some point.

Learn from your mistakes

Because you’ll be writing terrible songs or producing poor-quality music at first, you’ll have plenty of chances to get better. Mistakes are not failures — they’re opportunities to learn.

Albert Einstein said we should “learn from yesterday.” Oscar Wilde said that “experience is simply the name we give our mistakes.” Winston Churchill said that “all men make mistakes, but only wise men learn from their mistakes.”

You get the idea. When you make a mistake as a musician, figure out what you can learn from it. Then make that mistake less going forward.

We’ve all been there

Even the greats started out playing sour notes. Even legends had to learn. Chuck Berry had to learn guitar. Nina Simone had to strengthen her voice. Surely George Martin started out producing not-so-hot songs. And you’ve probably listened to some of your early music and cringed (or is that just me?).

But that’s okay. That means you’re getting better.

Ira Glass, the host of the hit radio show and podcast This American Life, talks about this. He talks about how your current art will slowly get closer to your vision of where your art could be. “It’s going to take a while,” he says. “It’s normal to take awhile. You’ve just gotta fight your way through.”