Music Venues You Need to Know About: Portland's Hawthorne Theatre and Lounge 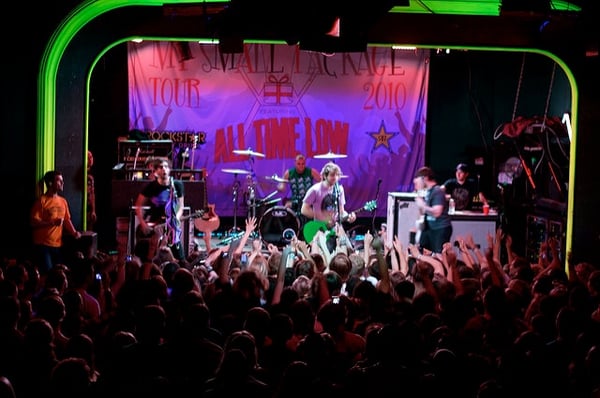 The building that houses the Hawthorne Theatre has seen a lot of uses: for 70 years from the '20s onward, it was a Masonic Building, then a series of pubs, then a ballroom, and later, it was a comedy club, a record store, then an art gallery. Since 2005, though, it's been a staple Portland venue for bands and artists of all genres, both established and up-and-coming.

“A lot of people think of us as a punk and metal club, but we do a ton of hip-hop, dance music, indie, and even comedy nights,” says marketing manager Sarah Kinney. “[Owner and national talent buyer] Mike [Thrasher] always says we're the Swiss Army knives of music venues – we can have any genre.”

With the two rooms of significantly different sizes – the 500-capacity theatre and the lounge, with room for 100 – operating five to seven nights a week, providing opportunities for up-and-comers doesn't fall by the wayside of catering to super-hyped touring acts.

The importance of their smaller lounge, though, shouldn't be overlooked. Zak Stevens has helmed its booking for a year and a half or so, and his open-mindedness about the room's possibilities are likely a boon to the Portland independent music community.

“Although the lounge has its own unique programming (music video debuts, readings, non-musical performance, etc.), it also serves as space to cultivate relationships with a wide variety of local music and their fanbases/communities, so we explore a lot of different genres there,” Stevens says. “We’re able to accept a wider variety of events because the operating costs/general impact of lounge shows are a fraction of productions in the theatre.”

On the same note, though, he adds that advertising budgets and production staff delegated to the lounge are somewhat limited. “Therefore, the bands that take initiative to promote, exhibit passion, resourcefulness, and professionalism [are the ones that] succeed,” he says.

Proving your DIY ambition and grit can do more than get you more bookings at the lounge, by the way. Steven also helps place local bands on national bills – and he gives consideration to those whose grit gets results.

“Plenty of the acts I book in the theatre [or] add to national shows began in the front room,” he says. “A few examples that immediately come to mind of acts that have grown from the lounge to playing with nationals in the theatre: Strictly Platonic and Question Tuesday. Both acts are not only driven and talented, but an absolute pleasure to work with in their professionalism and humility.”

Another plus at Hawthorne Theatre is that it's one of the few venues in the city still offering all-ages events. “One of the big ways we fit in [Portland] is [that] we are an all-ages club. A lot have gone out of business recently, says Kinney. “Many venues don't have that option of being all-ages in Portland anymore because there are a lot of city-wide restrictions. Many venues don't want to miss out on booze sales either. The Hawthorne does a lot of all-ages hip-hop, which there isn't a ton of places in Portland for this, especially for local hip-hop artists.”

Kinney also emphasized that Portland is overflowing with smaller clubs brimming with budding talent, and that emerging artists should look beyond the big names. "We have tiny little venues that you've probably never heard of, and you can find so much amazing music there and talented up-and-coming musicians," he says. "Sometimes it feels like everyone in Portland is in a band or is a DJ. If you're willing to get into the music scene, reach out to the local pubs and places that have nightly music. There's a place for you."

One of those welcoming gems is certainly their lounge – and, maybe eventually, the Hawthorne Theatre, too.