Naps vs. Coffee: Which Is a Better Choice for the Sleep-Deprived Musician? 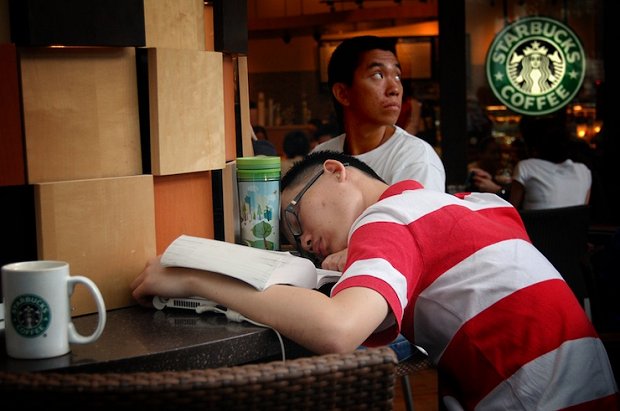 Naps were a way of life for me in college (though it's debatable whether a four-hour "nap" still qualifies as such), and there are indications that napping is becoming a more culturally accepted practice as companies like Google, the Huffington Post, Zappos, and Nike are encouraging employees to nap instead of insisting that they try to simply power through the mental fog of a mid-day lull.

Indeed, the literature suggests that we can derive a whole range of benefits from sleep – from better focus and performance to happiness and apparently even greater attractiveness. However, when we can't get the sleep we need (and really, isn't that all of us?), coffee or an energy drink still seem to be the old standbys.

Sure, these can perk you up a bit. And yes, they can enhance concentration and attention. But what sort of impact does caffeine have on memory and learning? Can caffeine keep you alert enough to think clearly and learn effectively, or is a good old fashioned power nap still the way to go?

Most studies on the effects of caffeine or sleep tend to focus on indicators like attention or wakefulness. This can yield helpful information when it comes to safety in the workplace or on the road, but it doesn't shed much light on more cognitively demanding processes, like learning your part to a new piece before rehearsal in the morning.

So, a group of researchers at UC San Diego ran 61 participants through a series of cognitive tasks emphasizing verbal memory, motor skills, and perceptual learning to see if there's a difference in effectiveness between caffeine and naps.

A day of tests

Participants came into the lab in the morning, and were trained on three different tasks: a verbal task (involving the memorization of lists of words), a motor task (involving tapping fingers on a keyboard in a particular sequence for speed and accuracy), and a perceptual task (involving picking out two targets against a background designed to make this a little tricky).

At noon, they were given lunch. And at 1:00 p.m., they were randomly assigned to either a "nap" group or "drug" group (i.e., caffeine or placebo). The nappers then took a nap (90 minutes max), while the drug group spent that time listening to a book on tape. At 3:00 p.m., nappers were awake, and half the drug folks were given a 200 mg caffeine pill, while the other half received a placebo. At 4:00 p.m., everyone was tested on all three tasks.

The caffeine group reported feeling more alert right before their tests than either the nap or placebo groups. However, when it came to performance, alertness didn't necessarily equate to better scores. Lo and behold, the nappers outperformed their caffeine counterparts on both the verbal memory task and the motor learning task.

The motor learning task results were particularly interesting, in that while the folks who took naps or a placebo pill demonstrated significant improvement and turned in markedly higher scores from the morning session to the afternoon session, the caffeine group didn't show improvement from morning to afternoon. Their learning seemed to be impaired. It's as if they started right back where they left off, whereas the nappers and placebo group experienced greater consolidation of their motor memory, seemingly picking back up at a higher level than where they had ended the morning session.

The limits of caffeine

At the end of the day, it seems that while caffeine is certainly an effective way of staying alert and awake, there are some limits. Specifically, that while you may really love your 4:00 p.m. grande mochachocolattespresso, it's not a complete substitute for sleep. Feeling more alert is great, but it doesn't necessarily translate to improved memory, learning, and performance on other more complex cognitive tasks.

So the next time you're feeling a wee bit sluggish and starting to nod off in the practice room, try a short power nap instead of taking a trip to your corner Starbucks.

How long a nap is best? Well, it seems to depend on what you need, and how much time you have. Check out this smorgasbord of sleep and nap-related links, and the five nap lengths you can choose from. And if you're curious as to what’s going on in our brain when we're sleeping, watch Jeff Iliff's TED Talk: One more reason to get a good night’s sleep.


Performance psychologist and Juilliard faculty member Dr. Noa Kageyama teaches musicians how to play their best under pressure through live classes, coachings, and an online course. Based in NYC, he is married to a terrific pianist, has two hilarious kids, and is a wee bit obsessed with technology and all things Apple.