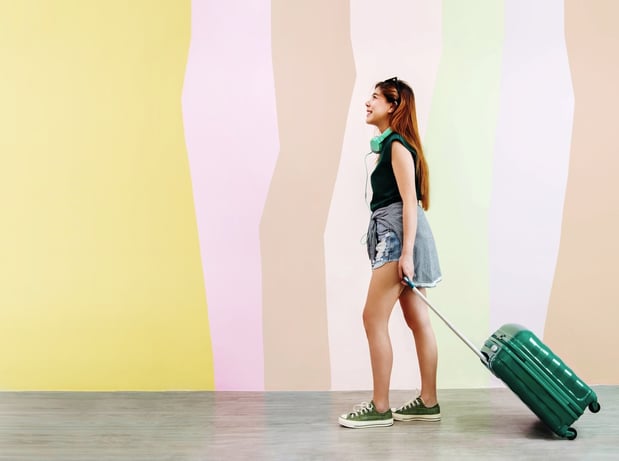 This post contains excerpts from episode four of The Music-Preneur Mindset Podcast WTF Are My Pants?


For those of you who don’t know, I’m a mindset coach for music professionals, teaching them how to slow down and focus on what’s important in order to create a sustainable career in the music industry.

This post is a bit of a personal story that I hope will serve you well next time you feel rushed to get it all done.

I teach the power of mono-tasking {opposite of multi-tasking} for a living, and yet I managed to move half-way across the country without any pants.

Okay, I was wearing a pair while I drove across these United States, but that was about it. I rented a Chevy Suburban, packed it to the brim, and took off… without my pants. Just because I know what’s right, doesn’t mean I always practice it. Sometimes, life just takes over, and we’re holding onto what we can until the storm passes. This is about that storm.

After two years of living with Lyme disease, August brought on a rather painful relapse. It was most likely due to poor dietary choices, as sugar can spur nasty symptoms. (Once again, I knew better. Prepare yourself for the pattern ahead.)

During the relapse, I became severely sensitive to light and sound. Living on the side of a major boulevard in one of the most populated counties in the country, not to mention in a building that was under construction 24/7 at the time, was not what one would call ideal.

I needed a break.

Being born and raised in New York, I was ready for a change in a quiet, more manageable city that still had strong roots in the music industry. I went to Nashville, found a cute little one-bedroom, and put down a deposit.

I started packing as soon as I returned home. For a full month, I lived out of boxes, afraid to leave anything out upon my leave.

I also did everything I warn others not to do – I over-promised clients, I took on too much at once, I said, “No” to NOTHING, and I put myself last the entire time. I didn’t want to let anyone down. I didn’t want to disappoint.

I wanted to prove that one little move wasn’t going to slow me down. I was a well-oiled machine.

But, there’s one problem – I’m not a machine. I’m a person. A person who needs sleep, and breaks, and time to adjust to big changes.

The day before I was set to leave, my mother surprised me with a mother/daughter day at Elizabeth Arden’s Red Door Spa. After an afternoon of massages and facials, we returned home.

I was in my apartment, packing the last few items, and when I went to text a message to a friend, I couldn’t find my phone.

I started looking everywhere, and couldn’t find it. I ran to the car, not there. Checked in the couch cushions, not there. Emailed my mom to see if it landed in her bag, not there.

Pure panic began to set in.

I started scrambling and drove all the way back to Red Door Spa (about 30 miles away in rush-hour traffic) and came back two hours later only to find the phone had slipped into the floor of the backseat of the car.

So much for relaxation to prep for a big trip. You would think I would have learned then to slow down. NOPE!

I stayed up most the night obsessing over things that were of little priority. I awoke the next day rushing to the car-rental parking lot to pick up the Suburban while my mom drove the other car back. I then insisted on packing everything myself, the way I like it done, and soon was on my way.

“Makes sense,” I thought, “I never called to put the electricity in my name.”

I unpacked, locked up, returned the car, and I settled into a hotel room nearby. The next morning I returned, and the building manager said, “Surprised you didn’t stay last night. Something wrong?”

I told them about the lights, and they said, “Didn’t you try the cord on the ceiling fan? We don’t shut the electricity off between tenants.” No. No, I did not. Because I was barely a human by the time I got there.

WTF did my pants go?!

My best bet is that I left them in the laundry room of my old place when I was scrambling to do laundry last minute. Because I was rushing. Because I tried to do too much. Because I was a machine who wasn’t actually a machine.

All too often in this industry, we place unrealistic expectations on ourselves, and that not only sets us up for feeling like we’re constantly failing, it also distracts us from focusing on what matters most and placing energy into those tasks.

The next time you feel the pressure to get it all done at once, remember you don’t owe it to anyone to prove you’re super human. You only owe it to yourself to last long enough to enjoy the fruits of your labor.

Moral of the story: Take care of you. Put yourself first so you can be at your best. And always remember your pants.