How to Sing Like a Superstar: Legends and Lessons 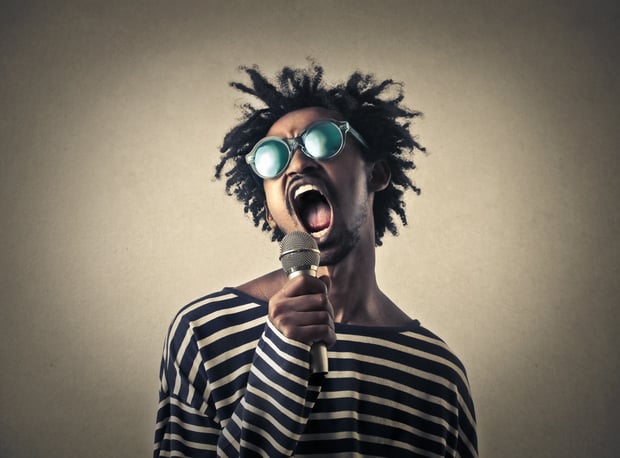 Lately we’ve been watching Lady Gaga absolutely crush her vocals. How did she go from a celebrity with a really good voice to this newly evolved  "superstar" status in a matter of the past 12 months? What’s her secret?

It all started with her performance at the Oscars last year, February 22, 2015, when she performed "The Sound of Music." We were awed. But her flawless vocals weren’t exactly effortless – Oscars executive producers Neil Meron and Craig Zadan revealed that the 28-year-old singer actually practiced every day for six months for the 50th anniversary tribute. "She worked half a year with a vocal coach every day for half a year to do that," Zadan told ET.

The next year, the 29-year-old songstress blew viewers away when she sang the National Anthem at Super Bowl 2016 followed up by her tribute to David Bowie at the Grammys last month. She’s on fire.

How does one go from good to great or even superstar status in 12 months? Practice, commitment, and accountability. The trade secrets below are a part of my vocal mastery program that I share with my celebrity stars and independent musicians and artists in my private VIP programs, and that I bring to you here! Here are my quick-and-dirty superstar singing lessons.

1. Smooth out your vocals

Work on smoothing out your transitions from note to note, from word to word. Each singer is different, so you’ll have to assume which is right for you. Some singers over emphasize their consonants (sounding more "musical theatre" like) and some don’t sing their consonants enough. In general, I find the first is more common. So I’ll speak to that (and you adjust if you're the latter).

De-emphasize your consonants and sing more on your vowels by feeling them and letting them "pop out" more. Vowels are what we "sing on," not consonants. You can also try linking the consonant from the word prior to the next consonant or vowel in the following word to smooth out your sound. This creates more of a "legato" voice which is what singers benefit from with a solid vocal technique and training. It makes the voice sound effortless! Legato is your best friend, baby!

2. Include finishes that are just as good as beginnings

A dead giveaway of a sub-par vocal is a big emphasis on beginnings and dropping off on endings. In voices that have mastered singing, you’ll notice the endings are just as great as their beginnings. Most of it has to do with mastering the breath. Once the breath is more relaxed and deeper, the singer isn't running out of breath at the ends of phrases and can finish without struggle or dying off. Using a little vibrato or a smooth riff can help create smooth finishes.

Skillful voices are also quite deliberate with which beat they end the phrase on to create an irresistible rhythmic dynamic. For those of you who are musicians, holding over to the "and" of the four or ending on an upbeat or the downbeat of the following measure can create a super awesome effect. For those who aren’t schooled musicians, train with a coach (like me) who can show you these cool effects!

Overdone or odd pronunciations can kill vocals on the spot. Because we hold out vowels during singing (and not in speaking) there are plenty margins for error. Between diphthongs (words with two vowels – of which you only want to pronounce the first) and other weirdness resulting from drawled-out enunciations, it’s time to do some clean-up. Sometimes unusual pronunciations work, so these are only for those that don’t. And don’t worry, you’ll know… or your audience (or lack of one) will speak for you. Pop music (or any contemporary commercial genre) is more "conversational" in how you pronounce. Notice how much Lady Gaga has cleaned up her "New York accent" in recent months as she works to smooth out her pronunciation. It’s always good to leave a little individuality in your voice, so don’t scrub it all out, just enough to sound polished.

Crescendos and decrescendos are the heart of great vocals.

Think of the arc of a whole song and then think in sections. Where are the opportune moments for dynamics to build your vocal? Work off of lyrics and the instrumentation for cues.

As a vocal arranger my job is to make the vocalist sound 10 times better than he or she would on his or her own. A big part of that is creating "moments" – highlights in the vocal. And more than often, even extremely talented singers I work with still manage to leave opportunities on the table. It’s hard to be objective about your own voice and even more so on your own song. Covers are easier because the vocal interpretation is already created.

Every great vocal has a few "moments" where a note is either held out longer than expected, or a beautiful riff (a flurry of fast moving notes) is added for a peak effect. A quick way to milk those moments is to try and hold a note at the end of a phrase out a little longer (hold the vowel out longer, not the consonant). Milk it by holding it out; don’t cut it off too early! This gives the listener a chance to linger longer on the thought.

6. Juggle both pillars of pitch and emotion

Pitch matters – a lot, but so does emotion. It’s hard to do both well. Most singers get it after a lot of experience but tend to favor one or the other. But the superstars of singers do both extremely well. Whitney Houston, Aretha Franklin, Jesse J, Sia, Jeff Buckley, Steven Tyler, Bruno Mars – all master singers who have both. Don’t be discouraged, because it can take years (even decades) of practice and gigging to get to that place of mastery.

In the meantime, a few tips: When you focus too much on emotion, pitch can easily suffer. When you focus too much on pitch, emotion suffers. To work on your pitch (which will help you express more emotion) train in vocal technique 5-7 days a week for 45 – 60 minutes. For about 20-25 minutes use Hearfones (a device that forces you to hear the center of pitch and sing with better tone that I use with my students. Garners results in half the time!) Also, use my Singers Gift Warmups – a 50 minute regimen that opens and strengthens your voice for performance.)

To practice emoting, record yourself, listen back, and analyze. Learn how to scoop, hold notes longer, sing more open on your vowels, smooth out your voice, work your finishes (all of the above), and connect more deeply to your lyric and your own emotion – all of which will create a more emotive vocal.

Your voice is not only a melodic instrument, it’s a rhythmic one. The way you lay down the rhythm of the vocal line is called phrasing. How you phrase is one of those distinguishing factors of your voice. Pay attention to the rhythm of your vocal line and how it falls in alignment with the music. Every song requires a slightly different technique to make the vocal work. Sometimes you have to sit back in your phrasing – it’s called "singing slightly behind the beat." Sometimes you have to be right on top of the beat, and some songs require being slightly ahead. The "behind the beat" technique works on most songs, but be sure to finesse and tweak to get in the saddle correctly. Your musicians, and your listeners, will love you all the more for it!

Cari Cole is a celebrity vocal coach, artist development expert, and new music business mentor. She helps artists and musicians find their voice, build their brand, and create successful careers in music. Grab a free copy of her Vocal Road Warrior three-part series: how to keep your voice healthy while you're out conquering your tour!