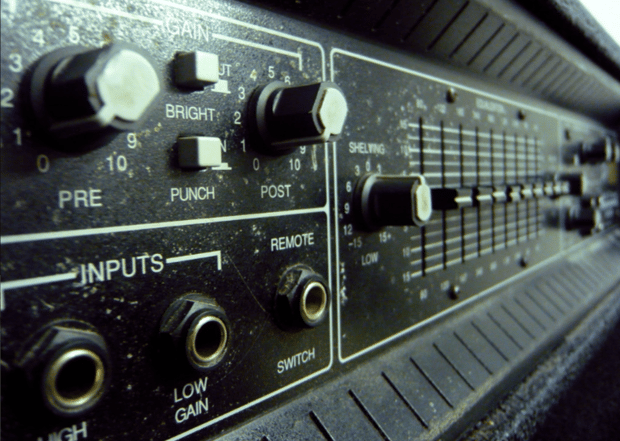 There are lots of great bass amps out there, but many awful ones, too. Certain bass amps, however, are standards, benchmarks of quality in the field of low-end amplification. Check out this list to learn about six of the most familiar faces in the bass-amp game.

My trusty Ampeg SVT Classic has a new friend to play with...an actual Vintage Ampeg SVT. It's Bass Amp City over here and I'm the Mayor!

The first Ampeg SVT, or Super Valve Technology amp, was introduced in 1969 and produced a hulking 300 watts of power at a time when most amplifiers produced less than 100. It was made to run with not one, but two 8x10 cabinets, as the head was too powerful for just one.

SVT heads have been the standard in tube bass amplifiers for the nearly 50 years since their initial release, and have undergone numerous makeovers and upgrades over the years. Their features and functionality have varied with time, but the Ampeg tone hasn't. It is a sound characteristic only to Ampeg that many professionals swear by.

Another characteristic synonymous with Ampeg SVTs is their gargantuan size and weight for a bass head, weighing in at a hefty 80 pounds. Today, you can purchase the black Ampeg classic SVT or the reissue model of the original "blue line" version released in 1969.

In 1983, Galien-Krueger released the 800RB, the amp that would define the future of the company. The 800RB, as well as the many other RB models that have followed it, are quick responding, relatively small, solid-state amps that pack a mean punch.

Based in Stockton, CA, the Gallien-Krueger brand produces amps capable of providing flawless, clean tones or, with higher gain, the dry, subtle growl that Gallien-Krueger has become known for. Gallien-Krueger amps don't provide excessive character in their tones, but they handle pedals like a beast. If you're into the pedal game, check out a Gallien-Krueger and see if your tone palettes play well together.

British bass amplifier company Ashdown has made products of only the highest quality since 1997. The company's ABM series is the centerpiece of the Ashdown product line and produces its signature sound using a blend of solid-state and dual-triode tube preamp stages. These can be preset and selected by footswitch, providing access to a wide range of clean, warm, and overdriven tones. By combining these technologies, Ashdown has managed to make a modern best-of-both-words hybrid that possesses the quick attack of solid state with the classic tube overdrive. Spot an Ashdown from across any crowded room by looking for its signature input needle gauge.

It doesn't get much higher end than David Eden. These amps are the choice of the pros. You'll find these being played by guys who have "been ripping gigs since before you were born." This is half because of the immaculate quality and reliability of these amps, and half because of the price tag. Play one of these amps and you'll understand: the power, the clarity, the amp construction, it's all there.

Still, one may wonder if it's worth it, shelling out top dollar when there are so many excellent alternatives out there that cost significantly less. Some say yes to this question, some say no – the choice is yours!

Let's jump to the other end of the financial ballpark and talk about the Peavy Mark Series. These amps are workhorses. One of the smartest investments you can make in terms of value, Peavy heads are tanks that provide awesome heavy tones. You might not get the immaculate sound of a David Eden out of one of these, but that's not why people buy them. They are purchased because they're cheap, they work, and they're beastly.

All the Marks are great, but for a nice starting point, check out the Mark IV. Sadly, these little warriors are out of production, but they're still constantly being sold all over the internet and will continue chugging out basslines for many years to come. For the best value in the game, check out these amps.

The grandaddy of them all: the Fender Bassman. The year was 1952 when Fender released this fateful amp that would impact the world of amplification so heavily. While the Bassman was, of course, originally intended for electric bass, the amp commonly ended up being used to amplify electric guitar, harmonica, and keyboards over the years.

It should be noted that the Fender Bassman is an old man in the world of bass amps. It can't keep up with the volume or sheer power of its modern counterparts, so don't even think about cranking one looking to "rock hard," as the kids say. Instead, these amps provide timeless tones for blues, jazz, country, and bluesy rock, especially when paired with a Fender bass.