6 Awesome Ways to Incorporate Keyboard Tracks Into Your Recordings 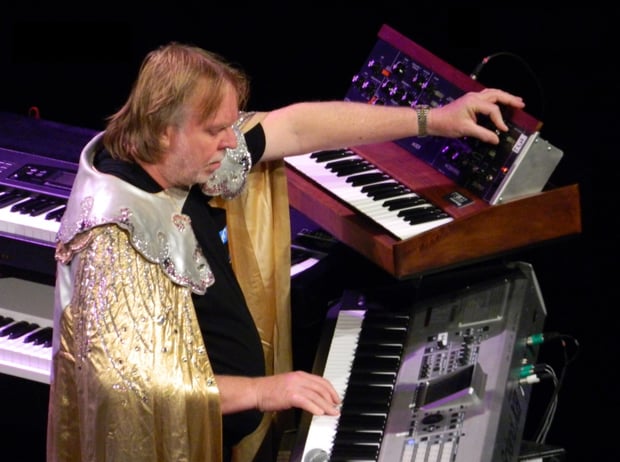 Photo by Aurelio Moraes via Wikimedia Commons / CC BY 3.0

There are bands that are straight-ahead rockers, using only the traditional guitar, bass, and drums. There are others who create all of their music (with the exception of vocals) “in the box” using a digital palette to build tracks. But in today’s musical culture, most artists use some combination of the two: live guitars over synthesized beats, or rock tracks featuring electronic keyboards.

In a studio context, these synth tones don’t always sit well next to unpredictable acoustic sources. Sometimes the keyboard sounds too perfect, too airless, too dead, making your guitars, vocals, and live drums sound too chaotic by comparison. When blending acoustic sources with electronic ones, here are six ways to bridge that gap and add a little grit to your keyboard tracks.

1. Use an analog volume or wah-wah pedal

Most keyboardists started out with childhood piano lessons and are accustomed to the subtle use of the piano’s sustain pedal (and whatever the heck the other two pedals do). You can add similarly subtle, human-triggered color by adding a wah-wah pedal, volume pedal, or other simple effect to your signal chain. This works particularly well when playing a keyboard lead, or when the keyboard provides some kind of funky counterpoint to a groove.

2. Run your keyboard through speakers, and mic them up

To let some air into your keyboard tracks, try running them through speakers and capturing the sound with a microphone. If you use PA speakers, you’ll be replicating your live sound, and you can set the mics back 10 feet or so to capture the natural reverb of your studio space, placing your mics where listeners’ ears would be.

You can also use guitar or bass amps to get a slightly nastier tone (try a bass amp for the left channel, with its lower register, and a guitar amp on the right). That distant mic placement can help you if you’re aiming for the huge arena keyboard sound of a track like Van Halen’s “Jump.”

But beware: you’re liable to lose a lot of your bass and midrange through guitar speakers, resulting in a tone that has a hard time reaching the forefront of your mix. If you have the mics, you can close-mic the cabinets and place others further back, fooling around with the balance until your tone is amazing.

If you’re more a composer than a keyboard player, you’re likely to rely on the preloaded tones of whatever electronic instrument you’re using. It’s expedient for your writing and recording, and the editing process to create new tones might seem intimidating. Don’t be scared – put in the effort, it’s worth it.

If you scroll through the presets, you’re guaranteed to find at least 30 that make you ask, “Who thought this would be useful?” How often do you really need a helicopter sound, or a synthesized tenor saxophone? Well, you can use those spaces to store your own awesome sounds.

Get in there and play with oscillators and wave shapes until something stands out, most likely something that has a change gradient or some sort of random element that makes the tone you get sound more like real life. Besides, you’re going to hear those preset sounds on someone else’s recordings, and that’s like seeing somebody else who wore the same dress to the prom. Be an original.

4. Double up with vocals or acoustic instruments

When you want to make a part really pop, a simple and reliable composer’s trick is to double it with another instrument. You can also use a wordless vocal, like “la la la” or “na na na.”

Acoustic guitar is great for this type of orchestration. Single notes on your classic Martin acoustic will add some shimmer to that airless keyboard tone, but will be so seamless that it won’t be at all obvious how you did it. Doubling a few key notes of the part works well, too. For instance, if you’re playing arpeggiated chords on the keyboard, you could double the first note of each chord.

5. Use a guitar as a MIDI trigger for your electronic instrument

With products like this one, you can use your guitar as a MIDI trigger, a move that’s sure to change the way you approach rhythm on keys. This sort of tool also opens up the expressive capabilities of the guitar and adds them to your keyboard sounds, unleashing note-bending techniques, glissandos, and vibratos.

6. Use an acoustic piano or an old parlor organ

Sometimes the basics are the best, and the sound of a decent piano is hard to beat. You probably don’t have room in your home for a baby grand, but your local college, high school, or church probably does, and they might let you borrow the room to record. See how your composition sounds on a live keyboard.

Another option is picking up a parlor organ. These things used to be in everybody’s house in the 1970s, and it’s not uncommon to see them by the side of the road with a “free” sign on them – like those huge projection TVs, but more useful and less gigantic. You can also pick them up at flea markets and tag sales.

They have internal blowers that play each note on the keyboard like a harmonica, providing a folksy sound that works beautifully with acoustic music and could be the cherry on top in a denser, more aggressive mix. But if you’re at some swap meet looking for one, bring your tuning fork; some of these were never intoned properly when manufactured. The last thing you need in your studio is an instrument that’s permanently 10 cents out of tune.