Songwriting 101: Here's the One Concept You Need to Understand if You Want to Write Catchier Songs 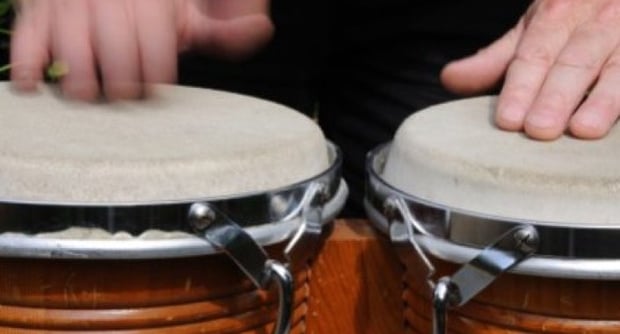 Last week we talked about how chords are lame and melodies are awesome. Don't fight me on this; my PowerLevel is over 9000. This week, we'll go over one of my favorite theories that I used as a Berklee professor. This was the one where my students' eyes would open, and I could see a proverbial light bulb turn on over their heads like in the cartoons. I call it: rhythmic motifs. Aka, repeating stuff.

Cautionary warning: it's gonna get a teenie bit academic here. Don't be scared – it's very easy once you get it!

Listen all the way through. It's awesome, right? Kind of complicated, right? Wrong.

Check out the first line of the verse melody:

Speak the lyric in rhythm while clapping the beat. Don't think about notes, just the rhythm of it. If you then do this for the second, third, and fourth line in the verse, you'll notice that the rhythm in the melody is repeated verbatim throughout the verse, even though the notes change.

The rhythm in a melody is called melodic rhythm.

You lift my heart up when the rest of me is down A (new rhythmic motif established)
You, you enchant me even when you're not around A (repeat)
If there are boundaries, I will try to knock them down A (repeat)
I’m latching on, babe, now I know what I have found A (repeat)

If we were gonna put a formula to this rhythmic motif setup, it would be: AAAA

Same thing applies. This time, the repeats are a little different, but not different enough. Because people are expecting a new idea in a new section, we will start counting back at A. Note that the pre-chorus A is not the same idea as the verse A.

Easy peasy, right? There's one original idea, then three repeats. Most songs do this, or a version of this. Don't be afraid to repeat your good ideas.

So, in a sense, we spent the first minute and 50 seconds listening to three unique melodic rhythms. The rest is repeat, repeat, repeat. This goes to show how little original material you have to think of as a songwriter. The earlier you accept this, the faster you'll be able to write catchy songs. Make one thing up, repeat it three times. Boom. Verse! Make up another thing, repeat it three times. Boom. Pre-chorus! You get the idea.

Disclosure's "Latch" was easy. Not a lot of variation. Let's get a little bit more difficult.

"Willing and Able" by Disclosure

Don't say you want me A (new idea)
Don't say you need me A (repeat)
If you ain't ready, turn around B (new rhythmic motif. It's close to A, but still far enough)
Willing and able A
Cards on the table A
And I believe in what we've found B

Pre-chorus (start counting back at A)

Chorus (start counting back at A)

All of a sudden you see the logic, right? Rhythmic motifs make melodies catchy. If you sing a melody once, it doesn't really mean anything. If you sing it two times, people recognize it and like it better.

Again, this doesn't mean you have to sing the same notes twice, just the same melodic rhythm twice.

For example, the chorus to Leonard Cohen's "Hallelujah":

The melody changes, but the melodic rhythm stays the same. This is why this song is so damn catchy, even if it's not considered "pop."

So in a nutshell, the more you repeat your melodic rhythms, the catchier your song will be. You can still move your notes around, but if you think in rhythmic motifs, the world will lay at your feet and you will finally be able to sit on the iron throne of Westeros.

Start picking apart your own songs, and see how many letters you have to use in your rhythmic formula. Chances are, if you get to D or E within a section, you're probably in trouble!